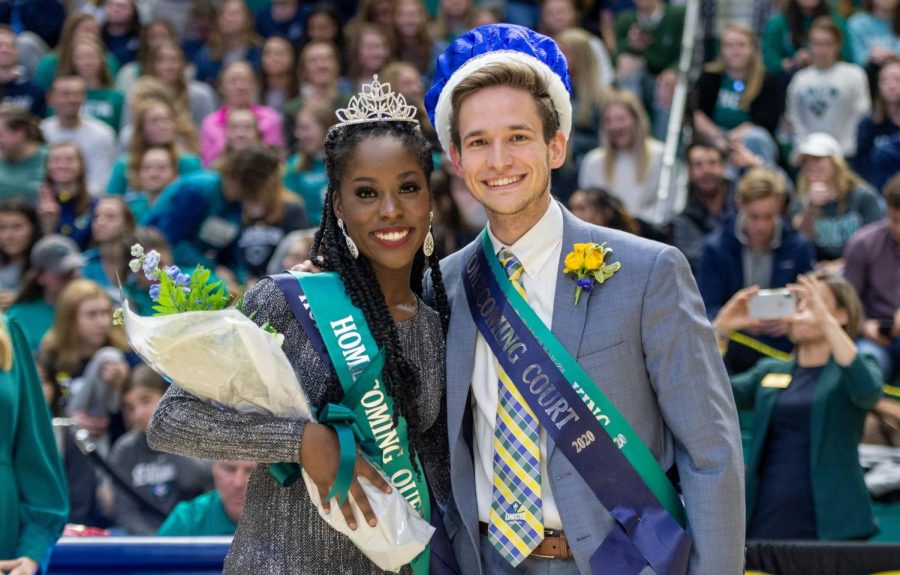 Less than one week following their crowning, I had the pleasure of sitting down with UNC Wilmington’s newest Homecoming King and Queen, Nick Pianovich and Ricki Nelson. Aside from being heavily involved on campus, our King and Queen are as confident, humble, intelligent and kind as one could hope they would be.

Student Body President Nick Pianovich is a true man of the people. While his resume of extracurricular activities at UNCW may speak for themselves, talking with Nick gave me the opportunity to see how deep his passion for advocacy runs.  “I lived in New Orleans until 2005 when Hurricane Katrina brought us here. My aunt called us the day Katrina hit – Aug. 29 – my seventh birthday and we had 24 feet of water in our house.”

Seeing the way that his community banded together to help those in need inspired Nick to do the same. “To this day my mom still has mismatched furniture and appliances from when we first moved in. I asked her why she won’t get new things now that we can afford it, and she told me that it’s because she doesn’t want to forget the people that helped us. That alone is a huge motivator for me to help people and get involved.”

One of the most instrumental stepping stones that our Student Body President took on his collegiate route is being a Resident Advisor on the 5th floor of Galloway. Nick describes his experience as an RA as eye-opening. His compassion, determination and infectious personality, made the residents of G5 feel at home.

From being an RA to helping students bring their clubs and organizations to life at CAIC, Nick has wasted no time in making himself an integral cog in the Seahawk machine. As the Student Body President, Nick has dedicated his time to his peers by trying to understand their perspective. During the interview, Ricki complimented the way Nick has “gone out of his way to start difficult conversations about how they [SGA] can be of better service to our growing minority population.” He responded with the utmost appreciation while stating his focus is perspective. How do we make UNCW appeal to Seahawks from all walks of life? How do we unify our student body?

Unity is an important concept for Nick as it was one of his main platforms during the 2019 SGA election season. “One of the things that I hate about politics is false promises. So when I decided to run, I wasn’t going to sit there and preach about diversity. But there has to be a starting point. As a young university, we have to have these dialogues about perspective. I have a duty to my constituents to be a representative and advocate for all.” He takes his role as an elected official seriously as he stands with the unmatched tenacity to be the President and the Homecoming King that we voted for. “The Homecoming King and Queen encompass what the university wants to be. I think that this is more than just a crown,  it is a symbol for what is to come and what is to be. So yeah, even though at the end of the day what you get is a crown, it means a lot more than that.”

In a society where “isms” have systematically marginalized minorities and at a university that has a Black student population of 4 percent, for many, it has been liberating to see a beautiful, strong, intelligent, black woman take the crown. Ricki Nelson is a force to reckon with. She is the founder and president of UNCW’s Creative Arts Club and current member of Rhyme N Reason and the Black Student Union. As the third Seahawk in her family and the only Black woman on the ballot, Nelson took it upon herself to make a  statement about who she is, where she comes from and how important it is to stay connected to your roots.

Ricki’s awe-inspiring campaign was inspired by Beyonce’s 2018 Coachella performance, more commonly known as “Beychella.” As mentioned in Beyonce’s Netflix documentary, Homecoming, the artistic direction for this iconic show was inspired by homecoming at Historically Black Colleges & Universities (HBCU). Homecoming in the Black community is a cultural staple. From the parades to the band to the festivities, there is an abundant history of invaluable experiences that are cherished by Black people nationwide.

While the winners of the Homecoming Court are deemed as a reflection of the university and the city of Wilmington, Ricki knew that her place on the ballot meant more than that. “As a person of color, you’re never doing anything that is just for you. It’s constantly about the people that you’re representing.” Attending a predominantly white university in a city with colorful racial history can be daunting, but it all comes down to growth and evolution. “I was doing this for everyone who looks like me at this university. It really sunk in the next day at the AAGA [African-American Graduate Association] luncheon when so many older [Black] women came up to me saying things like “You don’t know how long it’s been” or “This means so much for us as a people” hearing their stories and being able to interact with them was incredible.”

Ricki Nelson has made history as the fourth Black Homecoming Queen at UNCW. Her win is not only a celebratory moment for her, her campaign, her friends and her family, but it is a win for her community — the Black community. “Part of the legacy that I want to leave behind is the idea of being bold. A big part of my campaign was to take up space and let people see you. Being such a small percentage on campus, it is easy to fly under the radar. But it’s okay to be visible.” Walking into rooms or sitting at a table where no one looks like you does not mean that you are out of place. Take that opportunity to occupy the room with your indispensable presence and do not apologize for it. Ricki Nelson, just like Beyonce Knowles-Carter, is a Black woman that takes up space and that who is determined to turn lemons into lemonade.

Towards the end of the interview, I asked our royals what it meant to be a Seahawk. Nick answered first with a response rooted in resilience. “I struggle with this because of how young our university is, but being a Seahawk for me is about learning from your mistakes and challenging yourself.”

Ricki chimed in quickly after with, “there’s a lot of positives to the idea that many people might not have a lot of preconceived assumptions about you when you say that you’re from UNCW. So I think we should take that and run with it. Make the experience what you want.”

Attending a university that is less than 100 years old gives us the opportunity to learn with the faculty, staff and administration. They look to us for answers and we the students look to them with questions about life, education and everything else in between. As we were ending the interview, the Student Body President and newly crowned King profoundly looked at me and said, “As Seahawks, we have the unique opportunity to write our own history.”