UNCW rebounded from its loss to Coastal Carolina earlier in the week, sweeping the Hughes Bros. Challenge over the weekend 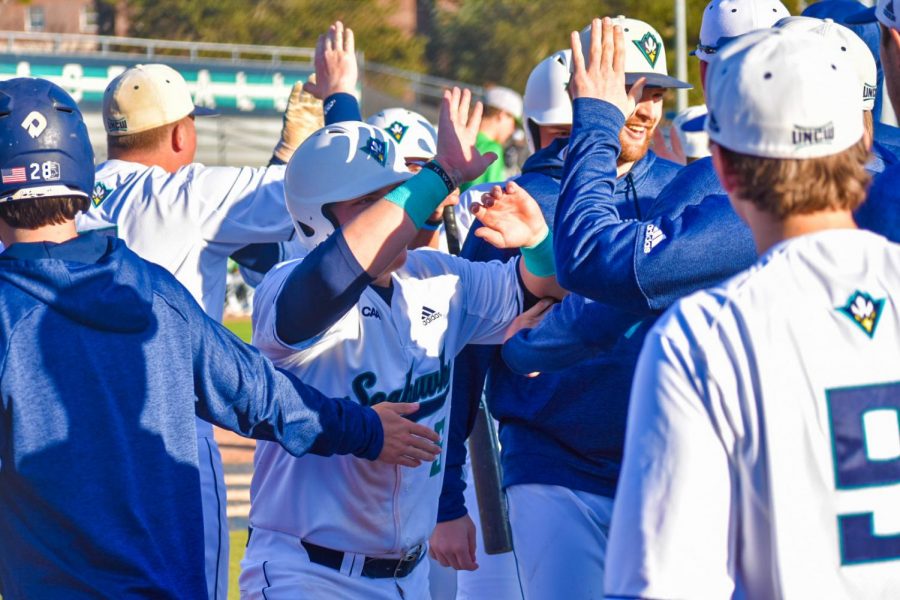 Tanner Wells (51) celebrates with the team after coming across home plate during UNCW's matchup with Marshall on Feb. 22, 2020 at Brooks Field.

WILMINGTON – UNC Wilmington (6-2) rebounded from a 4-3 loss to Coastal Carolina earlier this week with a sweep in the Hughes Bros. Challenge on Saturday and Sunday.

The Seahawks kicked off Saturday’s doubleheader with a 5-2 victory over Bowling Green (1-6) after a nearly perfect day from pitcher Zarion Sharpe.

The left-hander threw seven hitless innings, struck out eight and only gave up one walk. Blake Deatherage started the eighth inning and struck out the side. The righty held the Falcons to their only two runs in the ninth, capping off a much-needed win for the Seahawks.

UNCW’s offense came in the hands of Tanner Wells and Kip Brandenburg. The two drove in all five runs for the Seahawks. Wells had three hits on the day, including a double and a stolen base.

Brandenburg, the transfer from North Carolina, smacked a two-RBI triple in the eighth, giving UNCW a couple of insurance runs to rely upon heading into the ninth, before closing out for the win.

The Seahawks downed Marshall (1-6) 8-1 in the back half of their doubleheader on Saturday.

UNCW’s pitching corp once again showed up to play. Right-hander Landon Roupp racked up seven strikeouts in six innings of work, giving up only one earned run off just five hits. With this performance, Roupp acquired his second win in the young season.

Brandenburg, played his best game of the year thus far. The first baseman had four RBIs against the Herd, including a double that scored three Seahawk baserunners.

Freshman infielder Jac Croom drove in two runs on the evening along with a walk. Noah Bridges once again showed his speed on the base paths, swiping one and upping his season total to seven stolen bases.

At the top of the ninth inning, UNCW looked to keep its 8-6 lead on Marshall and end any hopes of a miraculous comeback. Adam Smith delivered a third pitch strike that found its way onto the dirt, and Matt Suggs applied the necessary tag like any catcher would in order to secure the second out of the inning. Marshall second baseman Luke Edwards did not take the contact kindly, and in the blink of an eye, both benches were cleared. This game was not over yet.

Fortunately, no punches were thrown and both teams were directed back to their dugouts. Smith finished the inning strong, striking out the side to end the game and cap off an action-packed weekend at Brooks Field.

The Seahawks opened the flood gates in the third inning when they scored six of their eight runs. After Suggs was caught stealing second for the second out of the inning, UNCW’s bats came alive. Croom and Wells got things going with back to back singles and later scored on a Marshall error and wild pitch. The Herd had a total of 10 wild pitches during the game, which resulted in multiple Seahawk runs and was the difference-maker down the stretch.

Later in the inning, Bridges once again showed his wheels, racking up an RBI double. This was followed by an RBI single from Brooks Baldwin. The Hawks batted around in the inning and started the top of the fourth with a 7-0 lead.

“We feel confident because we know that we have a good coaching staff and a really good defense,” said Bridges. “We have a really talented roster.”

Senior right-hander Luke Gesell went nine innings for the Seahawks, giving up eight hits and three earned runs while striking out two and walking only one.

Gesell was relieved by the trio of Smith, Will Liverpool and Nick Bruno. Liverpool struggled, giving up three runs in just 0.1 innings of work. However, the redshirt sophomore was picked up by his teammates who finished things off strong in the final innings.

“It’s good to have the older guys behind us and supporting the younger guys,” said Croom. “Seeing the culture here, I knew this is where I wanted to be.”

The ‘Hawks will embark on a four-game road trip this week, which includes a rendezvous with 15th-ranked N.C. State (7-0) on Tuesday and a three-game series with Kentucky (4-3) starting Friday. First pitch in Raleigh is set for 4 p.m. before the Seahawks head to SEC territory to face the Wildcats.

“We are excited for the road trip this week…hopefully we get a good start because we need to start building up some midweek wins,” said head coach Randy Hood. “Getting wins against teams like these are how you build your resume.”