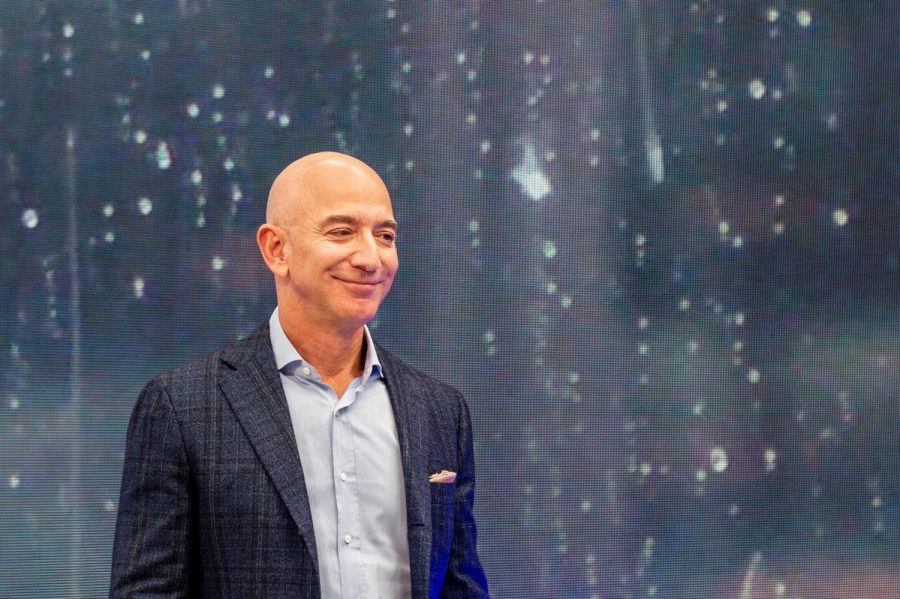 Jeff Bezos, head of Amazon, can be seen on the fringes of the company's novelties event on Sept. 25, 2019. Bezos recently pledged $10 billion toward climate change, a good example of how the rich can help the environment.

Possibly one of the most frustrating things to see on the internet is celebrities retweeting and reposting things such as “donate to help Australia” or “we are in the middle of a climate crisis.” While on the surface it seems great that these influential people are spreading awareness and appear to care about important issues, it is infuriating to know that these people have more money than the majority of people in the world do, yet they appear to do nothing beneficial with it. Of course some celebrities donate money in private, and a lot of them donate publicly, but this trend of having to “bully” celebrities into donating money to charitable causes—especially when it has to do with the environment—is upsetting.

Many people care about the environment, but realistically, most of us are armchair activists. That is, a lot of us will re-post pictures of burnt koalas but not donate actual money to charities or go out and protest—and that is okay. Most college students (and most established adults) do not have the spare income to donate to charities all the time.

However, Kylie Jenner, with her net worth of $1 billion, should not have to be persuaded by the internet to donate a few measly dollars to fight off Australian fires after two weeks of simply re-posting other people’s stories. They need to stop making us feel guilty about it and do something about it themselves.

Celebrities advising people to skip the straw and bring tote bags to the grocery store are welcome and helpful tips, but also really do nothing to help the environment. Plastic straws make up only 0.025% of all ocean pollution, and simply swapping a few plastic items for reusable items is not going to solve climate change.

If celebrities really want to start raising awareness, they need to commit to it, and not just do it when they feel pressured to, or when it is a fun trend. They need to stop wearing different outfits every day, stop using private jets that burn 53 lbs of CO₂ every mile and refrain from using products that contain palm oil.

According to Forbes, it would take approximately $50 trillion to clean up the planet. This number is incredibly high; however, it is broken down into five key areas: renewable resources, electric vehicles, carbon capture and storage, hydrogen power and biofuels. All of these areas already have technology being created around the world and significant research being done into them—so it is not implausible. If the incredibly wealthy people of the world and rulers of nations could cooperate and donate, we would not have to worry as much about the future of our planet.

On Feb. 17, Jeff Bezos (the chief executive of Amazon and the richest man in the world) announced that he was pledging to commit $10 billion to address climate change. This amount of money equates to 7.7 percent of his $130 billion net worth and will be used to help fund activists, scientists and nongovernmental climate organizations.

This monumental act of philanthropy is a fantastic example of the perfect incentive for the extremely wealthy to join in the green wave. While there are so many moral incentives, such as better quality of life, the protection and preservation of wildlife and a cleaner future, the act of investing in climate organizations is also the perfect business opportunity. Green technology is a very profitable up-and-coming market that is always changing, so it would be any smart investor’s first choice. Even though Jeff Bezos’ $10 billion pledge is supposedly purely a donation rather than an investment, he will still remain the richest man in the world, and will undoubtedly make the money back in no time.

One argument a lot of older Americans pose to the younger generation is “Why should I have to change my ways all of the sudden?” The answer, although unsavory, is simple: they will be dead in a few years. We (millennials, generation z, etc.) have a lot of time ahead of us, and families that we intend on creating. Cleaning up the world is not for the older generations, nor is it for ours; it is for our kids and our grandkids. We all can help change the world—and no action is too small.