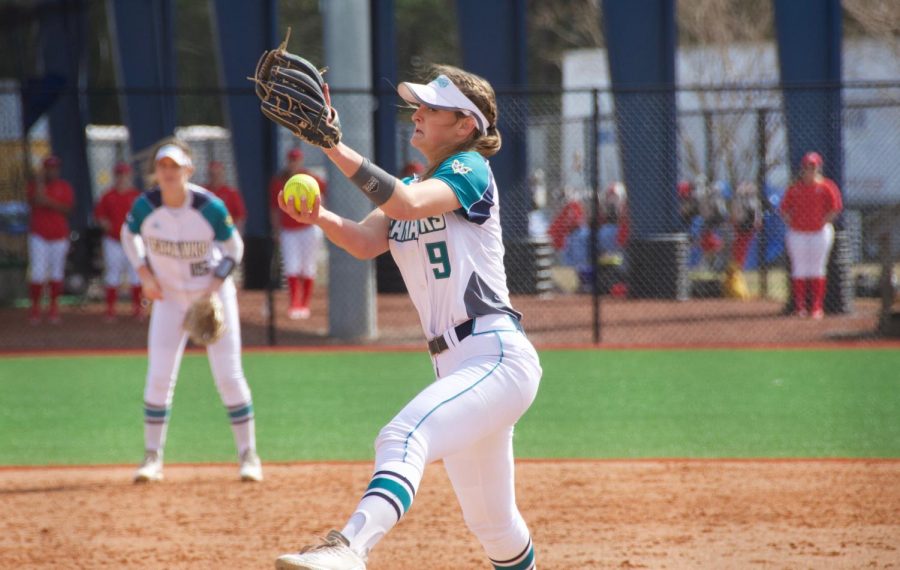 Janel Gamache (9) throws a pitch during UNCW's matchup with Howard in the Fairfield Inn & Suites Seahawk Softball Bash on Feb. 15, 2019.

Each week, The Seahawk will recognize standout performers from UNC Wilmington athletics. Honorees are chosen based on overall performance. Generally, only one athlete will be honored per athletic event.

Dodd’s performance last week against both Elon and William & Mary, which included eight points, six rebounds, three blocks, a steal and an assist against the Tribe, were enough for the freshman to earn Colonial Athletic Association Rookie of the Week honors. He also helped the Seahawks pick up a much-needed win against W&M on homecoming.

Groom swept Campbell’s Ondrej Labik 6-2 and 6-3 last Saturday to earn a singles point for UNCW. He also teamed with Bruno Caula to win a doubles point for the Seahawks. The duo won that set 6-1. That win was the third-straight for the ‘Hawks, who are now 3-3 on the season.

Whimple placed first in the women’s Triple Jump last Friday at the Virginia Military Institute (VMI) Winter Relays. She had a distance of 38-00 — the third best in UNCW history.

Gamache led the Seahawks in their 11-3 win over Howard last Friday at the Red and Black Showcase hosted by Georgia. The sophomore posted two runs for UNCW while batting in three more.

For any tips or suggestions, Sports Editor Noah Powers can be reached via email at njp9594@uncw.edu. You can also follow him on Twitter @NoahPowersSH.