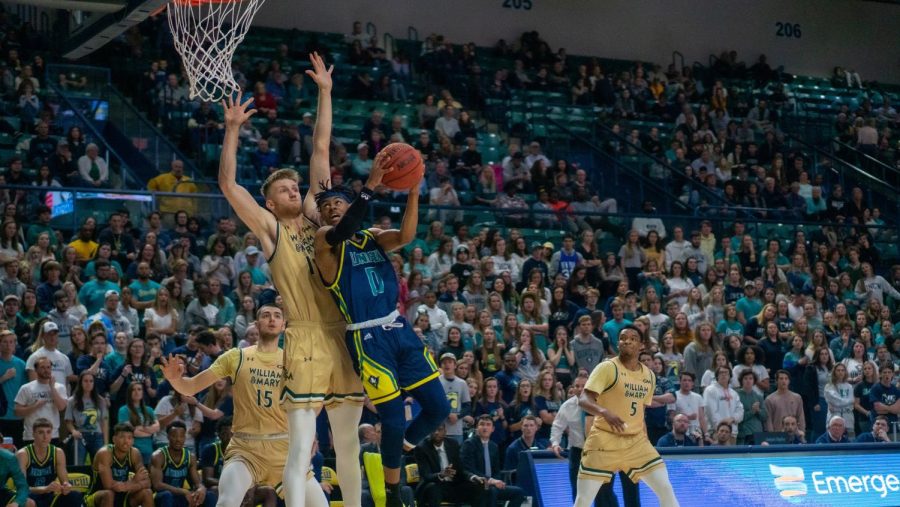 Ty Gadsden (0) attempts to shoot against a defender during UNCW's homecoming matchup against William & Mary on Feb. 8, 2020 at Trask Coliseum.

The Seahawks snapped both an eight-game losing streak to the Tribe and their previous three-game losing streak, improving their record to 8-18 overall and 3-10 in conference play. Interim head coach Rob Burke’s record since taking over now stands at 3-5, which had the Seahawk student section chanting, “Hire Burke” in the game’s final seconds. Junior forward, Mike Okauru seconded the notion postgame saying, “I want to start a hashtag; hashtag ‘HireBurke’.”

“We’re just going to keep doing what we’re doing,” said Burke on the continued fan support. “We’ve got our blinders on. I love the fans that are behind me, but we’ve got more work to do.”

It was an all-around team win, with eight players scoring throughout the game and six of them scoring in a 17-3 run during the second half that solidified the win. Okauru led scoring for the Seahawks with 15 points and was closely followed by Jaylen Sims with 14 and Marten Linssen with 10.

UNCW trailed by as much as 14 early in the first half before closing the gap and entering halftime trailing 35-34, going on a late 6-0 run. Early in the second half, W&M led 45-41 before the Seahawks went on a 10-0 run that started with a big three-pointer from freshman guard Jake Boggs. This momentum shift turned into the Hawks’ 17-3 run which was closed by sophomore guard Brian Tolfree’s and-one with less than eight minutes remaining, giving the team their largest lead of the game, 64-54.

“Our guys bent, but didn’t break,” said Burke with pride for his team’s tenacity.

UNCW’s intensity on defense and its press and pushing the ball on offense were the keys to their victory. They scored 26 points on fast breaks and 28 off turnovers.

The Seahawks embark on their final road trip of the regular season next week as they take on Northeastern on Feb. 13 and Hofstra on Feb. 15.