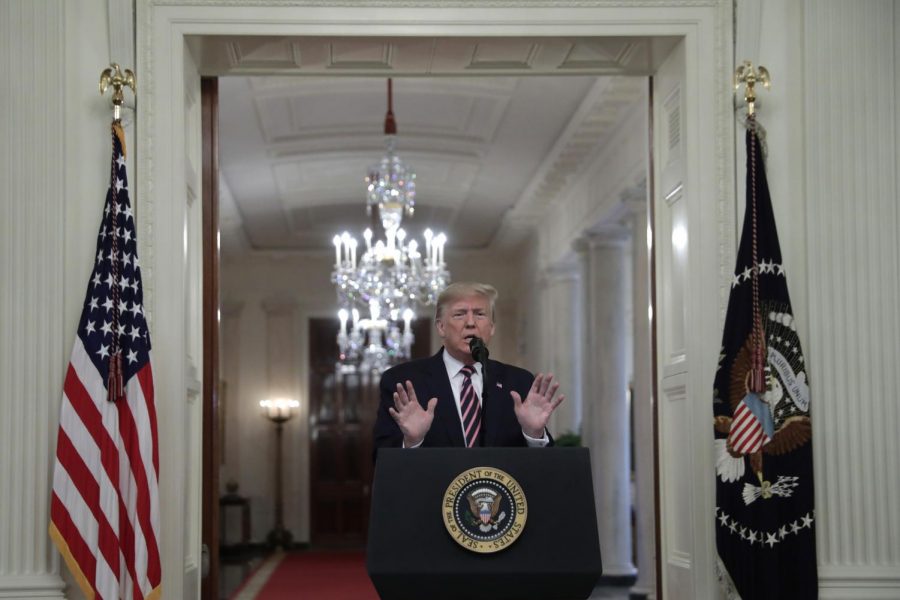 U.S. President Donald Trump delivers remarks about his Senate impeachment trial in the East Room at the White House in Washington on February 6, 2020. (Yuri Gripas/Abaca Press/TNS)

WASHINGTON — The US Senate voted Wednesday evening to dismiss the charges of impeachment against President Donald Trump, the third president in American history to face formal impeachment.

In the first article of impeachment concerning abuse of power, Senators voted 52 to 48 in favor of “Not Guilty.” Similarly, on the second article carrying the charge of obstruction of a congressional investigation, the Senate voted 53 to 47 in favor of a “Not Guilty” verdict.

The Senate was unable to reach the super majority vote of two-thirds or 67 of 100 Senators in favor of formally passing the charges of impeachment on either count.

The votes were split down Democrat-Republican party lines, with only Senator Mitt Romney (R-UT) breaking rank from his party to cast his vote for the charge of “Guilty” for the second article. Senator Romney stated that Trump’s actions surpassed allegiance to the party and was a matter of “conscience.” He is the first Senator to ever vote for removal of a president of the same party.

The impeachment trial had been delayed by nearly two months after the articles of impeachment were first passed in December 2019. The Democrat-controlled House of Representatives had held back from delivering the articles to the Republican-controlled Senate who had preemptively stated that they would not allow witnesses if the impeachment was to go to trial.

Previously, on Friday, Jan. 31, the US Senate followed through on this statement and officially voted to not allow witnesses at the impeachment trial, which led to predictions that Trump would be acquitted of all charges.

The two articles of impeachment, abuse of power and obstruction of Congress, were directly rooted in the results of an investigation into Trump’s activities after he withheld military aid to Ukraine. Allegedly, the reason for this disruption in aid delivery was meant to pressure Ukraine to engage in an investigation of their own into former Vice President and Democrat Presidential candidate Joe Biden and his son Hunter Biden.

As the congressional investigation into the allegations of presidential abuse of power progressed, in October 2019 Trump issued a mass order for all government agencies to not comply with the investigation, prompting the eventual obstruction of Congress and abuse of power charges for impeachment.

Now celebrating his acquittal, President Trump today claimed victory against the accusations in his first public appearance since the conclusion of the trial, lashing out and referring to his opponents as “evil” and “corrupt.” He also continued to characterize the investigation and trial as a partisan witch-hunt, much as he has described previous investigations.

However, the end of the impeachment trial does not mean the investigation is over. House Democrats have shown their interest in continuing to seek answers from witnesses they were unable to call to trial, and Senate Republicans are making moves to investigate Hunter Biden’s business ventures while his father was serving as Vice President. Meanwhile, 2020 candidates on either side are continuing their bid, using the results of the impeachment to propel their respective campaigns.