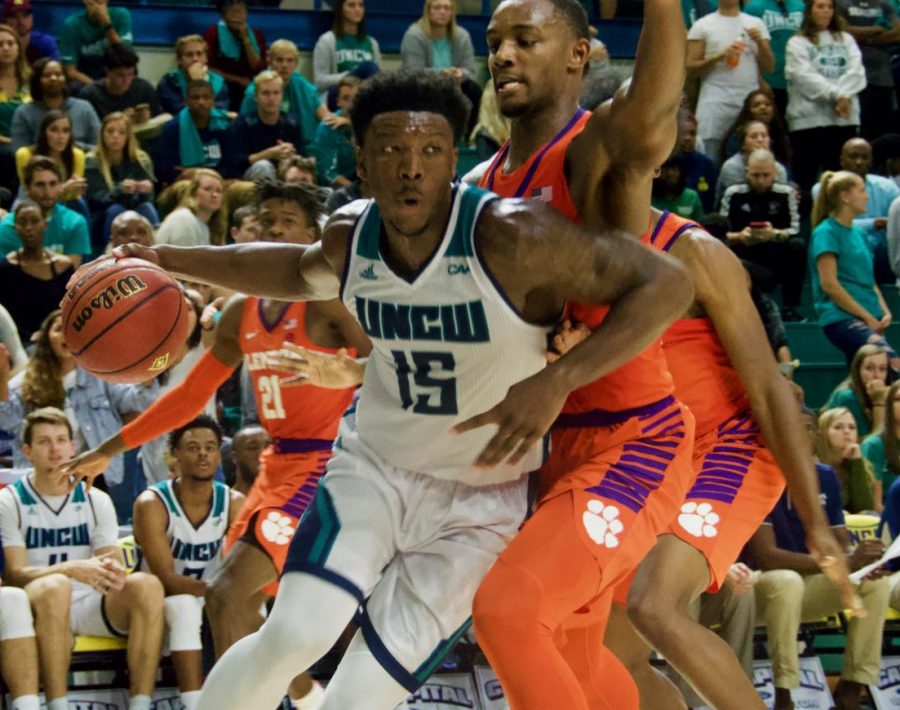 Devontae Cacok (15) attempts to drive in for a layup

The 2010s were an absolute rollercoaster for UNC Wilmington athletics. Seahawk fans saw highs, lows, conference championships and single-digit-win seasons. That, however, is the nature of the beast for a mid-major like UNCW.

In the spirit of the turning of the decade, here is a look at the top 10 teams who brightened the last 10 years of Seahawk athletics.

Before delving in, there were a lot of deserving teams who, due to overabundance of great seasons, were excluded from the list. In the spirit of giving credit where credit is due, we can start with our honorable mentions (and even with honorable mentions, there are still some phenomenal teams excluded).

UNCW softball found a spark in 2017, pounding out a 35-20-1 record. Despite losing a heartbreaker 9-6 to Hofstra in the Colonial Athletic Association tournament, the Seahawks’ overall performance earned them a spot in the Lynchburg Regional of the National Invitational Softball Championship along with Liberty, Campbell, Ohio and Iona. UNCW lost to Liberty in game one but bounced back with wins over Campbell and Iona before falling to Ohio to close the season.

Contrary to popular belief, there was a UNCW women’s basketball program before the start of the Karen Barefoot era. In 2011-12, the Seahawks put up a 22-13 record before losing 66-39 in the CAA tournament. UNCW’s season spoke for itself, as the Seahawks booked a ticket to the Women’s National Invitational Tournament where they hosted and eventually lost to Appalachian State 79-73.

UNCW baseball, especially under coach Mark Scalf, was the pride of the Port City. 2013 was no exception. In 2013, the Diamondhawks went 38-23 with key wins over Coastal Carolina and North Carolina, the latter of which advanced to the 2013 College World Series. UNCW advanced to the Charlottesville Regional where it fell in the losers’ bracket to Elon.

Once again, you can expect to see a lot of UNCW baseball on this list. In terms of consistency, Seahawk baseball essentially defined the decade for Wilmington. In 2012, the Diamondhawks went a solid 39-24, won the CAA tournament and advanced to the Raleigh Regional where they fell to host North Carolina State.

Like baseball, men’s soccer at UNCW has been a highlight in terms of consistency. Head coach Aidan Heaney has the program in a great spot and the 2019 season was no exception. Men’s soccer finished 12-5-2, going nine games from Oct. 5 to Nov. 10 without a loss. This meant the Seahawks hosted the CAA tournament, where they fell to James Madison 1-0 in double-overtime in the championship game. Hopeful that its performance would be enough for an NCAA tournament bid, UNCW was disappointed to find it had been excluded from postseason play.

With notable seasons in 2013 and 2014, the Seahawks had high hopes for 2015 — with good reason. Volleyball finished 24-8 that season. With wins over North Carolina, Appalachian State, Campbell and Elon, the Volleyhawks would have claimed the Tar Heel State as their own if not for a tough loss to Duke. Still, the team was CAA regular season runner-up and won the CAA tournament, earning a bid to the NCAA tournament. No. 23 North Carolina, which the Seahawks knocked off in the regular season, swept UNCW in the first round.

The Kevin Keatts era was something special for UNCW men’s hoops. UNCW became one of the top mid-majors on the east coast, winning several conference titles and making its presence known on a national scale in the NCAA tournament. The 2015-16 season was a precursor for what would happen at the end of the next season when N.C. State hired Keatts after firing Mark Gottfried. In 2015-16, the Seahawks won their first CAA title in nearly a decade, earning them a spot in the NCAA tournament. Unfortunately, as seeding would have it, in the round of 64, UNCW got a Duke squad with Grayson Allen, Amile Jefferson, Marshall Plumlee and Brandon Ingram. Even still, the Seahawks nearly pulled the upset only falling 93-85.

In 2019, UNCW baseball was average at best. The Diamondhawks finished 32-31, with a .500 conference record (12-12). There were, however, several key aspects that made what would have been a run-of-the-mill season for any other team a great one for UNCW. First of all, the Seahawks were not expected to win a CAA championship. It took a one-run win in 10 innings for UNCW to knock off a really good (39-24, 19-5 CAA) Elon team. Had it not been for that win, the Seahawks would have absolutely been excluded from the NCAA tournament. The other major factor in making 2019 great for UNCW baseball was the emotional retirement of long-time head coach Mark Scalf. The Seahawks earned a bid to the Chapel Hill regional — fittingly where Scalf got his start as a coach — where they lost to no. 14 UNC and once more to Tennessee in the losers’ bracket.

In 2017, the Seahawks picked up a key win over no. 3 North Carolina early in the season. UNCW went on to finish 12-8 (5-3 CAA), advancing to the CAA tournament finals before falling to William & Mary in the title game. The Seahawks’ performance that season earned them a bid to the NCAA tournament where they downed Presbyterian in the first round before falling to third-ranked UNC in round two. 2017 was significant because it was the first of three consecutive runs to the CAA championship game, and one of two back-to-back NCAA tournament bids.

In 2015, women’s soccer brought a new flavor to UNCW. After going 15-7-1 (6-2-1 CAA), the Seahawks were unable to capture a CAA title, but, based on regular-season performance, still advanced to the NCAA tournament where they made the most of their bid. A rarity in UNCW athletics, the Seahawks won in the first round, topping South Carolina 2-0 before falling to Virginia 2-0 in the second round.

The best season of the decade for women’s hoops, the Seahawks posted a 25-9 (14-4 CAA) finish to the season. Despite falling hard 62-47 to Delaware in the CAA tournament, postseason hopes were still alive for the Seahawks who had performed well all season. A trip to Richmond proved victorious in the first round of the WNIT before UNCW fell, as host, 63-54 to Eastern Michigan in the second round. This season acted a preface for the 2011-12 season where the ‘Hawks found much of the same success.

The Seahawks finished 39-23 (14-9 CAA) in 2018, winning the first of back-to-back CAA tournament titles. UNCW swept North Carolina, which was ranked no. 6 the first time the squads squared off and went on to play as the four-seed in the Greenville Regional along with one-seeded East Carolina, two-seeded South Carolina and three-seeded Ohio State. Despite being the clear-cut underdog behind two power-five teams and a juggernaut ECU squad, the Seahawks advanced to the regional final in the losers’ bracket falling 8-4 to South Carolina.

After an underwhelming 9-6-2 finish to the 2013 season, UNCW men’s soccer was in need of rejuvenation. They found that in 2014. A Seahawk club that fielded seven returning seniors posed a force to be reckoned with in the CAA. UNCW went 13-5-2 (5-2-1 CAA), falling short in the CAA tournament but redeeming itself in the first round of the NCAA tournament. The Seahawks knocked off Bucknell 2-0 before eventually falling to Virginia 3-1 in the second round.

The Seahawks put up extraordinary numbers between 2015 and 2016, posting a total record of 82-37 (34-11 CAA). Both seasons produced runs to the championship game of the CAA tournament, with the Seahawks winning the title in 2015. The Diamondhawks also made significant pushes in the NCAA tournament both years, going to the Baton Rouge Regional and the Columbia Regional respectively. UNCW lost in the regional final both seasons, falling to South Carolina in 2016 and no. 1 Louisiana State in 2015. 2015 and 2016 were also two of the four seasons the Seahawks would advance to an NCAA regional in a five-year span, with the other two coming in 2018 and 2019.

With similar markings to the 2015-16 season (CAA title, NCAA tournament bid, etc), one thing was different for UNCW men’s hoops in 2016-17 — the real beginning of the Devontae Cacok era (he was a freshman on the 2015-16 squad, but did not see significant playing time until his sophomore season). For context, Cacok went undrafted in the 2019 NBA draft but was eventually picked up by the Los Angeles Lakers. He currently plays on a two-way contract with the Lakers’ G-League affiliate the South Bay Lakers. During his time at UNCW, Cacok set numerous records (rebounds and double-doubles to name a couple). He also became the only player in NCAA basketball history to lead three different statistical categories in three separate years (field goal percentage, 2016-17; rebounds, 2017-18; double-doubles, 2018-19). In 2016-17, the Seahawks finished 29-6 (15-3 CAA). They won the CAA tournament and took on Virginia in the round of 64 of the NCAA tournament. Like the 2016 NCAA tournament, UNCW held its own against its highly touted opponent, only falling 76-71.

Sports Editor Noah Powers can be reached by email at [email protected] or on Twitter at @NoahPowersShwk.