“I heard you paint houses”: The Irishman review 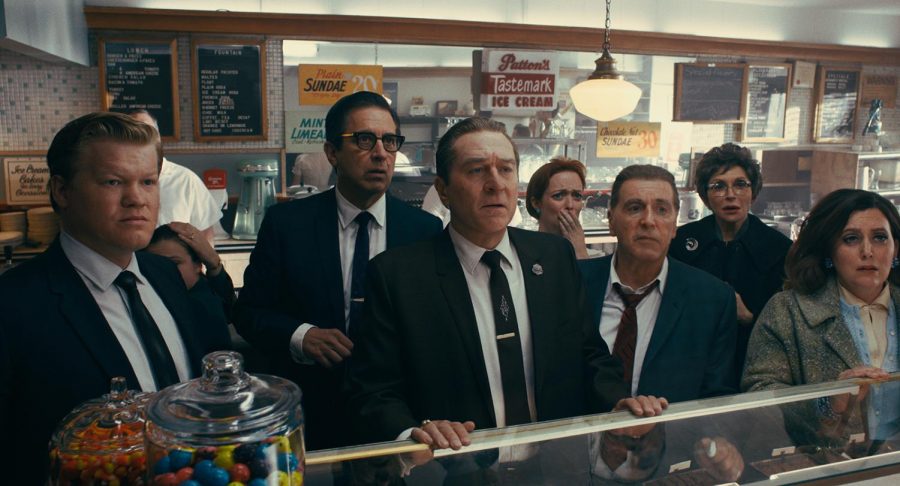 From left to right, during a break in the trial of Jimmy Hoffa, Chuckie O'Brien (Jesse Plemons), Bill Bufalino (Ray Romano), Frank Sheeran (Robert De Niro) and Hoffa (Al Pacino) are shocked at the news of JFK's assassination in a scene from "The Irishman." (Netflix/TNS)

William Becker, Staff Writer
If you are any kind of film buff or even have a mild interest in movies, you probably know who Martin Scorsese is. If you don’t, watch “Taxi Driver,” “Raging Bull,” “The Wolf of Wall Street” and more, then come back to this review. If you have seen any of these movies, you have probably heard of Al Pacino and Robert De Niro.
“The Irishman” is Scorsese’s most recent film, and its method of release was certainly interesting, to say the least. It saw a limited theatrical release on Nov. 1, before coming to Netflix just 26 days later. While in theaters, it made only 7.5 million dollars on a 159 million dollar budget, which is shocking but also somewhat unsurprising, considering that it is three and a half hours long and a period-setting crime drama. Al Pacino, Joe Pesci( who came out of retirement for this film) and Robert De Niro are the stars here, each of whom “de-aged” for the film. It is painfully obvious that Robert De Niro is not in his twenties (in real life, De Niro is 76), but after about twenty minutes, it stops being distracting and becomes more entertaining watching actors act much younger than they are.

The most basic summary that I can give of the movie is that Frank Sheeran (Robert De Niro) is a truck driver who finds himself quite randomly giving his shipments to a local gangster in secret. He quickly gets caught, then is helped by lawyer Bill Bufalino (Ray Romano) who then introduces him to his cousin, Russel Bufalino (Joe Pesci). Bill Bufalino was famous for being labor union leader Jimmy Hoffa’s (Al Pacino) long-term legal counsel. If that sounds a bit overwhelming on paper, it is almost just as overwhelming in the movie, which feels like just as much of an epic crime drama as it does a history lesson about a really specific part of American history. Robert Kennedy and John F. Kennedy also make important appearances. There are an absurd amount of characters and side stories woven in, which more than justifies the three and a half hours of run time.

The movie’s insane amount of characters, in-depth history lesson and behemoth length don’t do anything to make the film less enjoyable to watch. Every character feels interesting and alive, which makes the film feel as though you are entering into an entire world. Every scene has so much depth and brings to life an era of history that is so far behind today’s world, from the set designs to the music, to the character interactions and even the accents and manners of speech. It is world-building on the same level of impressiveness as “Lord of The Rings” or even “The Godfather.” One of the most fascinating ways that this world-building is done when characters are introduced, a small subtitle gives their names and how they were killed, which is never something as harmless as “natural causes.”
Scorsese paints an intense, vivid picture of the mob in the 50s, 60s and 70s. Like many of Scorsese’s films, “The Irishman” requires a certain amount of dedication to actually make it through. In the right place and time, and with an intermission about halfway through, it is a very rewarding watch, especially when you get to the final thirty minutes, which is one of the most harrowing conclusions I have ever seen in a film. The ending seriously makes up for the somewhat bloated length.
“The Irishman” is a world that is both disturbing and keeps calling the viewer back to it. It is a joy to watch, but the runtime serves as both a curse and a blessing.
Delete Image
Align Left
Align Center
Align Right
Align Left
Align Center
Delete Heading