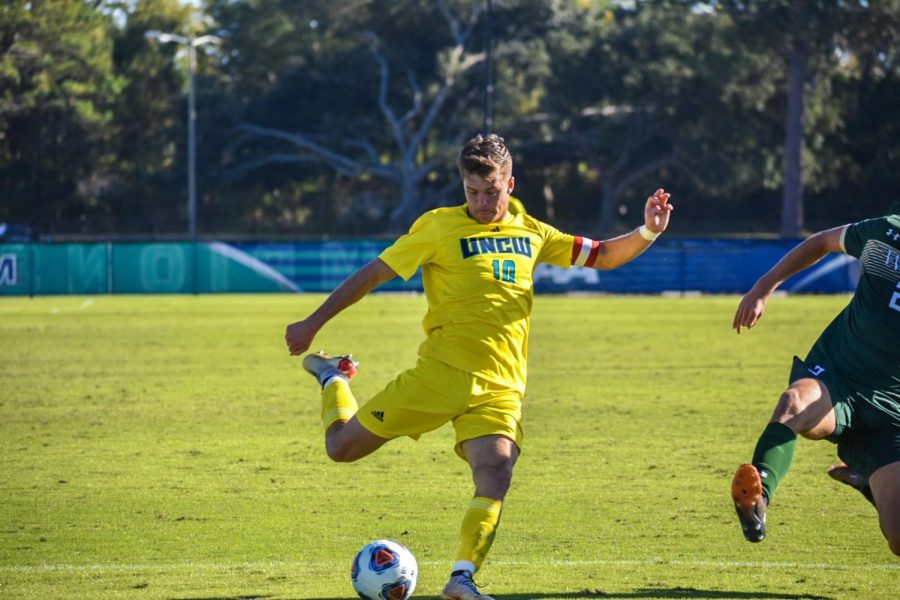 Phillip Goodrum (10) during UNCW's matchup with William & Mary in the semifinals of the 2019 CAA Tournament.

After finishing the regular season on an eight-game unbeaten streak, one-seeded UNC Wilmington (11-4-2) hosted four-seeded William & Mary (7-8-2) in the semifinals of the 2019 CAA Men’s Soccer Tournament.

Danny Reynolds netted the first goal of the game on a penalty kick in the 11th minute of the first half. This marked the fourth goal on the season for the 2019 CAA Defensive Player of the Year.

The Tribe were quick to respond, scoring a goal of their own in the 22nd minute of the first half. Diba Nwegbo and John Eberle both assisted on the goal that was scored by freshman Alexander Levengood; his seventh of the season.

With the score tied 1-1 at the half, senior Phillip Goodrum helped push the Seahawks ahead with his goal in the 65th minute of the second half. Goodrum’s 11th goal of the season was assisted on by teammates Mason Schuster and Ryan Graham.

“To score on a day like today is huge, but it’s not about me, it’s about the team,” said Goodrum. The senior’s 32nd career goal ties him with Erwin Mercado for fourth all-time on career goals list.

The ‘Hawks stayed ahead of the Tribe and came away with a 2-1 win. The home victory secured UNCW a spot in the 2019 CAA Tournament Championship game — which it will host next weekend.

“Getting the win in front of the home crowd today means a lot; it’s why we do it,” said Goodrum.

The Seahawks will get another week of rest and avoid traveling as they will host their opponent for the second week in a row; which could prove to be a huge advantage for UNCW which has not lost at home this season.

“It’s the little things like being able to sleep in your own bed and play in front of your home crowd that could be the difference maker,” said Goodrum.

UNCW will host James Madison on Saturday, Nov. 16 at 7 p.m. The Seahawks will look to finish undefeated at home and secure the 2019 CAA Championship.