Seahawks toppled by No. 9 North Carolina 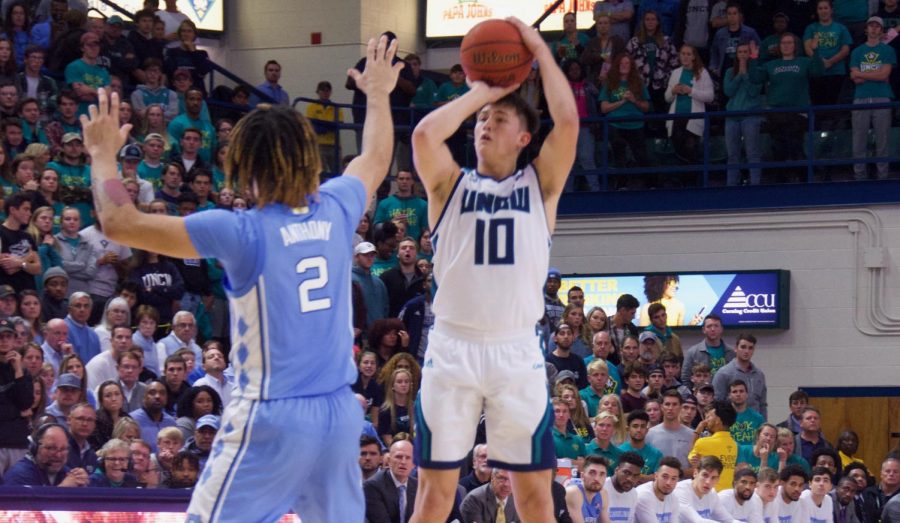 Kai Toews (10) attempts a three-pointer during UNCW's matchup with North Carolina on Nov. 8, 2019 at Trask Coliseum.

WILMINGTON — UNC Wilmington played one of its most anticipated games of the season Friday night, falling 78-62 to No. 9 North Carolina at Trask Coliseum.

The Tar Heels’ trip to the Port City marked only the third time in history that Trask opened its doors to a nationally ranked opponent (Wake Forest, 1977; Charlotte, 1992). UNC also joined Wake Forest and Boston College as the only three Atlantic Coast Conference teams to play in UNCW’s 43-year-old arena.

The Seahawks (1-1) came out of the gate strong taking an early lead. That lead was short lived, however, as the Tar Heels (2-0) opened up before taking a 40-29 lead at the half.

After the intermission, it was all UNC as the Tar Heels held a double-digit lead through most of the second half. The effort was led by freshman Cole Anthony who had 20 points and 10 rebounds. Unbelievably, a downgrade from his 34-point performance on Wednesday night.

Having played just one game in a Carolina blue uniform, Anthony has already cemented himself into the UNC history books. After his breakout performance against Notre Dame, Anthony is second in points by a UNC freshman, first in 20 or more points during his first game as a Tar Heel (broke Lennie Rosenbluth’s record of 30 points) and is one of three freshmen to have 20 points and 10 rebounds in his debut as a Tar Heel.

Anthony was also helped by Garrison Brooks and Justin Pierce, who both contributed double-doubles of their own (18 points and 12 boards apiece).

The Seahawks were led, once again, by Jaylen Sims who put up 12 points and 10 rebounds — his first career double-double. Sims was followed closely by freshman Shykeim Phillips who had 12 points to go along with five rebounds.

Similar to their season opener against Johnson & Wales on Tuesday night, the Seahawks relied on their depth. Nine players had points tonight, with three scoring in double figures.

One of the more interesting matchups of the night was between point guards Toews and Anthony.

“It was just a great opportunity to me personally, just to measure myself,” said Toews of guarding Anthony. “He’s a great player, I respect his game, but I wanted to come out and just show that I could hang with a guy like that. It was an awesome experience for sure.”

UNCW was able to hold its own through much of the first half. The Seahawks were able to force five turnovers out of UNC before the break. To many, including UNCW head coach C.B. McGrath, this game acted as preparation for the challenges the ‘Hawks may face when Colonial Athletic Association play picks up.

Our guys know that we played against some of the best (tonight). I mean, Cole Anthony obviously has a great chance to be an All-American, National Player of the Year, and our guys competed with him the entire game,” said McGrath. “That should give them confidence going forward, knowing that we’re going to play some really good players and teams in the league too.”

This contest was game two of a three-game series between the Seahawks and the Tar Heels — a series that means a lot to both North Carolina head coach Roy Williams and McGrath. McGrath had been under Williams as either a player or coach since their time at Kansas. McGrath’s move to Wilmington was their first time apart in over 20 years.

“He’s (McGrath) one of my favorite people in the world,” said Williams. “He played for me, he coached with me and I think the world of him…and his entire family.”

The Seahawks will wrap up their three-game homestand on Tuesday, Nov. 12 as they host Campbell. The Fighting Camels are 2-0 to start the season with wins over Coastal Carolina and Central Penn. Last year, UNCW fell 97-93 in overtime to Campbell to open the season.