Sims: “I feel like we’re building something very special." 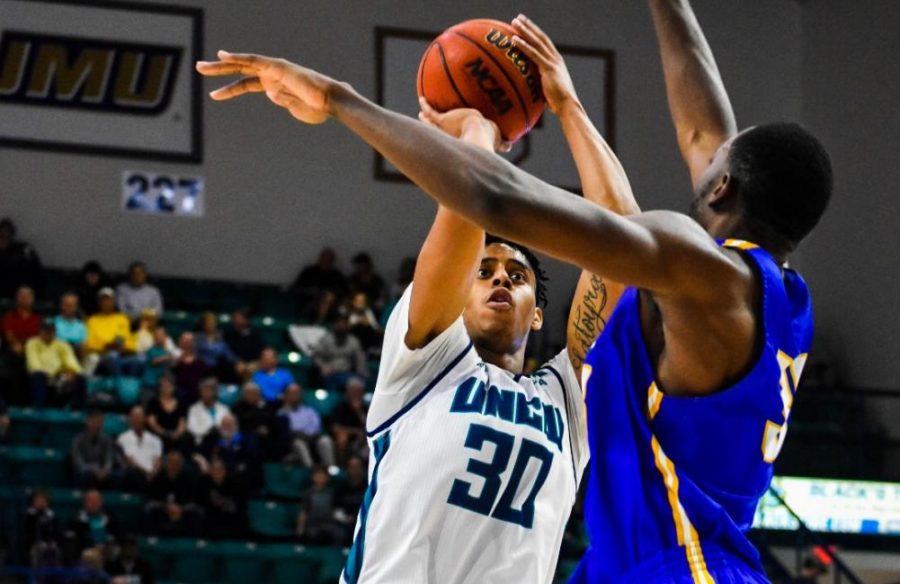 WILMINGTON — A well-rounded performance, made sweeter by a triple-digit score, boosted UNC Wilmington over Johnson & Wales 103-83 on Tuesday night.

The Seahawks landed 49.3 percent of their shots of the night while going 11-for-30 from beyond the arc.

Leading the effort was Jaylen Sims who posted 19 points, two rebounds, two assists and two steals. As one of the few remaining members of the team from last year’s roster, Sims has carried some of the responsibility as a leader this season.

“It was important to establish a culture and have everybody buy in to what we’re building,” said Sims to stepping up as a leader this season. “I feel like we’re building something very special.”

Despite eight of the 13 players seeing the floor in Trask for the first time tonight, new players went for 63 points — 61 percent of the Seahawks’ scoring total. Leading the new guys was Jake Boggs who had 13 points on 4-for-8 shooting.

“I just think my teammates did a great job of helping me out, showing me the ropes and letting me just be comfortable,” said Boggs of his performance. “I think we played good, we’ve got some things to work on and we’ll address those things tomorrow in practice.”

As far as season openers go, it does not get much more balanced than the Seahawks were tonight. All 12 active members of the roster saw the floor, and even further, all 12 scored at least a point.

“Hopefully got a few of the opening-night jitters out of the eight guys that hadn’t played here before,” said head coach C.B. McGrath. “I told the guys ‘the good news is everybody scored a point, so they can stop celebrating when they score and get back and play defense.’”

Though it may not be quite as balanced as it was tonight, McGrath intends to use as many players as he can this season.

“I’d like to use all of the guys, as long as they are being productive on the court,” said McGrath. “I’m not just going to put them in to put them in.”

As the Seahawks add this win to their belt, they turn their focus to Friday night’s action.

UNCW hosts No. 9 North Carolina, making only the third appearance by a ranked team in Trask Coliseum’s 43-year history (Wake Forest, 1977 and Charlotte, 1992). The Seahawks will get the Tar Heels fresh off their season-opener against Notre Dame tomorrow night.