The Lighthouse review: movie of the year 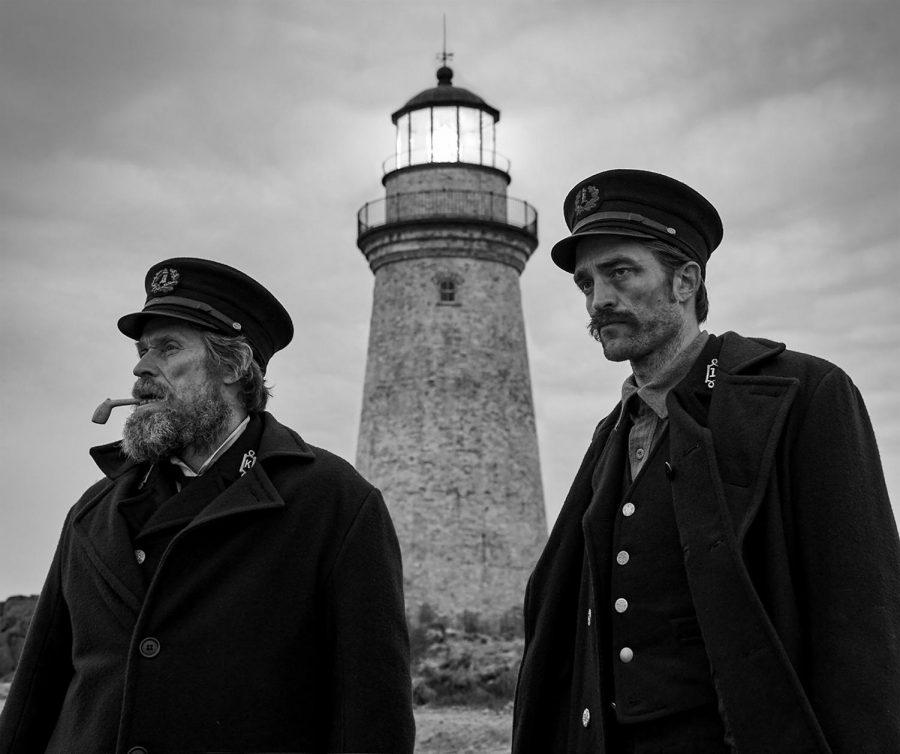 Willem Dafoe and Robert Pattinson in "The Lighthouse." (Eric Chakeen/A24/TNS)

In 2015, Robert Eggers made his directorial debut with “The Witch,” which received massive critical acclaim. The film is a slow-burning masterpiece of horror, so when it was announced that he was writing and directing a second film, critics and fans alike were ecstatic. A24, the production company behind “The Lighthouse,” has been consistent in releasing and distributing stellar films, such as “Midsommar,” ”Hereditary” and “Ex-Machina.” Going in to “The Lighthouse,” I had a deep-seated feeling that I was going to witness something impressive; most A24 movies are generally high in quality. “The Witch” was a stunning directorial debut, so already there was a pretty high bar. I went into the film with no context, knowing it only that it featured Robert Pattinson as Ephraim Winslow and Willem Dafoe as Thomas Wake.

“The Lighthouse” is filmed entirely in black and white in a 1.19:1 aspect ratio, which is altogether reminiscent of early silent film. At first glance, it might seem like a hindrance or merely an interesting aesthetic; however, as time goes on, it feels rather purposeful—as if there can be no distraction from the focus of the audience. The monochrome stylistic choice also serves to darken each scene, leaving the pure focus on the occasional wide shot or the impressive facial acting of Robert Pattinson and Willem Dafoe. If not for the high quality and lack of film grain, someone could easily be persuaded that the film was released in 1939, not 2019.

From the start of the film, there are a lot of shots that feel purposefully drawn out, silent and repetitive. Each one feels lonely and desolate, creating an overwhelming atmosphere that floats like a misty fog over the entirety of “The Lighthouse.” For the first 10 minutes, there is no significant dialogue. With its black and white color scheme, ambient noise soundtrack and clever use of silence, it almost immediately begins to feel like a David Lynch film, only much more linear.

From a sound design perspective, there are a lot of interesting choices going on, all of which are mildly monotonous but drone and grow in such a way that serves to build tension. There is the never-ending groan of the foghorn at night, the sharp ticking of the clock inside the house and the sound of Winslow’s shovel cutting through hundreds of pounds of coal. The ever-constant beats of all of these sounds interlace between Winslow working the entire movie tirelessly, be it either cleaning the floors, feeding the furnace with coal or pouring kerosene into the lantern. The dread on display here is unbelievable and, when combined with the repetition, creates a world that is as mesmerizing as it is surreal.

Willem Dafoe delivers several monologues throughout the film that are almost Shakespearean, which is the one criticism that I have of the film. The monologues are so dense and poetic that “The Lighthouse” almost requires rewatching to come even close to grasping all of the allusions to mythology and how they relate to the plot of the film. His acting is deranged and layered, crafting this character that almost does not even feel real. While Robert Pattinson delivers a particularly compelling performance, other critics agree that Dafoe is the highlight here.

By the third act, the entire structure and meaning becomes unhinged and devolves into chaotic disconnection. While the movie initially was very linear and easy to understand, by the end, it becomes ambiguous, and the narration starts to feel unreliable. One cannot help but want to see the film a second or third time to pick up on the symbolism and minor details. From a writing perspective, the film becomes incredibly layered and artistic while never seeming to lack focus like similar abstract movies. It is not a traditional horror movie with jump scares, a bass-heavy soundtrack and a chronological structure, but instead, it is something of a hallucinatory, surreal, experimental masterpiece. This year has been excellent for exciting and thought-provoking films, with movies like “Joker,” “Ad Astra,” “Ready or Not” and “Once Upon A Time in Hollywood,” but “The Lighthouse” far transcends those movies and is most definitely my pick for movie of the year.