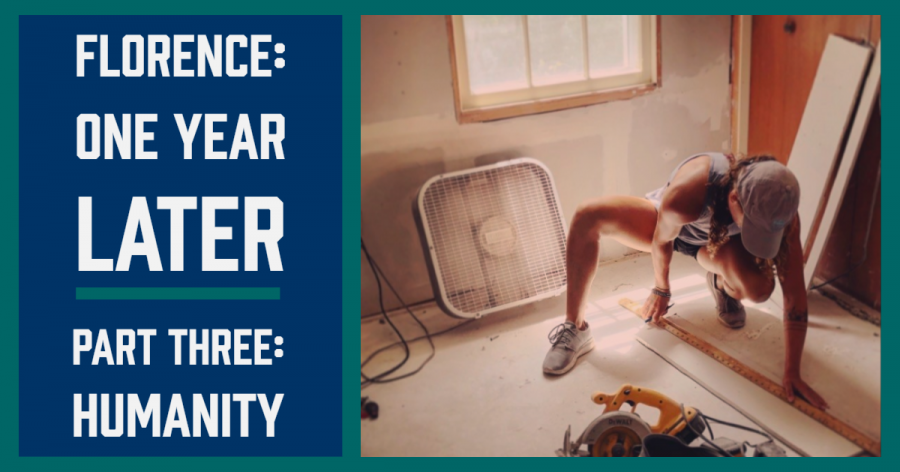 This article is part of a series about Hurricane Florence which hit Wilmington in 2018. This series will look back at how Florence impacted our community and look forward to see how it continues to affect us today.

Brenna Flanagan, Lifestyles editor of the Seahawk, was a freshman when Florence made landfall. “The storm affected everyone’s classes, and we had to work extra hard to make up time and work,” she said.
“This was especially tough for me because I was a first-year freshman. I had just gotten adjusted to college life, just got started in my classes, just started making friends, just started getting involved, when this happened. When I got back, I had to mainly focus on my classes, along with everyone, and that stunted my time as a student. My first semester of college got off to a rough start and because of it, I thought about switching schools or second-guessed college in the first place because the amount of work and lack of involvement started to affect my mental health,” Flanagan continued.

This disruption was not only stressful for students, but their professors as well. “I had to compress all my classes,” Kimberly Hemingway, a professor from the English department at UNCW, was one of the many faculty members whose classes were adversely affected by the storm. “We’re going to do the best we can to make up what we have lost, but we all recognize that it’s probably not really possible, you know, so you had to be inventive as a professor.”

Unfortunately, many professors had to make huge sacrifices in order to move on. “In my journalism class… I would normally have like four articles over the course of the semester, instead we wrote two,” Hemingway said. In a sense, teachers were stripped of nearly half of their class time and had to remove crucial assignments. The university told its professors that they had to produce alternative assignments to make up for the month that was missed, which created stress on top of the trauma that was ingrained within students and faculty alike.

As a result of the uncertainty of the damage, the faculty underwent many of the same communication issues that students went through. “I think the communication wasn’t great, from the university to the community at large. I think they were really eager to reopen campus before it was time, and so some of us came when the campus reopened for faculty and staff…I came here, and I was supposed to report for duty, and I was the only one in my building. There was like Police and FEMA outside of Morton, and caution tape everywhere, ‘so why am I here?’” she said.

Hurricane Florence brought enormous amounts of devastation to the Carolina coasts, with an estimated $24 billion in damages. In the eyes of the general public, that damage disappeared once the news coverage moved on to other stories. Unfortunately, even a year later, some of the wounds have yet to heal. It is easy to forget about how long the recovery process has taken.

“There’s a need still, and the problem is, the need is no longer in the paper. If you [drive] through most parts of Wilmington, there’s no real sign that Florence was even an issue eleven months ago,” Lee Prigden, project manager for the Cape Fear Volunteer Center, said in an interview with The Seahawk.

Prigden has been working specifically with the volunteer center since February 2019, but he has been doing disaster relief for much longer. Since Florence struck, Prigden has spent nearly every day visiting residences in need of help and working to make them livable.

“It doesn’t take a hurricane to create a disaster. Half of these people were living in a disaster before the storm even hit because their homes were in bad shape,” Prigden said.

Even though Florence happened over a year ago, the need has not left in the slightest. The main difference between now and then is that the media is no longer paying attention to the damage that is still there. In truth, the recovery process could end up taking years. When Florence was at the center of public attention, there were thousands of people coming to the Wilmington area to help with clean up, but now the issue seems to be too much work and not enough help.

“…Our hardest thing to deal with is not having volunteers. During the summer time, it was easy because we had kids coming from all over the country. We had so many that it was hard sometimes to find work to send them to. …We started this [project] with a group of 120 volunteers. Now, I’m down to working with two or three at a time during the day.”

Though storm has passed, there is still work left to be done. For more information about how current community relief efforts and how to get involved, please visit capefearvolunteercenter.org.