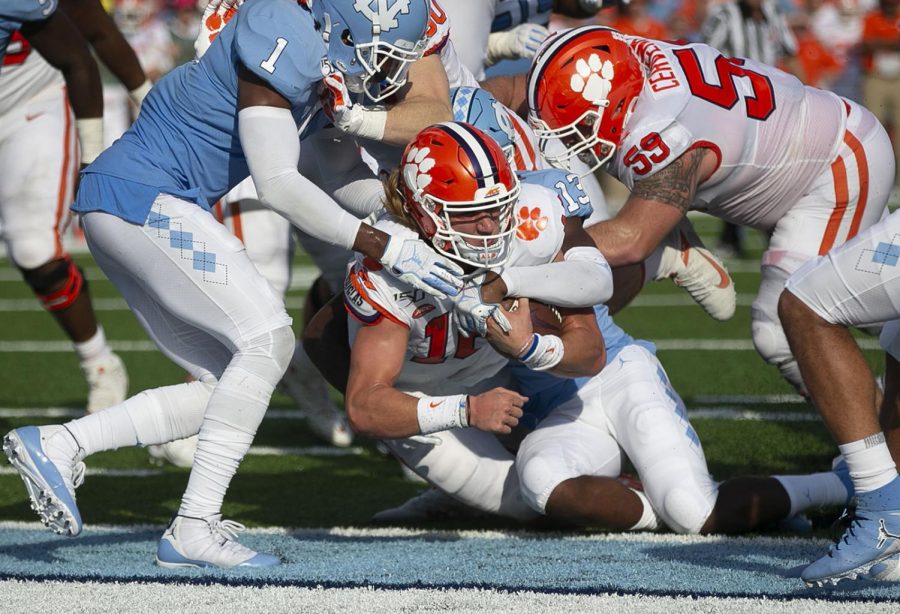 Clemson quarterback Trevor Lawrence (16) scores a touchdown on a three-yard run to tie North Carolina 14-14 in the second quarter on Saturday, September 28, 2019 at Kenan Stadium in Chapel Hill, N.C.

We near the halfway point of the 2019 college football season, and as expected, nothing is certain.

Clemson nearly took the loss of the year, Maryland has lost all momentum, the Pac-12 is a free-for-all, we still do not know what to expect from Michigan and Ohio State may be on the cusp of its best season in years.

Recapping week 5 here are a list of upsets, blowouts, notable games and, of course, the Powers Poll Top 25.

By definition, this does not fit under the umbrella of “upset,” but it was as close to one as you could get. The Tigers nearly met the end of their 19-game winning streak last Saturday, escaping Chapel Hill with a 21-20 win.

Mack Brown met high levels of criticism on his decision to go for a two-point conversion instead of kicking the PAT when the Tar Heels scored with less than a minute and half to play.

While the UNC offense was able to maintain a balance with Trevor Lawrence and the revered Tigers, the Tar Heel defense was the point of emphasis.

The UNC defensive unit held Clemson to 21 points — their fewest since New Year’s Day 2018 in a 24-6 loss to Alabama in the Allstate Sugar Bowl.

While the Tar Heels did not  pull off the win, the nail-biter was enough to knock Clemson out of the AP poll’s no. 1 spot.

As it has been since week one, the Pac-12 is a free-for-all. A free-for-all in the sense that nobody knows what is going to happen.

So, while ASU’s 24-17 win over no. 15 California was no shocker, it was definitely par for the course by Pac-12 standards.

Eno Benjamin rushed for 100 yards and three touchdowns on 29 carries, while Jayden Daniels passed for 174 yards and rushed for 84 yards on 12 carries.

My goodness, what happened to Maryland?

Penn State has established itself as a football powerhouse, but the Terps’ started the season dropping 79 points on Howard and 63 points on no. 21 Syracuse. Since then, however, they have lost that season-opening spark, only putting 17 on Temple and getting shutout 59-0 last Friday against the Nittany Lions.

The odds were very much in favor of PSU, but I do not think anyone expected the Terrapins to put a goose egg on the board. At this point, the only thing those first two wins for Maryland accomplished was making Howard and Syracuse look awful.

It cannot go without mentioning, however, that injuries have played a huge role in the Terps’ misfortune as of late. Three key players in right tackle Marcus Minor, cornerback Marcus Lewis and backup running back Lorenzo Harrison are benched due to ailments ranging from a dislocated toe to a torn MCL and ACL.

Ohio State is of another breed this season.

The Buckeyes have not scored less than 42 points all season, including two games over 50 points and one game over 75 points. They opened up Big Ten play this weekend with a 48-7 win over Nebraska to take them to 5-0 on the season.

After Urban Meyer’s retirement, it became a question of whether or not OSU’s legacy of football would continue, but head coach Ryan Day has found a good fit in Columbus.

OSU had 580 yards on the day, including a 368-yard performance on the ground. The Buckeyes also only had two penalties.

For other scores from week 5 of college football, click here