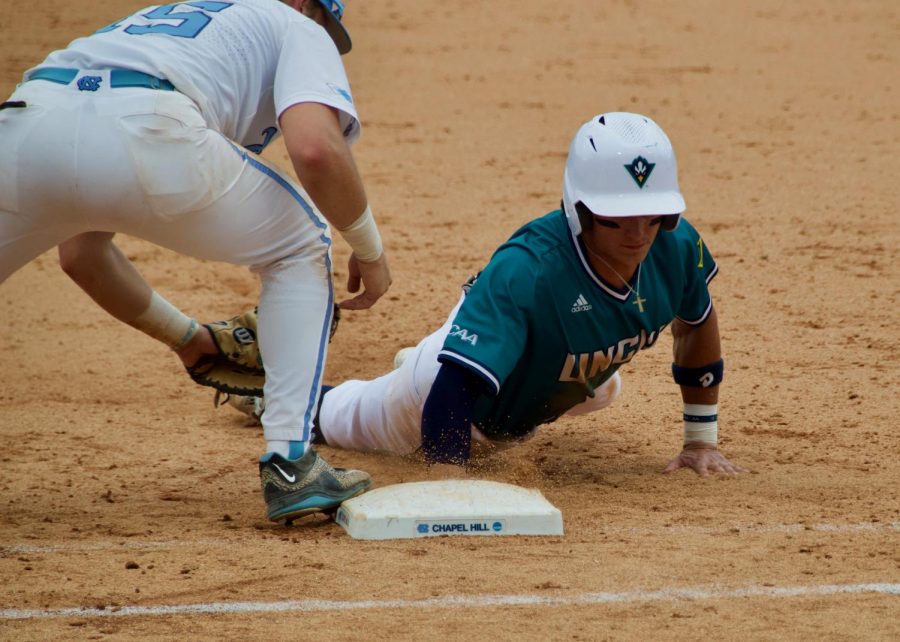 CHAPEL HILL, N.C.—A 2 RBI double from freshman Matt Suggs gave UNC Wilmington its first lead of the game and got the ball rolling for the Seahawks.

However, the Diamond Hawks would go on to take a 7-6 loss to North Carolina in game one of the 2019 NCAA Chapel Hill Regional after a throwing error from third base allowed infielder Danny Serretti to slide home for the walkoff win.

This frustrating finish for the Seahawk club had shades of UNCW’s first meeting with UNC back in February. In the bottom of the ninth, a homer courtesy of Dylan Enwiller gave the Tar Heels a 4-3 win after a neck and neck clash between the two squads.

Noah Bridges was the key to UNCW’s efforts on the day. The sophomore outfielder had two RBIs and three hits which included a homerun. Bridges’ show out performance brings his season totals to 60 hits, 45 RBIs and four homers.

In the bottom of the ninth, and just as UNC had tied the game at six-all, a string of storms, which affected games being played throughout the state, set its sight on Chapel Hill.

Fans were asked to evacuate the stadium as the field crew spread the tarp across the infield. With dark clouds sprawled across sky, it became a question of whether or not the game would be continued tonight or be delayed until Saturday.

Over three hours later, the clouds began to part, and the game was continued. With the bases loaded and one out, Serretti was caught between third and home plate. As the Tar Heel freshman barreled toward home, third baseman Cole Weiss overthrew catcher Zachary Bridges, allowing Serretti in for the game-winning run.

This has been a season of broken records for the Seahawks, several of which were broken or further extended in this afternoon’s contest.

Sophomore Greg Jones, who had 69 runs coming into today’s game, became just the fifth player in program history to surpass 70 or more runs in a single season. Jones also extended his sophomore records for walks and stolen bases in a single season, boasting one of each.

Redshirt senior Blake Morgan became the 12th pitcher in program history to appear in 30 or more games in a single season. Morgan also aided in extending the school record for strikeouts from 543 to 550, contributing three during his time on the mound.

As a team, the Seahawks were tied for fourth in walks in a single season. That number was extended from 267 to 270. The ‘Hawks also added three stolen bases to their season efforts, which broke the number of 105 put up in 2012.

Similar to last season, the Diamond Hawks will battle their way through the elimination bracket. They will take on the loser of Tennessee vs. Liberty at noon on Saturday.