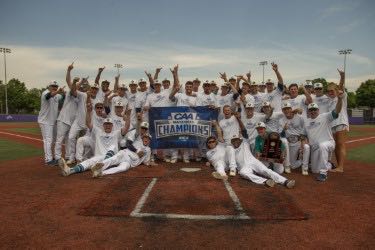 The odds were stacked against the Diamond Hawks since the 2018 Major League Baseball draft.

Six key assets to the Seahawks’ repertoire were selected at the next level. Of those six players were pitcher Austin Easter, who held opponents to a .201 batting average and managed 48 strikeouts in 44.1 innings pitched, and Mason Berne who was a first-team All-CAA honoree and led the team with a .343 batting average over 82 hits.

With such a huge loss of talent, many thought 2019 would be a rebuilding year, but for Mark Scalf and his Seahawks, the turnout of this weekend’s Colonial Athletic Association tournament could not have held a more storybook ending.

A team that nearly missed the CAA tournament for the first time in over three decades, braved the storm and came out on top to win its second conference tournament championship in a row.

Rewind to Saturday, May 18. UNC Wilmington, which sat at 27-28 heading into its Senior Day matchup with James Madison, could see itself on the brink of exclusion from the CAA tournament for the first time in 34 seasons.

It was a Chris Thorburn RBI single which brought Brooks Baldwin in for the first score of the day in the bottom of the second. The ‘Hawks put three more runs on the board between the second and third innings, combined with a stout defensive stand which held JMU scoreless, to give the Seahawks a 4-0 victory and a bid into the conference tournament.

William & Mary was able to get on the board early, bringing a run across in the second. It was a sixth and seventh inning show out from the Seahawk club that would send the Tribe packing.

A homer from Weiss in the sixth got the ball rolling for Noah Bridges to hit an RBI homer bringing himself and Kep Brown in for scores.

In the seventh, Jones ripped a double down the right field line bringing Thorburn across homeplate. Later that inning, a balk would bring Jones home from third to put the ‘Hawks up 5-1.

After defeating the Phoenix on Thursday, the Seahawks suffered their first loss of the tournament to them on Saturday night.

The ‘Hawks only managed one score, which came at the hands of Weiss on an RBI double bringing Jackson Meadows in for the run.

Extra innings seemed to be a theme for UNCW in this year’s tournament. The Seahawks started off the tournament in an 11-inning thriller and closed with a 10-inning title game.

After UNCW took a 4-0 lead through five and a half, Elon crept back into action mounting three runs in the bottom of the sixth.

In the top of the ninth, Weiss sent an RBI double down the left field line bringing Jones in for the score and giving the ‘Hawks a 5-3 lead. The Phoenix answered, scoring two runs of their own in the bottom of the ninth to send it into extras.

Noah Liles was the difference maker, putting an RBI double down the right field line and bringing Thorburn home. Elon could not answer in the bottom of the tenth, giving UNCW its second CAA tournament title in a row and its sixth all-time.

The Seahawks are headed to the Chapel Hill Regional as the 4-seed, along with host 1-seed North Carolina, 2-seed Tennessee and 3-seed Liberty.

The Diamond Hawks are 0-2 against the Tar Heels this season. They lost their February meeting in Chapel Hill 4-3 in the bottom of the ninth and suffered an 11-4 trouncing at Brooks Field in March.