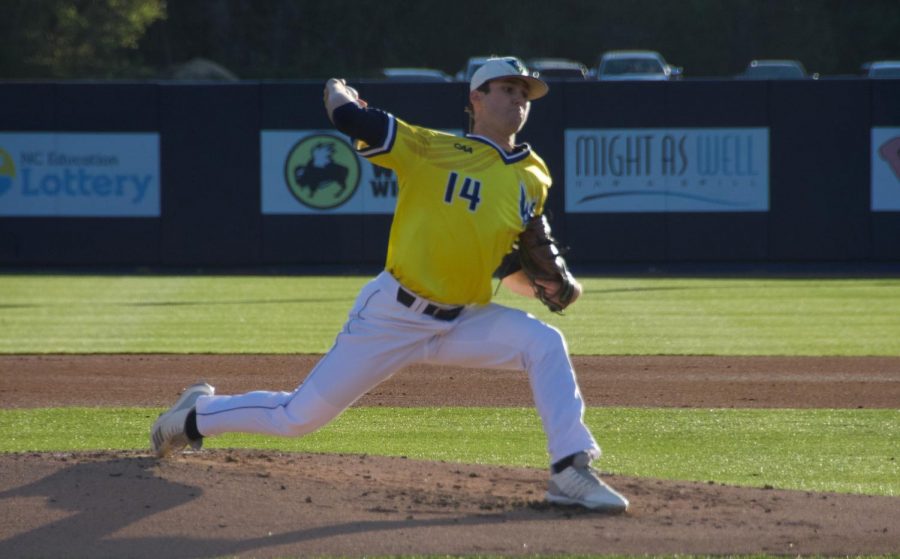 Landen Roupp (14) during UNCW's matchup against Coastal Carolina at Brooks Field on March 26, 2019.

After a season-saving 4-0 win over James Madison last Saturday, which earned UNC Wilmington a spot in the 2019 Colonial Athletic Association tournament, the Seahawks have made the most of their golden ticket to Harrisonburg.

So far this week, UNCW has played 20 innings in two games, including an 11-inning thriller against Northeastern on Wednesday to open the tournament. In those two games, the Seahawks have outscored their opponents 16-9 — not a bad performance as we near the end of long-time head coach Mark Scalf’s retirement tour.

While there is plenty of baseball left to be played, here’s a recap of UNCW’s CAA tournament outing thus far:

CAA Player of the Year Greg Jones was a key component in UNCW’s 8-6 win over Northeastern in 11-innings.

The sophomore crossed home three times against the Huskies (27-28), including the tie-breaking run in the 11th.

The biggest game-changer however was junior Cole Weiss. The first-team All-CAA honoree contributed two hits, two runs and two RBIs. He drove in the first score of the game with an RBI single as well as the tie-breaking score in the top of the 11th.

Also coming in big for the ‘Hawks were redshirt-junior Kep Brown and sophomore Doug Angeli.

The duo went for three hits apiece and a combined five RBIs which were crucial to the Seahawks’ effort. Angeli’s final RBI, which brought Weiss in for the score, was the nail in the coffin for Northeastern, giving UNCW the 8-6 lead and eventual win.

Elon, which wrapped up the regular season nearly two weeks ago against UNCW (30-28) and had not played a game since, appeared a bit rusty throughout much of the contest.

Sophomore Landen Roupp had a day on the mound. The Rocky Mount native pitched over seven innings, striking out 11 Phoenix batters.

Jones also had a stout showing, contributing three RBIs and a score of his own. His three RBIs all came on a bases-loaded triple which brought Noah Liles, Chris Thorburn and Brooks Baldwin home to put the ‘Hawks up 7-0.

It wasn’t until the bottom of the eighth that Elon would begin to gain momentum.

An RBI double from Matt Oldham, which brought Anthony Galason in for the score, followed up with an RBI homer from Joe Satterfield, which brought Oldham in for a pair of runs, cut the deficit to just five.

This effort was for naught as the Seahawks were able to hold off Elon late, walking away with the 8-3 win.

UNCW: The final game of today’s three-game slate between #2 College of Charleston and #3 William & Mary will determine the Seahawks’ next opponent. That game is set to close out the day on Friday with a first pitch time of 7 p.m.

Elon: The road for the Phoenix is a bit more complicated. Elon awaits the winner of Friday’s opener, which could be #2 College of Charleston, #3 William & Mary or #4 Northeastern. Elon’s next contest is set for Friday with a 3 p.m. first pitch.