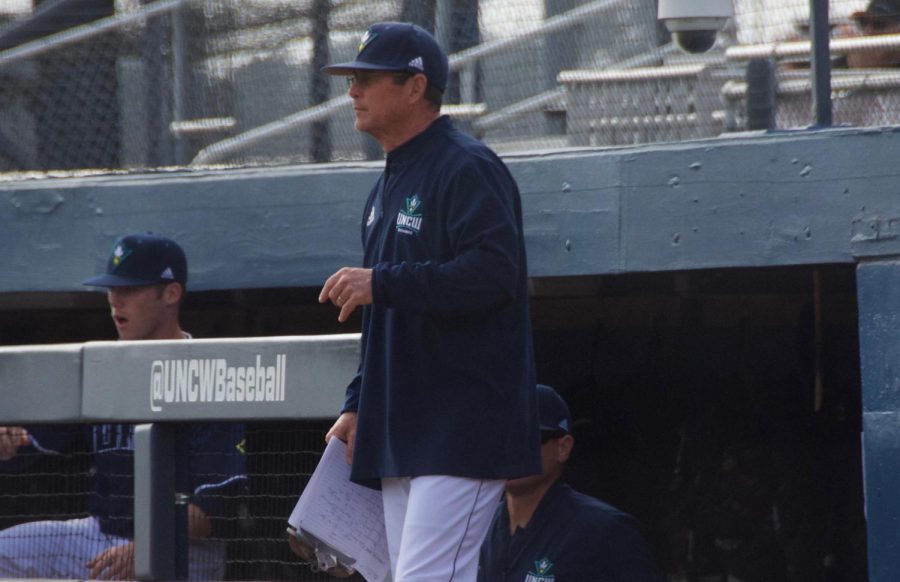 UNCW coach Mark Scalf during the Seahawks' matchup against Valparaiso at Brooks Field on March 3, 2019.

Following its 4-0 victory over James Madison on Saturday, UNC Wilmington baseball prepares for its 34th consecutive Colonial Athletic Association tournament appearance — the most of any CAA team.

Junior pitcher Zarion Sharpe, who earned the win on the mound, allowed only three hits and two walks while striking out eight Duke hitters in 5.1 innings.

Following his final home game as long-time head coach, Mark Scalf was honored by the Seahawk-faithful with a retirement ceremony.

The Seahawks improved to an even 28-28 (12-12 CAA) on the season, and will travel to Harrisonburg, Va. as the tournament’s fifth-seed. UNCW, which entered the 2018 tournament as the fourth-seed, will see an uphill climb from day one similar to last year.

The ‘Hawks will square off with fourth-seed Northeastern — which UNCW defeated to win last year’s tournament — to open play on Wednesday. The Seahawks went 2-1 against the Huskies in the regular season.

Pairings for the 2019 CAA Tournament