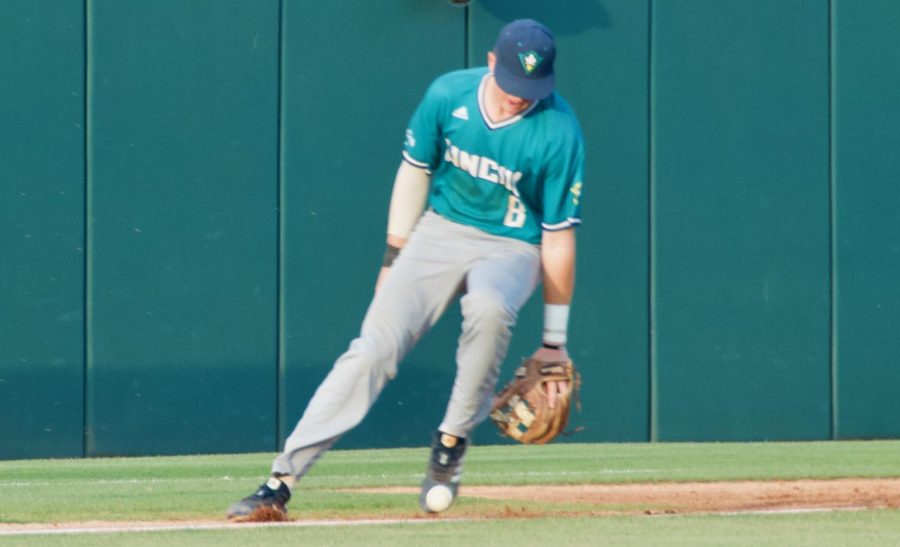 Cole Weiss (8) lets bunt roll past him against NC State at Doak Field on April 30, 2019. The ball stayed fair long enough to hit the third base bag.

RALEIGH, N.C.– UNC Wilmington third baseman let the bunt attempt roll foul during the third inning. The only problem was the ball stayed to the right of the third base line until it hit the bag in fair territory.

It was the perfect example of the lack of luck the Seahawks (23-24) received against no. 2o North Carolina State in its 11-3 loss at Doak Field on Tuesday night.

The Seahawks allowed the Wolfpack (34-12) to score in five straight innings including a five-run third. Junior pitcher Blake Deatherage allowed five runs on three home runs in 0.2 innings of relief.

With April officially over, the Seahawks now turn to May and what could be the final stretch of coach Mark Scalf’s coaching career. Like other programs this year, NC State and coach Elliott Avent honored the longtime Seahawk skipper prior to the game.

There are nine games remaining in the Seahawk’s schedule before the CAA tournament in Harrisonburg, Va. on May 22-25. Six of those games are at Brooks Field beginning this weekend against Delaware. The only way this Seahawk team can send Scalf to one more NCAA Regional is by virtue of winning its second straight CAA championship.