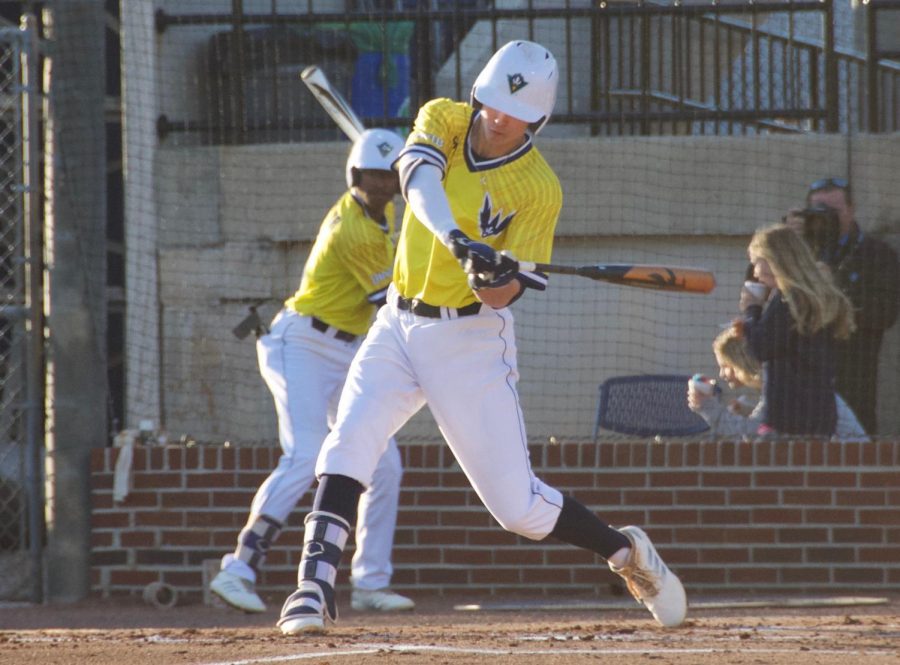 Brooks Baldwin (10) during UNCW's matchup against Coastal Carolina at Brooks Field on March 26, 2019.

UNC Wilmington managed to snap its six-game losing streak with a 3-1 victory over Campbell on Wednesday night at Brooks Field.

Things started off well for the Seahawks as they managed an early run in the second inning. Freshman Brooks Baldwin hit a single into left field to score Cole Weiss to put UNCW (21-22) ahead 1-0. UNCW would pad onto their lead in the fifth inning thanks to a Weiss RBI single to score Jackson Meadows to make it 2-0, Seahawks.

In the seventh inning, the Fighting Camels (25-15) managed to get runners on first and third with one out following a walk and hit by pitch. Campbell’s Cameron Witt hit a ground ball up the middle that looked like it was about to make it into center field. Fortunately for UNCW, they had Greg Jones at shortstop.

Jones made a diving play to his right and flipped the ball to second baseman Jackson Meadows to start the front end of the 6-4-3 double play to get the Seahawks out of the jam and keep their 2-0 lead.

“I knew if that ball gets through that it is a run,” said Jones. “I was laying everything on the line to make a play and flip the ball to Jackson (Meadows) to turn two.”

Following this play, Riley Zayicek led off the bottom of the seventh inning with a pinch-hit solo home run over the center field wall to give UNCW a 3-0 lead.

Six Seahawk pitchers took the mound and gave up just five hits and one unearned run. Nick Bruno was the most effective pitcher for the Seahawks according to head coach Mark Scalf, who went two innings, striking out three Campbell batters.

This win gives the Seahawks the added momentum they need as they head to Charleston this weekend to play College of Charleston in a big three-game series.

“We weren’t playing together as a team, so playing good last night and playing good tonight was all we needed heading into this weekend,” said Jones.

“I thought tonight was certainly the night we need to regain some confidence and go out and compete for nine innings,” said Scalf.

Stat of the Day: This was the Seahawks first win since April 13 against Northeastern. Zarion Sharpe also picked up his first collegiate save.