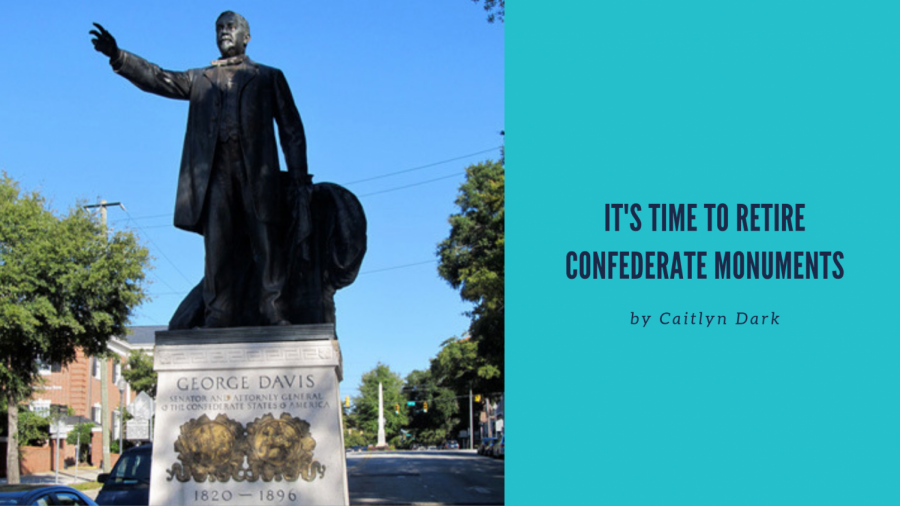 The George Davis Monument in Wilmington, NC, a tribute to the fourth Attorney General of the Confederate States

Standing proudly over the intersection of Market and 3rd is a bronze statue of George Davis, former senator and the fourth — and final — attorney general of the Confederate States of America.

Unveiled in 1911 by the Daughters of the Confederacy, the statue honoring the Wilmington native was but one statue raised in the wave of hundreds across the country — and especially the former Confederate South — popping up in sync with the new Jim Crow laws that legalized racial segregation and discrimination at the turn of the 20th century. While the 1896 case of Plessy v. Ferguson said “separate but equal,” the appearance of these statues made it clear that things were anything but equal.

Much like UNC Chapel Hill’s Confederate Monument, also known as “Silent Sam,” which was placed on campus in 1913 and torn down during protests in late 2018, George Davis’ statue was not really meant to honor the Confederate dead. Rather, these statues were meant as a public way for the post-war South to continue exerting power over the black population and reinforce white supremacy.

By reasserting these symbols of the pro-slavery fight, especially in predominantly black neighborhoods and towns being ruled by Jim Crow laws, the ruling white majority could continue to assert power over black people long after slavery was no longer the law of the land. The statues served the purpose of reminding the black communities just where the ruling whites stood: they were but the next generation of the confederacy and they would return to the dehumanizing system of slavery in a heartbeat.

In fact, these statues cannot count as true public art to begin with; these statues were shoddily made en masse in Northern workshops and were hastily installed in their Southern locations. That’s why there are so many of them, and why any time protesters manage to pull one of them down, they go without much of a fight. Silent Sam bowed after a couple protesters looped ropes around him and tugged, his visage crumpling as it hit the ground. In contrast, protesters pulling down statues in other situations are often only successful if there’s a huge crowd helping to topple the statue or they have use of heavy equipment.

Now, I’m not saying we should just throw them all away — as someone who has worked an internship at the Bellamy Mansion Museum, I know the importance of conserving history, even the darker and more unsavory parts. But what we should do is stop keeping them in the public eye as if we still approve of them and allow them to further the agendas of people who died long before we got to have a say in this conversation.

Other countries have provided us with options for dealing with a sordid history. For example, Germany has a complete ban on the display of swastikas and other Nazi paraphernalia in public other than museums. Or how about Hungary, who created a museum sculpture park dedicated as a new and less controversial home for the statues they erected while under communist rule?

We don’t have to hide from or be haunted by our history, but we shouldn’t let it dominate our path moving forward. Like Germany and Hungary and countless other countries, we have the ability to recognize what we have done, learn from our past, and work together to build a better future.

It’s past time these statues to find their forever home in a museum, not on Main Street.