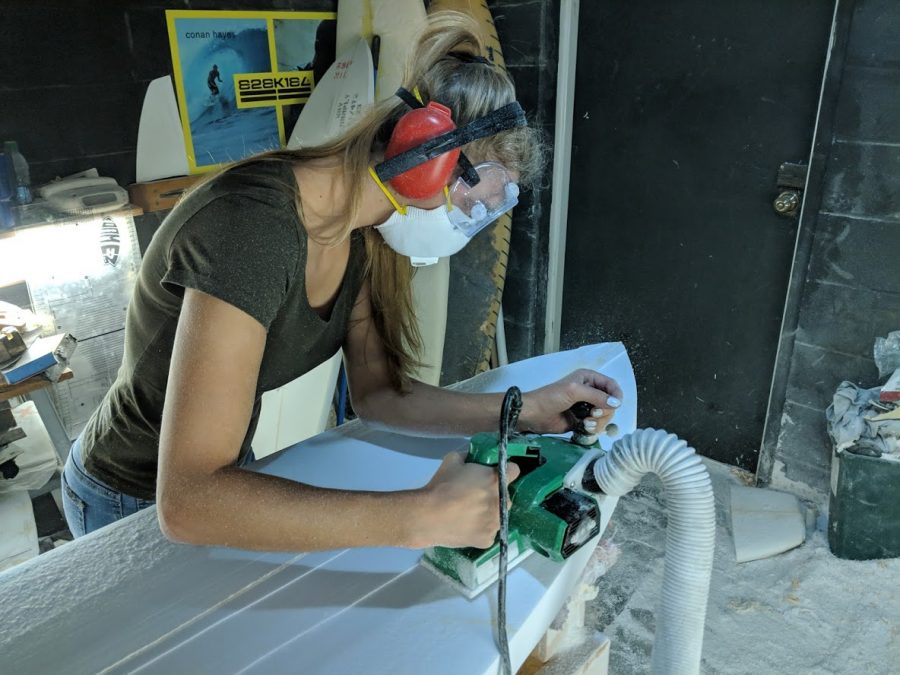 Walking into Hot Wax Surf Shop in Wilmington, on one of several TV screens, you’ll see a video of a man zipping around a workbench at high speed as a white foam plank evolves into a gracefully curved surfboard. The jittery action plays like an early film from the silent era. The man is Michael Paul, owner of the shop, and the time-lapse film condenses two hours of shaping a custom surfboard into a 15-minute video loop.

Surfers have a special bond with their boards, and surfers everywhere often dream of designing their own. But few know where or how to begin. So Michael Paul has taken it into his hands to make their dreams a reality.

Tucked into the back of the store beyond the retail floor is Paul’s workshop. Through a window, visitors can witness Paul shaping boards by hand. He stands surrounded by power tools, goggles, long rulers, foam blanks, and fine, white foam dust covering the floor like drifts of snow. On the wall above the door hang variously styled “stringers,” the thin strips of wood that define the profile of a board. Here Paul makes it possible for local surfers to gain legitimate experience and knowledge in shaping surfboards through his new Hot Wax Surfboard Shaping School.

Paul’s school is a rarity, not only in Wilmington but also up and down the East Coast. An abundance of surfing schools exist, where you can learn to surf. And the Wrightsville Beach area is home to renowned surfboard designers like Ian Balding, Savage Surfboards, Allison Surfboards and Jimmy Keith. But few shapers exist who will teach others their art. You don’t meet people like Paul just anywhere. He is a humble, old school surfer and shaper whose goal is to give back to the surf community that has supported his life-long love of surfing, to share his skills and experience.

A life-long surfer, Michael Paul graduated from UNC Wilmington in 1979. Before collecting his diploma, he headed straight for Hawaii to find a mentor who could teach him the art of shaping.

“He was on the North Shore, the surfing mecca,” Paul said. “I graduated and left the day after Christmas. Drove my little Pinto station wagon to California and shipped it over. I was just going stay a couple of months. I stayed two years.”

Paul is now one of a small handful of people in the Wilmington area qualified to train others in board shaping. He has been shaping boards for 37 years and recently decided to share his surfboard-shaping knowledge with the public.

“There’s a small number of people in the world who can do this,” he said.

Paul opened Hot Wax Surf Shop at its original location in 1986 with a fiery passion for surfing. Building his business had been a slow uphill rise. He has relocated four times within a mile of his current location. His current location is directly across from the UNCW campus on Hoggard Drive. With help from his son Shaun in running the business, Paul decided to reinvent himself and diversify his business by putting his rare talent to work. Noting the lack of shaping schools, he decided to take on the task of becoming a mentor himself. But it took him decades to feel accomplished enough to pass on the art to others.

His influences are among the legends of surfboard shaping.

“The people I’ve studied, the two biggest in the world, would be Dick Brewer and Rusty Preisendorfer,” he said.

As a surfboard retailer, Paul was able to buy surfboards by the dozen, then study the best of them. Of the 12 boards he keeps along a wall at home, the only one he didn’t shape is a Dick Brewer board.

As his skills improved and the manufacture of surfboard blanks evolved, he now produces a lot less waste than he did previously, as the factories now cut the blanks in half and curve them so they have a curve in them already. The blanks also come with stringers already installed which Paul then uses as a jumping off point for forming the proper rocker. He once made wooden templates to produce boards in greater numbers but turned away from mass production years ago. Today he shapes every board individually, by hand.

Students get to shape the boards with their own hands with Paul right beside them, walking them through the process. Paul himself can shape a board in two and a half hours. For students, it can take 12 hours to shape a longboard, six for a shortboard. During the shaping process, Paul works out the measurements, explaining each step of the process and the tools used while attempting to maximize the student’s surfboard-shaping knowledge.

“We’re giving everybody the opportunity to shape the board 100 percent with their hands,” he said.

Throughout his career as a surfer, retailer and shaper, Paul’s spiritual foundation has been fundamental.

“Surfboard shapers were thought of as gurus,” he said. “I was more humble.”

He’s been ever-grateful for the local support he has enjoyed over the decades, and it shows in how he signs his boards. There

was a time when he wasn’t signing his name. Rather, he inscribed boards with “Glory to God,” followed by his initials.

“I’ve prayed since day one. Definitely, God’s been on top of everything.”

The Hot Wax Surfboard Shaping School is Paul’s opportunity to turn his life’s dream into the dream boards of surfers in search of a mentor.