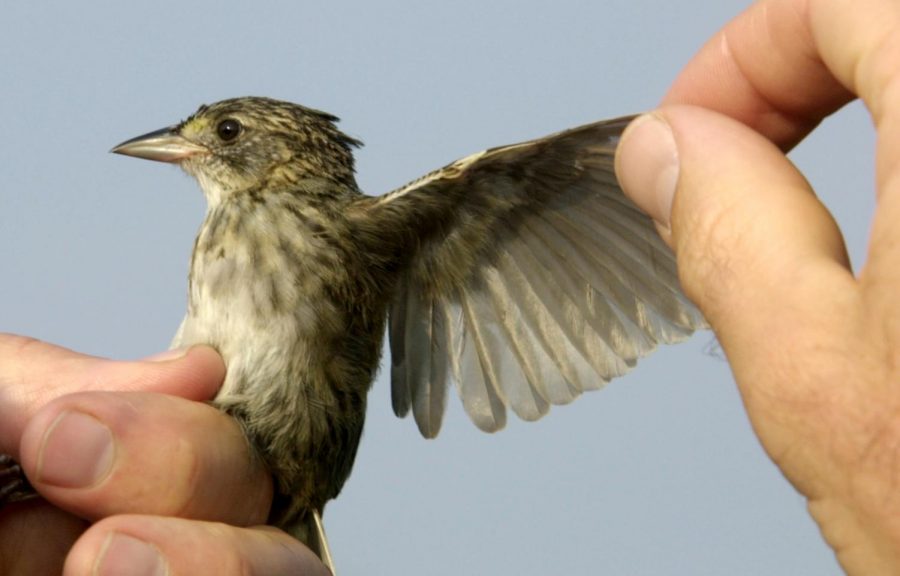 Professor Chris Hill, an ornithologist at Coastal Carolina University, inspects a seaside sparrow during a field study on a salt marsh on Waites Island.

The North Carolina Wildlife Resources Commission (NCWRC) awarded Raymond Danner, an ornithologist and assistant professor in the Department of Biology and Marine Biology at UNC Wilmington, a $234,479 grant for research on coastal sparrows.

The two-year study will help aid NCWRC in conserving the two species and their habitats.

“The students are trying to figure out where they sleep at night — where they roost,” Danner said.

Graduate students were camping on Masonboro Island in early March as part of research on two different species of sparrows: the seaside and the saltmarsh. Both are physically small and brown in coloration. They live in marshes, specifically tidal marshes.

“These two that we are studying now are of interest because they have shown some decline,” Danner said.

Danner has studied marsh sparrows for a number of years. Danner wrote a research proposal after the NCWRC expressed interest in conserving these species. NCWRC reviewed the proposal and concluded that the research deserved funding.

“Which marshes should they be sure to conserve? Are there subtle habitat differences between marshes that they should be considering? Is this marsh a couple of centimeters higher and therefore more important than this other marsh over here? That’s the type of information that they are going to get out of this research project,” Danner said.

Danner has a team of dedicated graduate and undergraduate students helping him with this research. The students are following these birds with radio transmitters.

“We attach them directly to their backs using a special type of skin bonding cement,” said Danner. “A type of glue that will peel off about a month later.”

The students are following these sparrows with radio transmitters. These will lead them to where they sleep, which is a vital area that needs to be conserved.

The radio transmitters beep when a sparrow is located. It gets louder the closer you get.

They place nets in the marsh in order to catch these birds. Two people hold a rope — each on one side — and walk through the marsh. This causes the birds to fly up from the grass and into the net.

“These nets are called mist nets because they look like a fine mist and the birds often don’t see them,” Danner said.

They then take the birds out of the net and gather the research needed at a “banding station.”

They repeat this process several times throughout the winter.

“One reason that I am really excited about this project is that it is close to campus and I can get students involved,” Danner said. “Grads, undergrads, primary and volunteer students – all are involved in this project.”

Graduate students Evan Buckland and Marae Lindquist, as well as undergraduate Juan Zuluaga, are primarily working on this project.

Danner hopes that further research will continue after the two-year period is over.