McGrath: "It couldn't have been a more fitting end to Devontae's career in Trask." 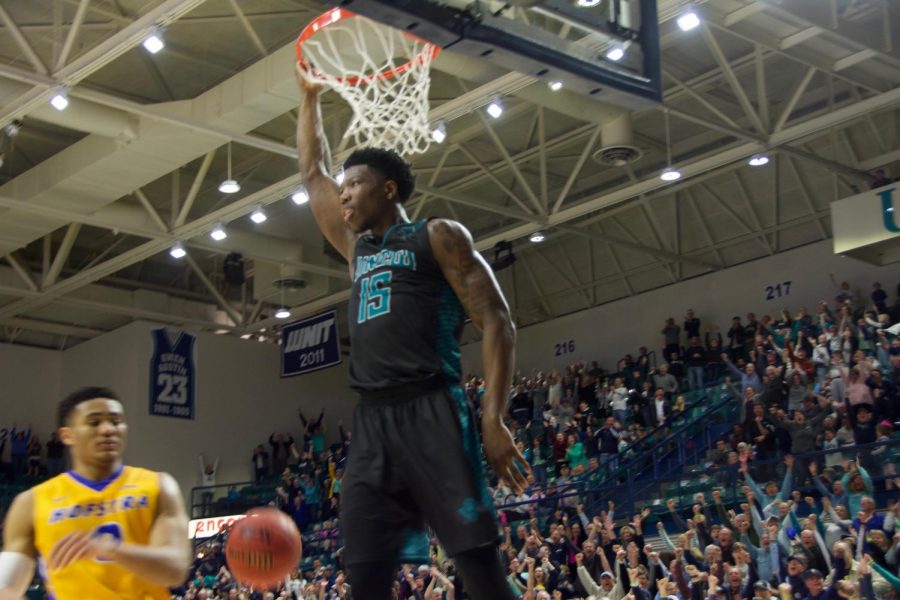 Devontae Cacok sealed it with a dunk.

The 6-foot-7 senior forward playing in his last game in Trask Coliseum was alone on the court when he took a fast break pass from Ty Gadsden then slammed it home to give UNC Wilmington men’s basketball its 87-79 win against Hofstra on Saturday night.

“This was one of the greatest finished I could ever imagine,” said Cacok. “I got chills. Knowing that sealed the deal for real was a great feeling.”

After UNCW blew an 11-point halftime lead to a Northeastern team with only eight healthy plays on Thursday, there was little reason to believe its fortunes would change against the Colonial Athletic Association leader.

Then the senior class plus freshman Kai Toews found a groove that didn’t change once the true starters checked in after about four minutes. The Seahawks were more attentive on defense as the Pride missed seven of their first eight three-pointers.

The Seahawks also led at the half of the two team’s meeting earlier this year before the Pride stormed back to win by double-digits. There have been stretches of brilliance this season, just not complete games.

“We made the plays we had to make to win that game. We didn’t give in when they went on scoring spurts like at other times this year,” said coach C.B. McGrath. “We kept on fighting back. It’s great to see.”

Their confidence didn’t waver when the Pride started hitting shots or when the Seahawks committed eight second-half turnovers. They fought throw scoring droughts and made their free throws. It wasn’t perfect, but the Seahawks believed they could win and they did.

On a night when Cacok moved into the fifth on the all-time UNCW scoring list and secured his NCAA-leading 20th double-double (18 points, 16 rebounds) he still managed to do something he never had done before.

With the shot clock winding down and alone at the top of the key, Cacok took and hit his first career three-pointer. He now has tied or holds the UNCW record for three-point percentage (minimum one attempt).

After his game-sealing dunk, he did a lap around the arena thanking fans and lingered as kids and families alike all stood at half court to get a picture or hug the player who gave them much to cheer for over the past four years.

“Four years of hard work, championships ups and downs that we’ve been through,” Cacok said. “A lot of those people stuck through. Just to see them stick around and be supportive…I’m proud to have fans like that.”

Confident as a Carolina Cougar

Saturday night will be a time of celebration and reflection, but the Seahawks will soon shift their attention to the final away games of the season before the CAA tournament in three weeks.

After so many blown leads this season, the Hofstra win proved what many onlookers had known all along: The Seahawks are more talented than their record indicates. As storybook a win as it was, bad teams don’t beat good teams by accident.

“Every game has ebbs and flows. When you’re playing conference opponents there’s going to be spurts both ways,” said McGrath.

We’ll know in a few weeks whether this win sparked the Seahawks season or was a reminder of the failed potential this team showed. UNCW wasn’t clicking on all cylinders by any stretch against Hofstra, but hung tough and didn’t falter late.

That can make things interesting.