Cacok: "Everything I went through...was meant for me to be a part of." 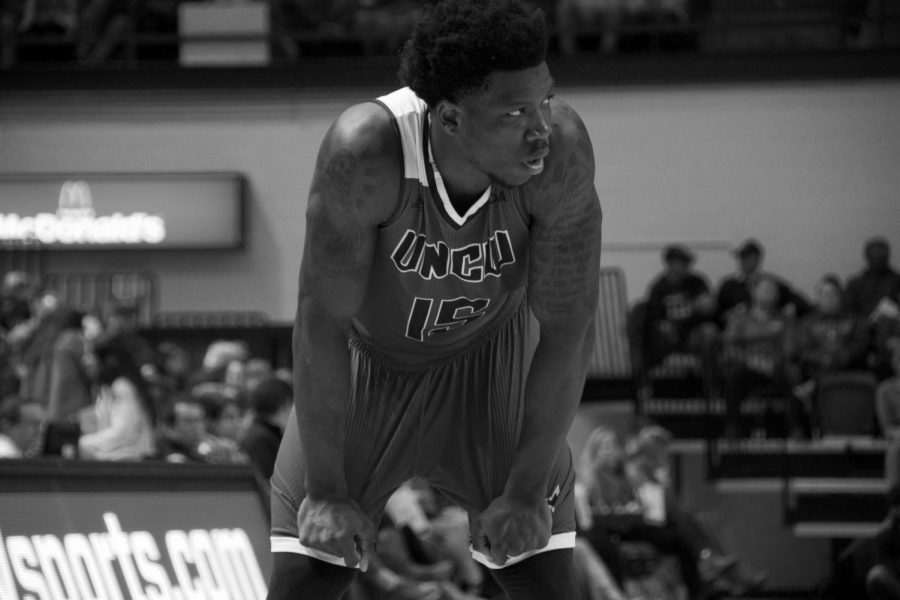 Devontae Cacok isn’t ready to think where his jersey may end up after this year.

The senior forward has gone through enough change in his UNC Wilmington career that he knows the importance of staying in the moment.

“These past four years have gone fast,” said Cacok in an interview with The Seahawk. “Really not what I’ve expected, but it’s crazy to see how quickly this time has been and how things have progressed to where they are now.”

The two-time Colonial Athletic Association champion has experienced both peaks and valleys inside Trask Coliseum. It’s what fueled him throughout his four years in teal. It’s what will take him through Thursday night’s game against Northeastern before his Senior Day against Hofstra on Saturday.

Cacok makes the program his own

After winning the second of those CAA titles after Cacok’s sophomore season, Kevin Keatts did what most mid-major coaches would do after experiencing the national attention and success the Seahawks earned.

Soon after, sophomore guard C.J. Bryce (17.4 points,4.7 rebounds per game) requested and was granted his release from UNCW. A program ready to lean on its two sophomore all-CAA players were left to watch its coach and best player in Bryce leave for redder pastures at North Carolina State.

Speculation dictated that Cacok might soon follow them. If not NC State, then somewhere else that offered a better chance to win and more exposure for his skill set. Current coach C.B. McGrath had never ran his own program after spending nearly two decades as an assistant under Hall-of-Fame coach Roy Williams.

“Staying here was the best decision for me,” said Cacok. “I looked at all my options and staying in Wilmington was the best fit for my future. Having McGrath come in, he’s a great coach. I didn’t think about what other people wanted or what they thought was best for me.”

Cacok never left and helped navigate the Seahawks through the trials of an 11-21 (8-11 CAA) record in McGrath’s first year. For Cacok’s part, he was named First-Team All-CAA, CAA All-Defensive team for the second straight year and became the fourth player in NCAA history to lead the nation in two separate categories (field goal percentage and rebounding) in back-to-back years.

Outside of a CAA tournament run in a few weeks, the Seahawks’ season (and Cacok’s career) will once again end without a postseason appearance. After two trips to the NCAA tournament in his first two years, it’s not the ending a player of Cacok’s stature deserves. However, he has no regrets on riding it out with the Seahawks.

“God put me in this plan to learn. With basketball, you’re not always going to win,” said Cacok. “No matter what happens there’s going to be the ups and the downs. This was a blessing in disguise.”

Community and the Kids

Cacok knew his relationship with Wilmington could extend beyond basketball. It’s one of the reasons he committed to the Seahawks and something he’s eager to show time after time.

He enjoys being viewed as a role model in the community. It drives him to uphold that standard when he’s in public. From going to class or speaking at an elementary school, Cacok knows people are watching, but he doesn’t mind.

“The lessons I’ve learned have helped me in that role. Knowing how to present myself to the community,” said Cacok. “It makes me feel like I’m doing something right. It’s cool to experience that.”

Cacok will graduate in May with a bachelor’s degree in communication studies. Through the COM department, he joined Seahawk Storytellers, a student troupe that travels to elementary schools in the community to act and tell stories. He had never experienced an activity like it but wanted to immerse himself more into Wilmington.

“I work pretty well with kids. I feel me going out there and putting myself out there with kids allowed me to work on my public speaking,” said Cacok on Seahawk Storytellers. “Getting in front of people, I feel that was a good class to take; it all worked out.”

McGrath knew Cacok desired to make a difference beyond the court. As the face of the program, Cacok has held the spotlight for much of the last two years. While at UNC, McGrath saw some players shy away from that spotlight due to the amount of attention it requires.

“It’s refreshing to see he does like that stuff,” said McGrath on Cacok’s willingness to shoulder the program. “He doesn’t fake it. He really wants to have an impact on people that he touches and people he comes across.”

True leadership isn’t sought in the name of praise or recognition. It was forced into Cacok’s possession after his sophomore year and has found, to no one’s surprise, that he wears it well.

When the Trask crowd cheers the starters during pregame introductions, it’s louder when Cacok is named. No one is louder than the mother a few rows behind the home bench, usually adorned in a teal jersey and waving a pom-pom.

Rose Cacok has been a staple at Seahawk games since her son committed out of Alpharetta High School in Georgia. She’s watched through the records, the wins, and the losses. They’ve been together throughout this journey and counted down to the final game at Trask.

Their bond runs deeper than basketball, even if it meant a life without basketball. She never pushed Devontae towards the sport, instead placed her son’s happiness above everything. A mother’s love has given the senior the freedom to pursue his dreams and maximize his game.

When Devontae was honored for becoming the third Seahawk ever to have both 1,000 or more points and rebounds prior to UNCW’s win against Drexel, Rose joined her son on the court with the commemorative ball the school awarded him. She’ll be there on against the Huskies on Thursday and one more time on Saturday when Devontae is honored on his Senior Day. A mother and son, together always.

“I always know she’s going to be there for me,” Devontae said. “We have this bond no one can ever break. I feel we’re going to always be together until the end.”

Whenever his college career ends, Cacok plans to pursue his professional basketball dreams. He has NBA aspirations, but his “tweener” profile makes that a longshot at best.

Cacok understands he’s not a finished product and will need to continue to expand and evolve his game to get and stay on a professional team’s radars. He’s explored all sorts of routes including the NBA’s league, two-way contracts, and international basketball.

“There’s a lot of different aspects of what I could end up doing,” said Cacok. “I have an open mind. I could end up in Spain, Italy, or the United States. They’re all opportunities that I’m ready to see what can happen.”

Wherever his career takes him, he plans on staying involved with the Seahawk program. He remembers how often former players like Brett Blizzard return to UNCW and “leave their mark” on the program far beyond their playing days. It inspires Cacok to do the same.

As for whether his no. 15 jersey will join Blizzard’s no. 11 in the Trask rafters, that’s a question people will debate until it happens. Just don’t expect Cacok to take part in the discussion.

“It’s not up to me. We’ll see,” Cacok said with a grin. “It would be an honor to have my jersey retired.”

The championships and numbers will always be there. The records will stay until someone comes along to break them. The pride and loyalty Cacok has shown for Wilmington and the Seahawks over the past four years may never be replicated again.

Come to Trask, Wilmington. This weekend, Devontae Cacok still plays there. One day, it may only be his jersey.