Suggs: “It just came to me, it was working for me tonight.” 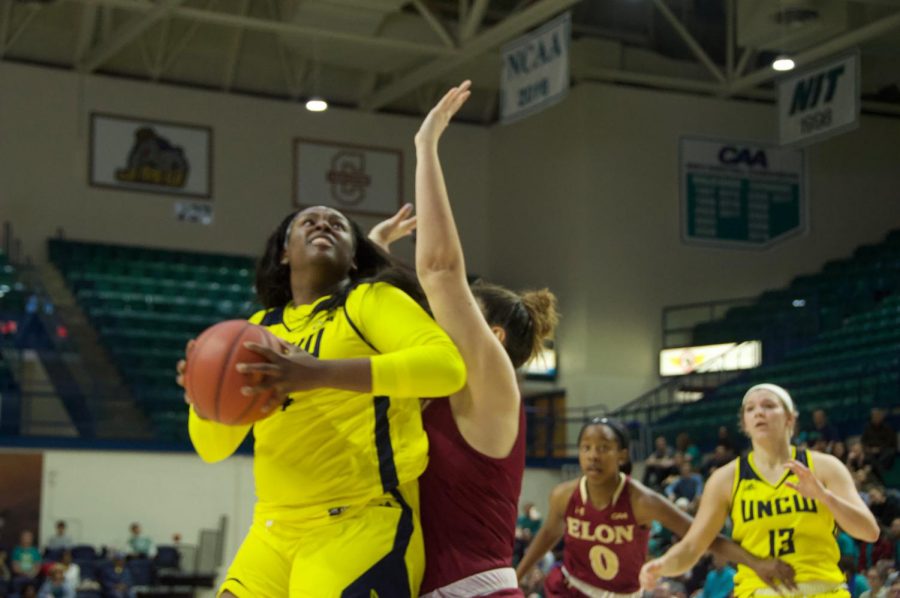 UNC Wilmington women’s basketball remained perfect at home with a 76-51 win over Elon inside Trask Coliseum on Friday night.

The Seahawks (14-7, 7-3 CAA) showcased their defensive tenacity by forcing the Phoenix into 19 turnovers to their own nine giveaways. Unlike earlier this year, the Seahawks did not need to fight back from a double-digit deficit.

“We didn’t want to start off the game like we did last time,” said Lacey Suggs.

UNCW was sparked by an energetic home crowd that came out in support of the Seahawks’ group effort that saw 14 different players log minutes.

“First of all, it was electric,” said coach Karen Barefoot. “From the start, it was just one of those games, where you know, we just felt it.”

Junior guard Lacey Suggs scored a season-high 29 points, most of which came courtesy of the standout UNCW defense.

“That’s what we’ve been working on in practice, is defense,” said the junior guard. “ When we get the defense going it flows with the offense.”

Redshirt junior GiGi Smith continued her scoring streak with a 20 point effort against the Phoenix. Smith has scored 17 points or more in six straight games for UNCW.

That UNCW limited Elon to 34.7 percent from the field was due to the low post presence of senior Chinyere Bell.

Bell was able to lock down the Phoenix leading scorer Emily Maupin (12 points per game) and played a big role in holding her to only four points and just one made field goal in the game.

Holding Maupin in check was a focal point coming into this second matchup against Elon as she dropped a season-high of her own with 26 points against the Seahawks in January. Chinyere was quick to point out some flaws from the first meeting in her post-game interview.

“Well, our first time that we played them I didn’t really play defense that well,” said Bell.

Bell finished with 13 points, two assists, two steals, and a season-high two blocks in what was arguably one of her best defensive efforts of the season.

When asked about the coming weeks during her post-game talk with media and the timing of how well her team is currently playing during this final stretch of the regular season, Barefoot seemed to already know where this group was headed this month.

“I said this, this is where we wanted to be come February, and now we’re starting to have a good rhythm with each other.” said coach.” We know how we want to play.”

The depth of this roster is continuing to prove that it is a big part of UNCW’s success now and moving forward. Coach Barefoot seemed to agree.

“I think that’s key, the fact that we showed that tonight,” said Barefoot. “Players have to step up.”

The Seahawks host William & Mary in Trask for a Sunday afternoon matchup at 2 p.m., as they look to continue their pursuit of perfection at home.