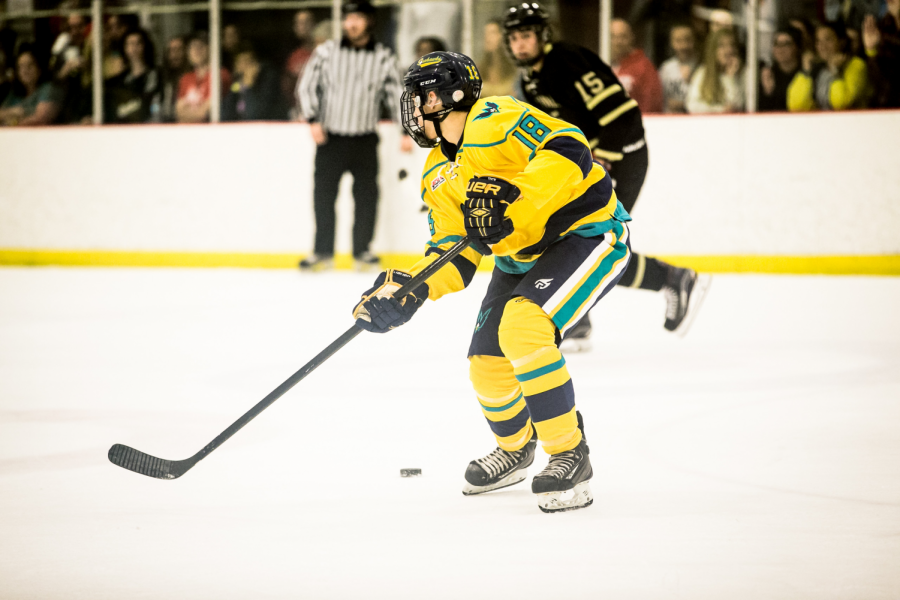 UNC Wilmington club hockey will close their 2018-19 season with a Carolina East division matchup against Duke Friday night in Hillsborough. The game is set to begin at 10:15 p.m. at the Orange County Sportsplex.

A closer look at Duke

The Blue Devils come into this game with a 2-10 record on the season and have scored one or fewer goals in seven of those games. The ‘Icehawks’ struggled as well, with a 3-11-3 record on the year; this is a game that both teams view as a momentum builder for next season. However, the Seahawks still need to respect their opponent which is something that defenseman Will Tooke says has been a struggle for this team.

“This season, we have played better against teams that we know are going to be tougher. We know we can’t fall into that same bad habit,” said Tooke. “The boys have been talking and we all agree that we can’t really get down by one and give up. We have to keep the momentum going no matter what.”

The emergence of Kent Mclaughlin

One of the major bright spots to the club hockey team this season has been the performance of defenseman Kent Mclaughlin. Both assistant coaches Tony McCabe and Peter Gilinson have spoken highly about Mclaughlin and the importance he has to this team going forward.

“It feels good,” said Mclaughlin about what it means to him to hear the coaches speaking so highly of him. “I just try to bring a little bit of consistency and try and play within my means and do my job.”

Despite all the roster turnover the Seahawks have had to go through due to injury, Mclaughlin has been one of the mainstays on the blue line all year. Heading into the Duke game, Mclaughlin is hoping that the team can play to a level to where they feel like they could have been all year.

“Time and time again (this year), we knew we were the better team and we underperformed for one reason or another. At this point, we are just playing for pride.” Mclaughlin added that it will be good for the team to end this season on a good note and look forward to next season knowing the talent the team will be bringing back.

Tooke’s transition from forward to defenseman

For captain Hunter Phillips and Tooke, this season will be remembered for the sacrifice they made to switch positions from forward to defenseman, in order to help the UNCW blue line.

“It’s a little uncomfortable at times,” said Tooke speaking about what the transition has been like for him. “It’s kind of nice because I don’t have to worry about getting my head taken off all of the time. I’ve been getting a lot of help from players like Chris Schwartz and Coach McCabe and it (the transition) has been a lot easier of a process for me.”

Mclaughlin has also helped with the transition for Phillips and Tooke and has mentioned to both that when switching to defense, it is all about communication and knowing when to take risks and when to play it safe. Mclaughlin also had high praise when it came to talking about the kinds of players Phillips and Tooke are.

“They both are phenomenal skaters, so they have a little more flexibility than most stepping back to defense,” Mclaughlin said. “They can make up for any small mistakes or any miscommunications because they have the speed to catch up and get in the right position.”

Moving forward to next year

Following the game against UNC Charlotte last Saturday, Gilinson mentioned that he wanted the team to treat the Duke game like it was the first game of next season. That is exactly the kind of mindset that the team wants to have according to Tooke.

“This season has kind of been a learning curve and I think we were a little late to kind of hit our stride. I think this game is really going to set the tone for next season. We know we can play a full 60 minutes. We just know we need to stick to our system.”