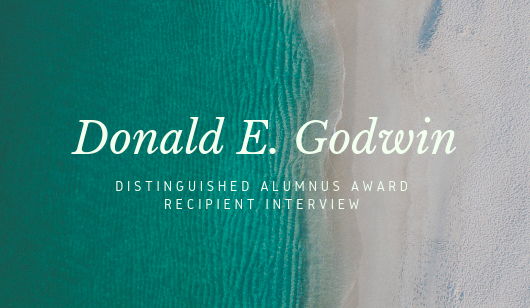 Donald E. Godwin graduated in from the University of North Carolina at Wilmington in 1969, when UNCW was still considered Wilmington College. He also received his Master’s of Accounting from the University of Memphis and his Juris Doctorate from Southern Methodist University. He has grown to be one of the most well-respected trial lawyers in Texas, where he currently resides, and in the entire nation. He is also the CEO of Godwin Bowman PC. Godwin is an incredibly humble and eloquent individual who captures the true essence of being a Seahawk.

Q. What did you study at UNCW in terms of your major/s and minor/s?

A. My degree was in Accounting and my minor was in finance. I graduated in 1969.

Q. And that was when UNCW was considered Wilmington College, yes?

Q. How was Wilmington College different from UNCW now?

A. Well, obviously, 50 years later it’s unbelievably larger. Much, much larger, and with far more areas of study that are provided to the students, more options for things you would want to study, learn about to seek a degree in.

When I was there in 1969, there weren’t many buildings on campus, but there were a lot of bright people there. It seemed to me that most of the people that I was around were involved in entertaining a business degree or marketing degree or accounting degree or economic degree, things like that. But, the school since then developed into a major university with so many more things that one can consider to study to prepare a student for later in life. It’s amazing how that school has grown in the last 50 years, but the school has grown faster in the [last few] years in my opinion.

A. Well, of course, I was working almost full time while I was in school in Winn-Dixie. That’s what enabled me to go to school, a scholarship funded by Winn-Dixie, and I was working there. My family didn’t have the means for me to go to college other than through the scholarships, so I had to work. I’d work around three quarters of the time, 30 hours a week, while I was in school, but I also started the accounting fraternity at Wilmington College. I was the first president of it, chairman of it. It was under the supervision and encouragement of Dr. Robert Appleton, a recent graduate of Memphis State University where he had been out two years.

I was the one to always to start things and get involved and be part of creating, and doing things. I started that and encouraged a lot of really, really bright accounting majors to join, and I understand it has gone on to be more successful over the years than what we’ve made it in that first year. Other than the accounting fraternity, I really wasn’t involved in any more on-campus activities because of the demands on me to work full time while I was going to school.

I graduated and went to school in three years while I was working full time. I went to school all during the day and in the summers, so I graduated in three years, while working at the same time. It was a lot of stress and a lot of straining to get it done, but I needed to get through so I could get on out into working in the world, only to find out when I graduated, I wanted to go to graduate school and get my Master’s in Accounting, and then from there went to law school. I thought when I got out of Wilmington it was all going to be behind me, and I was going to get a good job and go to work. I was not from a family that had ever gone to college, so once I graduated, I didn’t know about advanced degrees. I never decided to go to law school until the last semester of graduate school studies. The chairman of the Department of Accounting encouraged me to go to law school and become a tax lawyer, which I did.

Q. Talking more about your work, what would you say were some of your biggest cases as a lawyer?

A. I prepared a case. It was the BP Gulf Well Blowout case. A well blew out in the Gulf of Mexico in April of 2010 and it released four million barrels of oil into the Gulf of Mexico. It was the largest oil spill ever in the world. I was hired by Halliburton. Halliburton is a major oilfield services company with offices all over the world. I tried for eight months, five days a week which is unheard of. I tried and won it for Halliburton. [It was] the largest case, environmental case, of its kind ever filed and tried in the world. I still hold that record which was the Gulf Well blowout case with BP and Halliburton as its major defendant.

They had a million plaintiffs, landowners, and property owners on the Gulf of Mexico that sued BP and Halliburton. I won it for a zero verdict for my client and BP got stuck with $82 billion. It was a big victory for me and my client and my law firm, a huge victory, largest ever of its kind. I have that case, and I’ve tried several large cases, Jerry Jones for the Dallas Cowboys who I represented for many, many years and Ross Sparrow, who as you may know ran for president in the early 90s.

I’ve tried many cases across thirty states in the country, but the BP Gulf Oil blowout was the largest ever. After winning that, Halliburton bought a flag and they flew the flag one day over the State Capitol in Austin, Texas, in honor of me for winning that case. I thought that was kind of cool. I also represented Vice President Dick Cheney in a lawsuit.

Q. What do you feel is your greatest accomplishment, whether it be professional or personal, and how do you think that affected you becoming a recipient of the Distinguished Alumni Award?

A. I honestly have no idea. I appreciate the honor. I received the same distinction from the University of Memphis, where I was also placed in the hall of fame, a title only 12 people hold. I’ve had a couple of big cases and have done very, very well in them.

All I can say to you is that I’ve never thought about getting awards or focused on it. My focus is just doing a great job for my clients who entrust their problems to me and that goes back all the way to Wilmington College. I came from a family where no one had ever been to college. My dad went to tenth grade in high school, and my mother graduated high school, but was a housemaid. My dad was a farmer, and later a mechanic, then a car salesman. I come from a family of hardworking people. I learned at Wilmington the value of working hard. I was introduced to the idea that the harder you work, and the more education you obtain, the greater the likelihood was for you to get a meaningful job in your lifetime. I had never known that before. We were talking about check-to-check and making a living. I learned at Wilmington, particularly under Dr. Appleton, who became a friend of mine and talked to me a lot, because he seemed to think that I had potential and encouraged me to go to graduate school.

I learned what it means to work hard and study, and to never be satisfied with what you know and where you are in life. Always strive to grab the next cloud and always strive for further achievement. Don’t do it for purposes of economic gain because that will follow, but for what you can do to contribute to society, to your business, to family, and your profession. I never lost sight of that. I never forget where I came from, and I’ve been named one of the fifty top lawyers in the United States. I never let those things go to my head and make me think I’m any better than any other person. I’ve learned that if you can relate to the common man, you can walk amongst kings. My greatest accomplishment is my willingness to learn and my ability to learn and how to relate to everyday people.

Q. What traits do effective lawyers have?

A. Perseverance and commitment. Commitment to your client. Knowing that you’ll do everything you can within the eyes of the law to succeed for your client. My job and the oath I took as a lawyer is to provide the best representation I can without trying to be the judge or jury of their case.

Q. Do you have any advice for students at UNCW who are interested in going into Law?

A. I believe studying English, languages, and writing is very important as a lawyer. You have to be a good writer that can make coherent sentences. You have to be one that can convey a message using the simplest of terms. You just want to be concise and thorough.

As a young lawyer, you want to develop a real need to help people solve their problems. You have to be open-minded and think out of the box to see both sides of the argument. If all you see is your side or your client’s side, you’ll never understand how to take care of the problem. You got to be dedicated and committed to give your time to your profession.

The answers and questions in this interview have been edited for clarity.