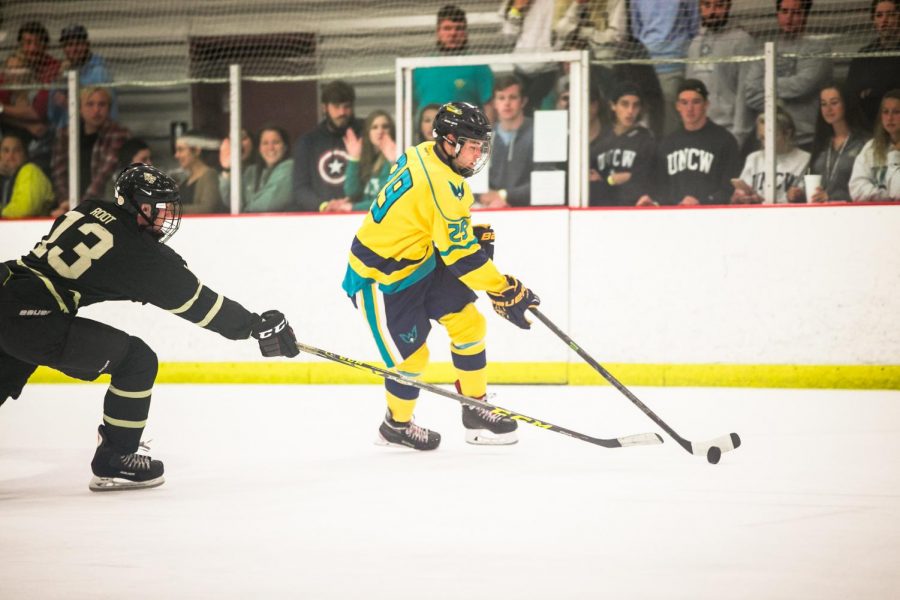 To say luck hasn’t been on the UNC Wilmington club hockey team’s side this season would be an understatement. That’s what made its 4-3 win against Coastal Carolina (11-7-1) all the more impressive.

The Seahawks’ won in the waning seconds of Saturday night’s game courtesy of a power play goal by senior forward Greg Wiklund. The win represents the first of the season for UNCW (3-10-3) at Wilmington Ice House.

In the second period, Coastal Carolina’s leading scorer Brendan Eng Low did what he has been doing all season. Low was able to beat UNCW’s Ryan Besemer to even the game at two.

With 38.2 seconds left in the game, Coastal Carolina took a minor penalty that allowed the Seahawks to skate five on four for the rest of regulation. The Seahawks practice the power play often in practice for moments like Saturday night. With the advantage, the Seahawks had just enough time for a final stand before overtime.

Thanks to Wiklund, overtime would never come. As the Seahawks skated towards the goal in the final seconds, Wiklund took a back door, got the puck and saw just enough of a gap to take and make the game winner.

‘Icehawks’ play without two of their starting defensemen

A win against Coastal Carolina did not come easy for UNCW as the Seahawks were forced to play without two of their top six defensemen. Kent Mclaughlin and Tyler Dunphy were both unable to play which forced the team to move forwards Will Tooke and Hunter Phillips to defenseman to overcome this challenge. This made it so that the Seahawks only had four defensemen dressed the entire game.

“Hunter and Will are two of our best forwards and they dropped back to D a few weeks ago and they have just been getting better and better,” said head coach Matt Huestis. “They are great skaters, strong on their feet and both getting bigger and stronger each practice.”

Huestis also gave credit to his two defensemen that normally play in Kieran Miller and Tyler Feast, adding that it was the proudest he had been all year when it came to their performance.

To say the Seahawk penalty kill stepped up in big spots throughout the night would be putting it lightly. Late in the third period with the score even at three, UNCW took two minor penalties within a ten-second span that put Coastal Carolina on a five on three for almost two minutes.

Thanks to heroic plays from Tooke and Phillips, who laid their bodies out on the line to block multiple shots in the five on three, this allowed the Seahawks to kill off both penalties and get the game back to five on five.

“To kill a five on three that is 1:50 long is amazing,” said Huestis. “It was an all-around effort by everyone that went out on the ice. I think we might have had six blocked shots on that kill and then Besemer was also outstanding as well.”

The ‘Icehawks’ will return to the ice next weekend to play a road game against UNC Charlotte. The game will be played Saturday, February 2 at 2:30 PM at the Extreme Ice Center in Indian Trail.