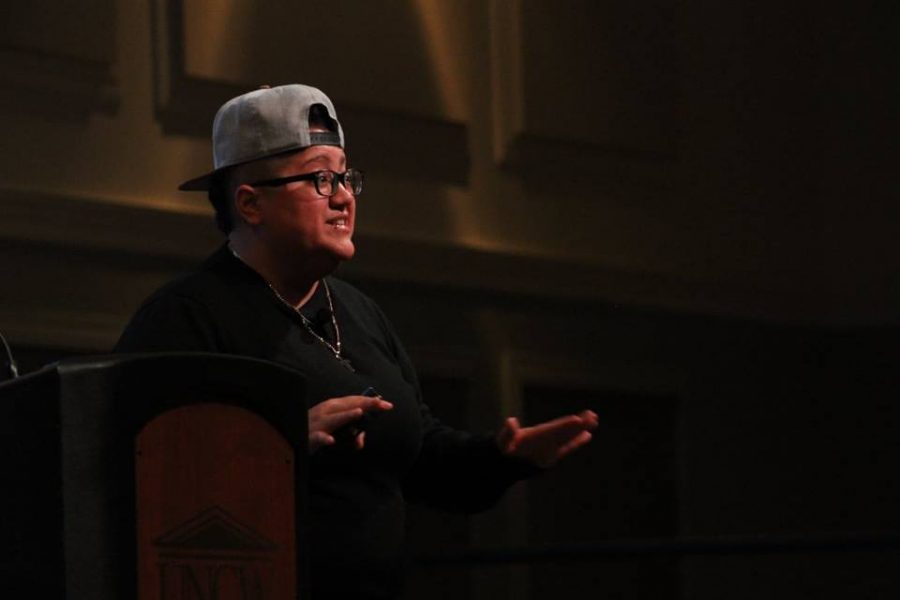 “I fill my stories with love notes for queer kids of color,” Gabby Rivera wrote on one slide from her presentation, quickly summarizing her entire message in one sentence.

On Jan. 23, Rivera stepped into the Burney Center and delivered her message as part of the 2018/2019 Leadership Lecture series. The title of her message was “Radical Creativity + Queer Latinx Joy,” and she spent most of her speech breaking down those last three words.

Rivera is the first Latina writer in the history of Marvel Comics and currently writes “AMERICA,” a series about the portal-punching, lesbian Latina superhero America Chavez. Chavez is Marvel’s first Latina lesbian superhero, described by Rivera as “generic Latinx” because she doesn’t come from a specific country or island in Latin America.

As a queer Latinx herself, Rivera uses a lot of her real-life experiences and beliefs to create this character’s world, whether it’s creating a world where America Chavez can naturally have two mothers or allowing characters that don’t normally get to be superheroes, namely “jiggly fat people” and “grandmas.” She even named the main college in the story “Sotomayor University” after one of her idols, fellow Bronx native and current Supreme Court Justice Sonia Sotomayor.

“Put your heroes in your work,” Rivera said. “Uplift their legacies. Make ‘mainstream’ audiences adapt to your culture.”

A few people during the question-and-answer portion of the event asked why Rivera chose to identify herself as queer over anything else, and she responded by saying that she didn’t grow up around that word, instead of hearing the “F-word” and “D-word” around the Bronx.

“For some, queer is a bad word because people called them that in middle school, or high school, or every day of my life,” Rivera said. “But for me, queer is my identity.”

The LGBTQ+ community is very prevalent in Rivera’s work, both with “AMERICA” and her 2016 novel “Juliet Takes a Breath,” but what both of those stories share with her contribution to the “Lumberjanes” comic series is a focus on the Latinx community.

One thing Rivera finds fascinating is that “a Puerto Rican from the Bronx can kick it with a Salvadorian from the Bay Area” and be totally comfortable. Speaking of the Bronx, Rivera mentioned that one aspect of “Juliet Takes a Breath” that she was especially proud of was the fact that it painted the area in a good light rather than a drug-filled, racially tense warzone.

“It’s all those stories that came before me that allow me to write a story that’s not centered around that,” Rivera said. While a lot of focus these days is on the differences between people, Rivera wants to focus on the bonds we can form.

This is down to Rivera’s self-proclaimed hippie vibe, as she puts a lot of stock in joy, be it her own or that of those around her. She describes it as “the joy of not knowing whether or not you’re going to survive tomorrow… and still being able to find happiness.”

Rivera’s stories are meant to bring that kind of happiness. She mentioned at one point that she did not create America Chavez, but when she was given the reigns to the character, she didn’t just want her to go around and punch things – though Rivera does have a soft spot for having the character punch Nazis.

“I give tremendous ‘F-words’ about your joy.”