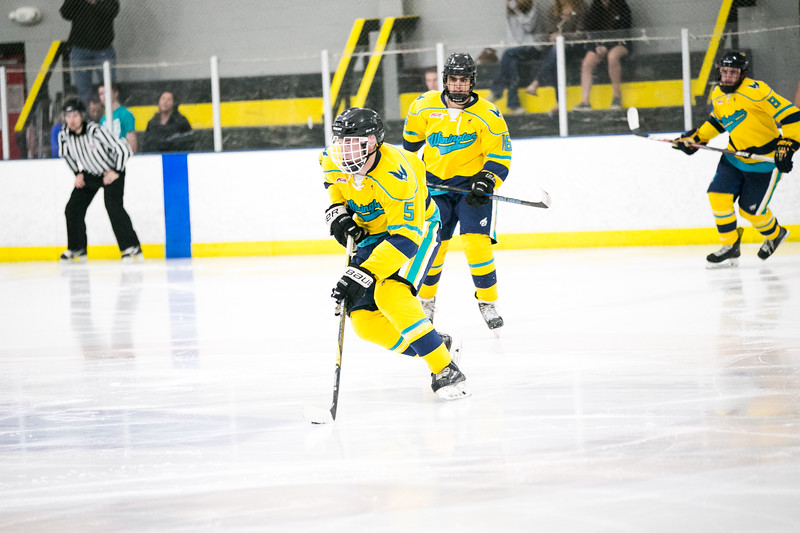 UNC Wilmington club hockey completed its first home weekend of the spring semester with a Saturday afternoon tilt against North Carolina State. However, the Wolfpack (17-0) proved why they are one of the best teams in the entire southeast region of Division Two as they defeated UNCW (2-10-1) by a final of 13-1.

Following a Laythe Jadellah minor penalty for slashing 41 seconds into the game, it looked like UNCW could get off to the extra strong start they needed against the undefeated Wolfpack. However, a shorthanded goal from NC State’s Peter Szarek with 18:13 left in the first period put the Wolfpack ahead 1-0 and forced the Seahawks into an early deficit.

“When we came out for the second period, instead of trying to win the game, we were just trying to win our shift,” said captain Hunter Phillips. “I think we did a good job with that coming back and playing every shift.”

Nikita Anistratov added two of his three goals of the night to start the second period pushing the lead to 9-0 by the midway point of the game.

Working on the power play has been something that the team has become accustomed to doing during practices, especially under the leadership of assistant coach Tony McCabe. After a Cameron Mazikowski slashing penalty with 7:24 left in the second period, the Seahawks were able to go on their second power play of the night.

UNCW’s Greg Wiklund was able to capitalize on the power play and give the Seahawks their only goal of the night. In a game that was out of hand early on, a power play goal was something that the Seahawks can take as a positive from this kind of game.

“It’s always gratifying because we work so hard at it,” said assistant coach Peter Gilinson. “The idea that we can get one says, ‘See it does work’ and now believe in yourselves and go out and do it again.”

Moving forward will be the key

With four games left in the semester for the Seahawks, the team will use this as a lesson going forward that these kinds of games happen in all levels of sports. However, it is how you respond as a team that is the message that will be pushed on the players.

“It’s a learning experience for everyone,” said Phillips. “We can either lay down like dogs and not do anything or actually try.”

“It’s a work in progress,” said Gilinson. “We have practice this week and two games next weekend so it’s a process and that is the way we will treat it.”

Next weekend, the hockey team will travel to College of Charleston for a 9 p.m. Friday contest before returning home to play Coastal Carolina on Saturday night at the Wilmington Ice House. That matchup is slated for a 10 p.m. start.