McGrath: "It's fun to watch [the Seahawks] when they're playing unselfish and hard." 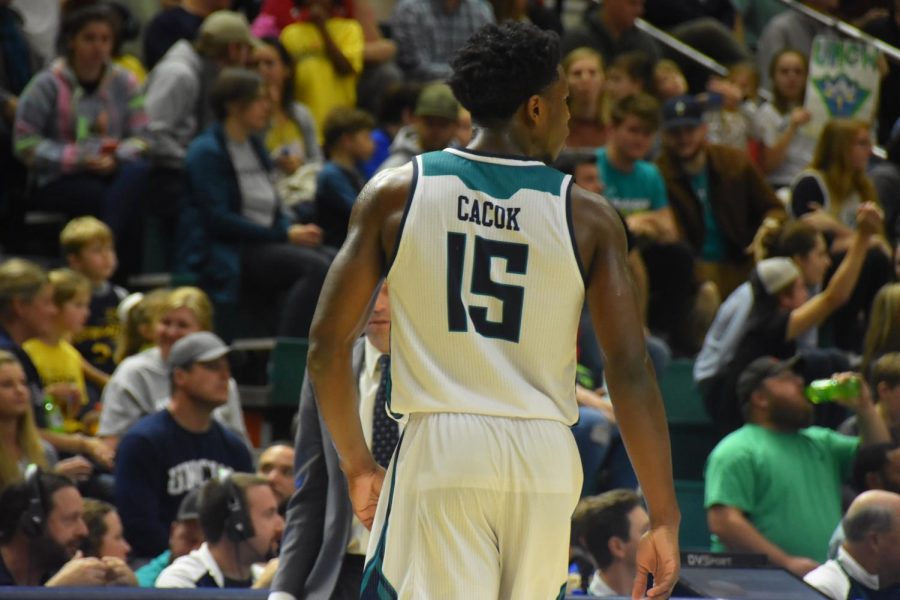 Devontae Cacok (15) during UNCW's conference opener against College of Charleston on Dec. 29, 2018.

UNC Wilmington men’s basketball provided a reason to believe Thursday’s loss to Delaware was a fluke not to be repeated with a statement win over Drexel, 97-83, on Saturday in Trask Coliseum.

The Seahawks (7-11, 3-2 CAA) were forced to “reevaluate” their energy level when starting games following the loss to the Blue Hens. Two days later, the loss appears more of an aberration on what has been a successful start to Colonial Athletic Association play.

The Seahawks conditioned more than they normally would in between games, but after Thursday night’s loss to Delaware coach C.B. McGrath wanted to emphasize the lack of effort showed against the Blue Hens would not be tolerated against Drexel (8-11, 2-4 CAA).

“They didn’t play hard enough to be tired [from the Delaware loss],” said McGrath. “It sent a message that it was unacceptable. UNCW plays harder than that. We let an opportunity slide by on Thursday by not competing.”

A competitive first half ended with the Seahawks hitting five of their last eight shots. A 28-11 run midway through the second half erased a two-point halftime deficit and put the game away for UNCW. The win was the second of the season for the Seahawks when trailing at halftime.

If one UNCW player would step up against Drexel, the rest of the team could then feed off that energy and get back into a consistent rhythm. Instead of just one, almost every player contributed to the win against the Dragons.

Two double-doubles courtesy of senior forward Devontae Cacok (24 points, 12 rebounds) and freshman guard Kai Toews (10 points, 13 rebounds) along with Cacok and Gadsden being joined in the 20-plus point club by forward Jeantal Cylla (20 points, 6 rebounds) were more than enough for the Seahawks to erase the bad taste of the Delaware loss.

“We had to look in the mirror and take it more personal,” said Gadsden. “Not let something like Delaware happen again.”

The Seahawks now turn their attention to a road trip that features current-CAA frontrunner Hofstra and preseason favorite Northeastern. They are still undefeated in CAA road games.

It took Cacok longer than expected to break Keith Rendleman’s all-time rebounding record at UNCW. Due to a technical foul issued to him against Delaware, Cacok was unable to start per a team rule.

When a missed three-point shot by freshman Jaylen Sims bounced off the rim, Cacok pulled in his 1,056th rebound at the 12:27 mark to stand alone on top of UNCW’s career rebounds list.

“It’s good to come out and do it for the school. It’s always just me trying to help out my team,” Cacok said postgame. “Whether that be rebounding or whatever it may be, I try to do that.”

Cacok was honored before the game for becoming the third Seahawk ever to accumulate more than 1,000 points and rebounds in their career. He finished the Drexel game, with 1,067 career rebounds, so here’s guessing whatever number he finishes with won’t be matched for some time.