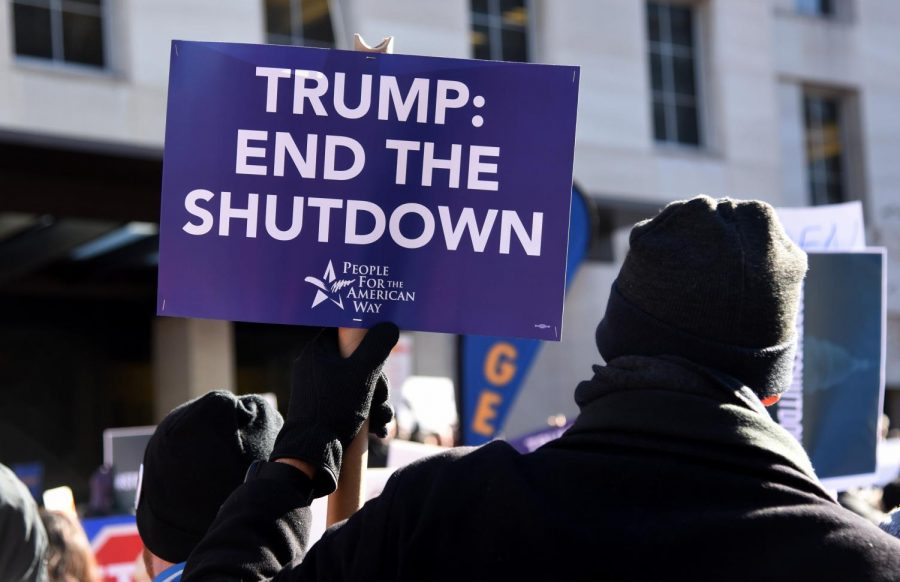 On the 20th day of a partial government shutdown, furloughed federal workers, contractors and union representatives gathered before marching to the White House to demand that President Trump reopen the government on Jan. 10, 2019 in Washington, D.C.

On Dec. 22, a partial government shutdown took place when lawmakers failed to come to an agreement on President Donald Trump’s requested wall along the Mexico-United States border. The disagreement is largely between Congressional Democrats and the Trump administration, with Democrats not wanting to fund the wall.

The estimated cost for the proposed wall was about $5.7 billion, according to NPR News.

According to BBC News, 25 percent of federal employees are affected by the shutdown, including those who maintain national parks, which amounts to approximately 800,000 people.

Employees affected by the shutdown are required to work, but are not receiving payment.

Paul M. Rinaldi, president of the National Air Traffic Controllers Association, wrote a letter on the NACTA website expressing concern for the shutdown.

“Even though air traffic controllers and traffic management coordinators remain on the job, they don’t know when they’ll receive their next paycheck and that adds more stress to an already stressful profession,” said Rinaldi. He later addressed in the letter that, “The furloughs make an already complicated job more difficult by removing a key human component from the NAS.”

Joe Pinetti, who works as an IT contractor for the U.S Fish and Wildlife Service in western Massachusetts, has said that the shutdown has added a financial burden. In addition to working with the government, Pinetti is receiving his bachelor’s degree in information technology.

“It’s going to be rough,” Pinetti said NPR News. “I’m digging into my savings right now.” He added that he may take off a semester from school depending on when he will receive pay again.

Many people have taken to Twitter criticize the partial shutdown under the hashtag #ShutdownStories.

“Thankful I have two jobs because I’m not getting paid at TSA,” said Twitter user Heather Manus. “But I still have to show up. Which means I have to work both jobs every day, sleeping two to three hours at night, just not to even break even on bills.”

Many who haven’t been directly affected condemned the administration for the shutdown.

“It’s exhausting to read all these #ShutdownStories—how much more to live it,” Twitter user Allison Boley said. “We need a long-term fix. What laws need to be changed or enacted to ensure that no President and/or Congress of any party has the power to negatively affect lives in this way ever again?”

Some have argued that federal officials responsible for the shutdown should not be getting paid, either.

“How about this – Administration officials, Senators, and members of the House refuse to accept their paychecks until all Federal employees receive theirs?” said Twitter user Timothy Pilachowski.

Despite the backlash, there is no sign that the shutdown will end any time soon.

Trump delivered his first Oval Office Address on Jan. 9 to discuss the shutdown. He stood firm on his demands for the border wall and said Democrats were at fault for not coming to an agreement. He added that he may call an emergency declaration if the standoff continues.