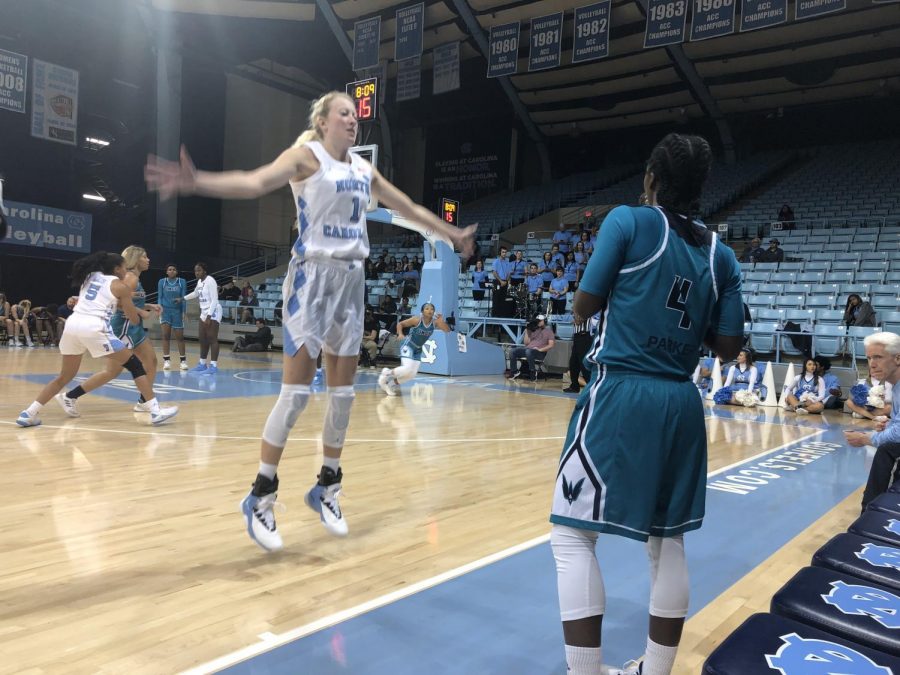 It was the second loss in as many seasons for UNCW against its in-state Atlantic Coast Conference opponent. UNCW will hope to avoid a similar fate against Pittsburgh when it next plays on Dec. 18.

The Seahawks (5-3) did not have the services of guards Shrita Parker and GiGi Smith during last season’s loss to the Tar Heels (6-4) due to transfer rules. With the addition of those two combined with sophomore Lacey Suggs gave them a reason to believe they could at least be competitive against its Power-5 opponent.

While Smith shook off a poor start to finish with 18 points, Parker struggled and finished with 14 points and 0-for-9 from three. That’s how things went for UNCW.

UNCW (4-for-22 from three) struggled to keep up with UNC, who shot about the same from three-point range (48%) than it did from the field (49%). Junior guard Timber Tate had two three-pointers which were the most makes for the Seahawks in the game.

It’s not often that a single player can mathematically beat you, but that’s what UNC guard Stephanie Watt almost did to the Seahawks. Her 35 points were a season-high and put the Seahawks early with three three-pointers in the first three minutes for the game.

“I’ve known Stephanie since high school, she has a quick release,” Smith said postgame. “She had to step up and she did that tonight.”

From there, the Seahawks never recovered despite outscoring the Tar Heels by five points in the second half.

Aside from the onslaught of three-pointers by Watt and the Tar Heels, the Seahawks did have positive things to take away from the loss.

It matched UNC with 22 points in the paint through the end of the third quarter and pulled in more offensive rebounds than the Tar Heels. However, the Seahawks only managed six points on their 12 offensive rebounds.

They also limited itself to seven turnovers to the Tar Heels’ 15 giveaways. UNCW had more success converting the turnovers into points with 18 points.

UNCW outscored UNC by five points in the second half. If the energy they displaced after halftime was present throughout the game, they would have stood a better chance of pulling off the upset.