Seahawks should now be judged on how they finish, not how they start. 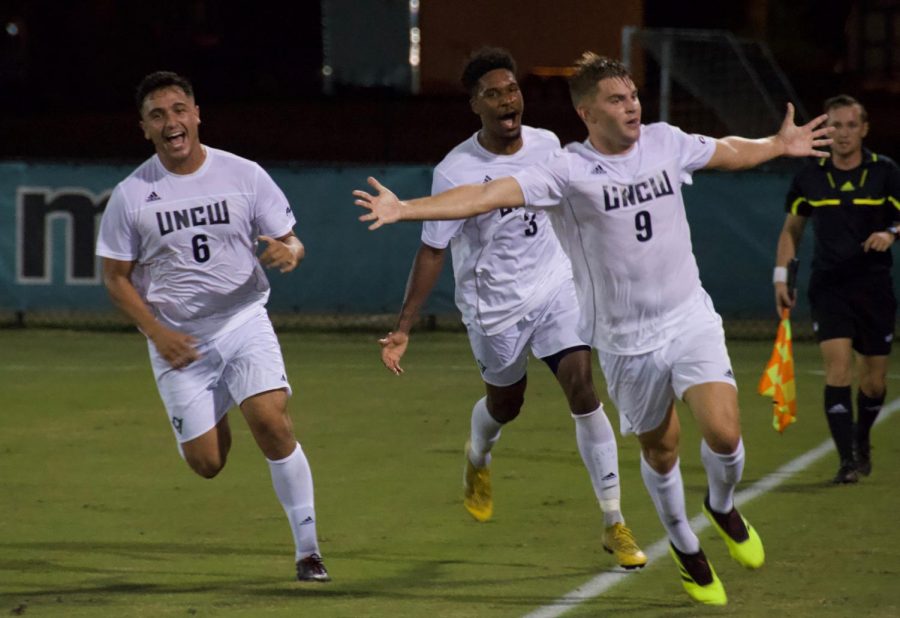 No. 9 Emil Elveroth celebrates after scoring his second goal in 77 seconds along with no. 3 Jamil Gracia and no. 6 David Lozano

The UNC Wilmington men’s soccer program, in many respects, had an improved 2018 season as opposed to 2017. The Seahawks were one of the top-25 teams in the nation virtually all season long, even ranking as high as the top 10 some weeks. They battled through the adversity of Hurricane Florence and beat teams they normally had trouble beating in the past, such as N.C. State (3-0) and James Madison (2-0).

Junior forward Phillip Goodrum’s 12 goals and four assists led the Colonial Athletic Association in scoring and helped him become the first Seahawk in ten years to be named conference Player of the Year. His strike partner, sophomore Emil Elveroth had a breakout season of 11 goals and five assists. The pair were two of several Seahawk players who were named to CAA All-Conference teams and North Carolina Collegiate Sports Information Association (NCCSIA) squads at the end of the season. Most notably, they reached the NCAA Division I College Cup in back-to-back seasons for the first time in their history.

And yet despite all the successes, many of the usual late-season struggles still plagued the Seahawks. After the statement victory over NC State on Oct. 16, UNCW went winless in five of its last six games. One of the most frustrating games of this stretch was the game against Northeastern to end the regular season on Oct. 30.

In a game where a draw would have been enough for the Seahawks to win the CAA regular season title, they enjoyed much of the attacking play with a dominating 16-7 advantage in shots. Despite that, the Seahawks wound up falling 1-0 in Boston to a Huskies squad who were fighting for their playoff lives – while the result earned the Huskies the sixth and final CAA Tournament spot, the Seahawks’ only conference loss meant they had to settle for the regular season runners-up position to JMU for the second straight year.

Perhaps more frustrating than that was the loss to third-seeded Hofstra in the conference semifinal. After taking a 1-0 lead into halftime from redshirt junior Danny Reynolds’ free kick, the Seahawks conceded a second-half equalizer before the Pride snatched an overtime winner to advance to the conference final. That all-important conference title again eluded the grasp of coach Aidan Heaney’s team.

Despite being in excellent form for most of the season, the Seahawks were a team on the outside looking in on NCAA Selection Day two weeks ago. While it could be argued that James Madison was fortunate to win the regular season title, the Dukes’ penalty shootout victory in the conference final is probably the reason that Team Teal got the at-large bid to begin with.

UNCW was drawn against Furman – the alma mater of recently-retired U.S. soccer legend Clint Dempsey – in the first round of the NCAA College Cup. Under the bright lights on a chilly November evening at UNCW Soccer Stadium, both teams had a host of chances, though the Seahawks had the most notable of those opportunities. Despite that, the match finished scoreless through 110 minutes and had to come down to a penalty shootout. The Paladins would go on to prevail 5-3 in the shootout, ending UNCW’s season.

Comparing how the last two seasons ended, it seems easy to say that the Seahawks took a step backward in 2018 since they won their first-round game against Presbyterian last year before falling to North Carolina. However, such a viewpoint would not only be unfair to the team but also shortsighted. The Seahawks have much to be proud of this year.

First, Goodrum’s POTY award, almost on its own, makes this season an improvement over the last. That’s before mentioning Elveroth’s breakout year, Reynolds’ consistency, the sturdiness of the center back pairing of Swedish juniors Mark Lindstrom and Wilhelm Nilsson, and the potential of freshman forward Cesar Cruz and redshirt freshman defender Drew Rabil – both of whom were CAA All-Rookie Team selections – to become dynamic game-changers in the squad.

Lastly, how the team battled through the adversity thrown at them by Hurricane Florence – being away from home and missing school for a whole month, having to play “home” games on neutral fields, and having their game jerseys stolen – is nothing short of commendable. How the players kept their heads down and continued to win games through all of that is an example to all UNCW students.

Next step for the program

Although the Seahawks graduated eight players this season, with all of the aforementioned talents returning next season – in addition to key players graduating from other schools around the conference – there’s no reason the team can’t finally achieve their goal of a CAA conference title and help coach Heaney – one of the conference’s most respected coaches – win the Coach of the Year award he deserves in 2019.

As a genuine fan of UNCW, I genuinely believe they can – and will – finally shake off the normal late-season fatigue and soar to even greater heights next season and beyond. My only regret is that I won’t be in the Port City to watch it unfold.