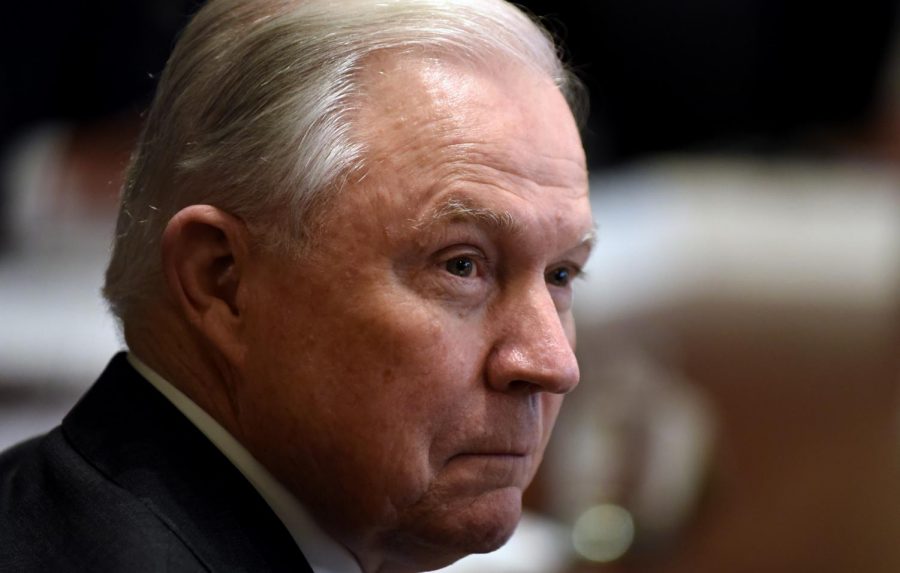 Attorney General Jeff Sessions looks on during a cabinet meeting in the Cabinet Room at the White House Oct. 17, 2018 in Washington, D.C. (Olivier Douliery/Abaca Press/TNS)

On Nov. 7, hot on the heels of the midterm elections, U.S. President Donald Trump has forced his Attorney General, Jeff Sessions, to resign.

Sessions gave his resignation letter to the president on Wednesday after pressure from President Trump himself. The president has been an outspoken critic of his Attorney General on Twitter and at rallies over the last several months. 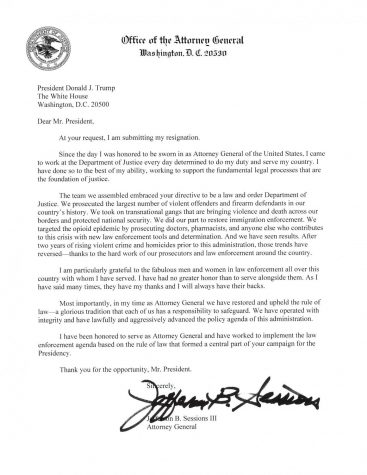 Jeff Sessions’ letter of resignation. (US Department of Justice)

Mr. Sessions had been Attorney General since the genesis of the Trump administration. He involved himself with the transition and eventually swore in as Attorney General on Feb. 8, 2017 after a confirmation process that was marked by his past controversies.

Formerly the junior U.S. senator from Alabama, Mr. Sessions was typically considered one of the most conservative members of Congress and was an early supporter of President Trump’s campaign in 2016.

Throughout Mr. Sessions’ tenure as Attorney General, he took an aggressive stance on immigration, sanctuary cities, medical marijuana and mass incarceration. While he helmed the Department of Justice, a controversy erupted at the U.S-Mexico border, during which 3,000 children were separated from their parents and placed into wire mesh compartments.

Also notable was Mr. Sessions’ 2017 recusal from the Russia investigation into the Trump campaign, which resulted in the takeover of the investigation by Rod J. Rosenstein and the eventual appointing of Robert S. Mueller III as special counsel. 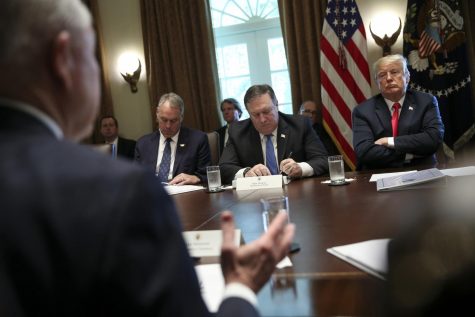 However, the investigation is now under the lead of the acting Attorney General, Matthew G. Whitaker, appointed by President Trump. Whitaker was formerly the U.S. Attorney for the Southern District of Iowa under President George W. Bush from 2004 to 2009.

Mr. Whitaker wrote in a column for CNN last year that stated that Mr. Mueller’s probe was going too far if he examined the Trump family’s finances.

However, the acting Attorney General had no immediate plans to address or comment on Mr. Mueller nor did he have plans to take action regarding the Russia inquiry, according to an administration official.

Mr. Whitaker, in the past, has also criticized the Supreme Court, saying they “are supposed to be the inferior branch” during a Q&A with Caffeinated Thoughts – a Christian conservative website – during the Iowa senate race in 2014.

Whitaker also expressed disdain for Marbury v. Madison, the 1803 Supreme Court case which established the concept of judicial review, saying that it gave the courts too much power.

He stated that didn’t believe in amnesty, taking a hardline stance on immigration, as well as being anti-abortion and against the Affordable Care Act.

Mr. Whitaker was appointed with no confirmation process. 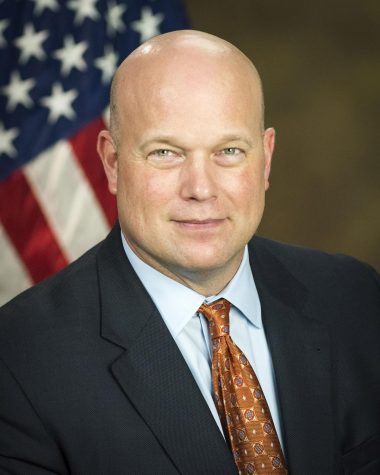 “I am committed to leading a fair department with the highest ethical standards that upholds the rule of law and seeks justice for all Americans,” Mr. Whitaker said on Wednesday in a statement in which he also called Mr. Sessions “a man of integrity.”

As acting Attorney General, Mr. Whitaker has the power to impede or undermine the investigation and block Mr. Mueller from delivering his final report on whether or not President Trump’s campaign advisers conspired with Russia to influence the 2016 presidential election.

Representative Adam B. Schiff, Democrat of California, said that any interference into Mr. Mueller’s investigation would cause a “constitutional crisis and undermine the rule of law.”

House Democrats promised an investigation into Sessions’ resignation in January when the party officially takes majority. 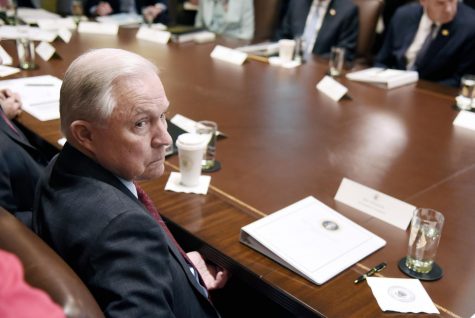 Attorney General Jeff Sessions looks on during a Cabinet meeting in the Cabinet Room of the White House on Wednesday, July 18, 2018 in Washington, D.C. (Olivier Douliery/Abaca Press/TNS)

President Trump thanked Mr. Sessions in a tweet on Wednesday, but he gave no comment to reporters on the matter.

“Thank you for the opportunity, Mr. President,” was Sessions’ final note in his resignation letter.

News Editor Tyler Newman can be found on Twitter @tnewman39.