Cucalorus 24 kicks off with Dance-a-lorus 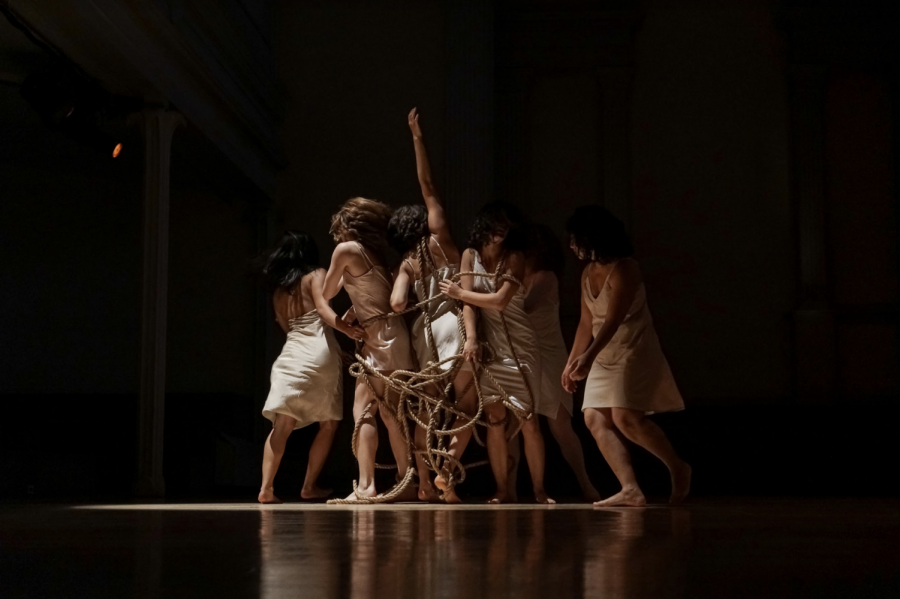 Blueprint to Oust Duterte by Rina Espiritu and Natalie Cook.

Cucalorus 24 kicked off Thursday night with Dance-a-lorus — a dance event that explores the pairing of filmmakers and choreographers. This stage event featured nine different pieces that ranged in subject nature, each leaving their mark on the Cucalorus audience.

“The Haunted Mansion,” choreographed by Kim McGee in collaboration with filmmaker Amber Mitchell, featured the narration of the popular Disney World Haunted Mansion ride. As dancers moved about the stage, one dancer took on the role of the narrator and mimicked ride’s script as well as most of the movements that appeared behind him on the screen. The mini film on the screen behind the dancers featured a copy like a version of the Disney ride set in Wilmington and also featured some of the dancers on stage. Overall, this was a fun and Halloween-esque piece that showcased both acro and jazz styles of dance. There was always something to watch as the dance moved along in telling its story — the narration of the ride.

“Blueprint to Oust Duterte,” choreographed and performed by Rina Espiritu in collaboration with filmmaker Natalie Cook, followed next. This piece featured a powerful solo by Espiritu and she performed a modern style dance. The background screen featured speeches by Philippino President Rodrigo Duterte. There was a very chilling feeling to the entire dance and Espiritu did an excellent job of maintaining the audience’s attention with both her dramatic and powerful movements and little movements when the film played. With this dynamic, it was easier to focus on the dance and not have to worry about missing something in the film and vise versa. When the film wasn’t playing, a very haunting background music played with the repetition of the phrase “you’re misjudging it.” I was hanging onto every movement that Espiritu made until the very end.

“In Memory of” centered around the message of bringing more awareness to suicide. After losing two friends, to which the dance is in memory of, Nicole Dalier choreographed this dance in collaboration with filmmaker Kate Muhlstein. The dance started off a with a solo and gradually more dancers appeared on stage as they performed to an excerpt from Kevin Hines’ BuzzFeed video, “I Jumped off the Golden Gate Bridge;” Philip Glass and Michael Riesman; The Untold. Images of brain scans appeared in the background as the dance progressed. Overall, it was a beautiful piece and Dalier and Muhlstein did a wonderful job getting their message across.

“Lucid” was a piece inspired by the philosopher Alan Watts and his question of “Who am I in this universe?” It was choreographed and performed by Emily Bannerman in collaboration with filmmakers Seth Lewis and Bo McKenzie. This was a great collaboration as both pieces fed off each other and played at separate times. The film began first and stared Bannerman dancing at different locations around Wilmington. Simultaneously, Bannerman was on stage laying down in a circle of lamps. As the film cut, Bannerman began to showcase a modern style dance. This was one of the easier ones to watch as the movie and dance didn’t go at the same times. Overall, this was a beautiful piece and wonderful showcase of both Bannerman’s, Lewis’s and McKenzie’s talents.

Act two began with “Escena de la Calle” choreographed by Linda Ann Webb in collaboration with filmmaker Patrick Ogelvie. This piece by far was the most energetic and fun to watch because of Mexican music and flashy movements. In the background, an almost animated version of downtown Wilmington played while the dancers on the stage shared different flashes of interactions or vignettes. The costumes were just as cheerful and vibrant with bright colors like pink, yellow and green. As the story continued dancers took to the side balcony’s to finish off the performance with chacha like movements with feathers and glow sticks. Overall, Webb and Ogelvie did an excellent job of creating a light and fun piece to keep everyone entertained.

Next was by the most moving and memorable piece of the night. “Class of…” was choreographed by Kevin Lee-y Green in collaboration with filmmaker Damien Capps and guest artist Michael Seethaler and tackled the subject of social change surrounding gun violence. This piece felt all too relevant given all the recent shootings around the country. It started off with Seethaler sitting at a desk on stage rapping and was followed by dancers portraying students entering the stage. As the piece moved along, the background portrayed a gunmen getting ready to walk into a school. The closer the gunmen got to walking in, the more intense the dancer’s movements became. Seethaler came on several other times to help narrate/rap the different parts of the story. It was a great use of different types of artistic abilities between Seethaler’s rapping, Green’s choreography and Capps filmmaking. Again, this was by one of the best pieces of the night and as the dance drew near the end my heart felt like it stopped in anticipation. Once the piece completed I heard several wows coming from the audience including myself.

“It’s All About Me” choreographed by Alyona Amato in collaboration with filmmaker Erika Edwards put some more lighthearted and funny feelings back into the stage following “Class of…” This piece centered around five different women talking about themselves because they thought they were better than everyone. As each dancer got their solo, a video of their different facial expressions played in the background. The five personalities revolved around fitness, social media, being right, money and time — all very relatable traits. I, and other audience members, continually laughed through this piece and overall they did a wonderful job incorporating the personalities into their movements and keeping a lighthearted air about the room.

“To be: free” was choreographed and performed by Remi Harris in collaboration with the film performer Melanie Greene and film art director Michelle Golden. This piece centered around the history and politics surrounding the black dancing body and looking toward it just being free. Harris’s solo was very encapsulating as her movements were slow and smooth much like the music as if they were both underwater. As Harris exited the stage, the film starring Green began. Green’s movements were very similar. The message was reiterated through the stunning music which featured phrases like “free” and “nothing and no one can hold us.” Overall, this was a beautiful and eye-catching performance.

“Every 98 seconds” was the final piece of the night and was choreographed by Sue Meier in collaboration with creator advisor Joy Allen and filmmakers Rebecca Busch, Christen Christian and Patti Mason. Just like “Class of…” this was an outstanding and powerful piece to watch. This piece centered around nine stories of abuse and the fact that every 98 seconds someone in the United States is sexually assaulted. On the screen, several different videos and images appeared — a damsel on a railroad, a woman being harassed at work and news clips from the Me Too movement. The dancers on stage portrayed various scenes of men forcing themselves upon women in the beginning, but as the story progressed a shift to women empowerment took center stage. Throughout the entire performance, I found myself getting chills because the performance was that powerful. The ending was wonderful as the dancers on stage with various people in the audience stood up with signs that read things like “Me Too,” “Times Up,” and “Make it stop.” Following the performance, everyone stood up and cheered and applauded. I left that theater feeling charged and powerful.

Overall, dance-a-lorus was a wonderful showcase of many different artistic talents was a great way to kick of Cucalorus 24. Make sure to check out the rest of the Cucalorus’s events by visiting their website for showtimes and tickets.