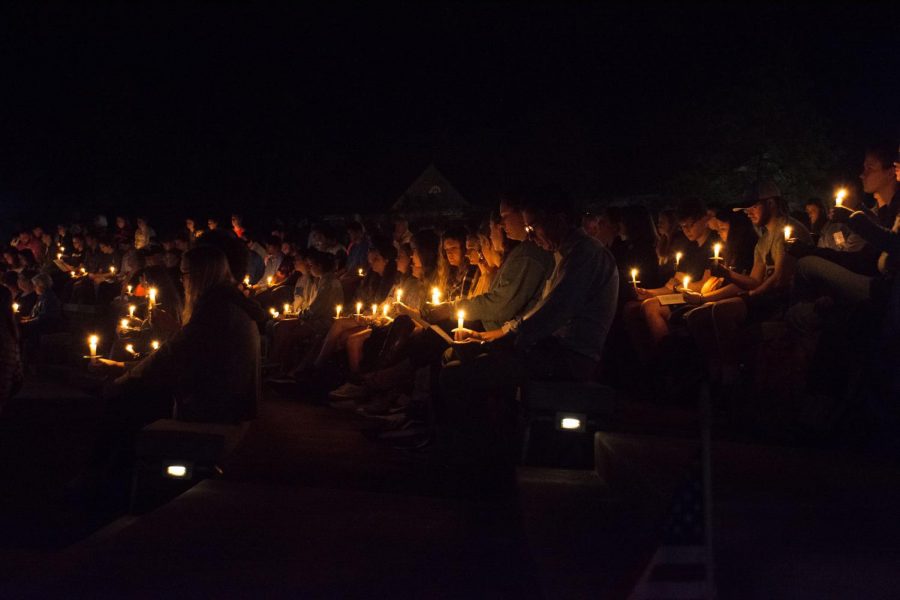 UNCW students joined their peers from UNCW Hillel to mourn and honor the victims and unite against antisemitism in the campus amphitheater on Monday, Nov. 5.

On Monday, Nov. 5, UNCW Hillel — the Jewish student organization on campus — held a vigil honoring the 11 victims of the Tree of Life Synagogue shooting that occurred in Pittsburgh, Pennsylvania. Students, faculty and community members gathered and filled the amphitheater outside of the Fisher Student Center on campus.

The event was held to mourn the lives lost, to act against anti-Semitic rhetoric and actions in the country and finally, to symbolize the unity, strength and support of the Jewish community in Wilmington.

The shooting occurred in the morning of  Saturday, Oct. 27. Robert Bowers, 46, opened fire while shouting anti-Semitic statements during a service with an AR-15-style assault rifle and multiple handguns, according to the New York Times.

Bowers’ actions ended with 11 dead and at least six injured. The victims ranged from ages 54 to 97, the oldest of whom was Rose Mallinger, a Holocaust survivor. The UNCW-led vigil honored each victim by reading their names and refusing to forget about them.

The Tree of Life Synagogue shooting has been described by many as “the deadliest on the Jewish community in US history,” according to CNN. The event occurred over 14 months after the antisemitism rallies in Charlottesville, VA sparked fear in Jewish communities across the country.

“When an event like this happens … it affects every Jew in the entire world, especially in the United States,” said Goldberg.

UNCW Hillel reports on their website that there are roughly 150 undergraduate Jewish students at the university, but that they “want Hillel to be a place for [the UNCW community to] deepen [their connection] with Judaism and to experience being a part of a welcoming campus community.”

“The amount of people that came out tonight means a lot more than anyone could ever know,” Goldberg said.