“You can offer them your smile:” UNCW’s beloved Ms. Britt shares her story 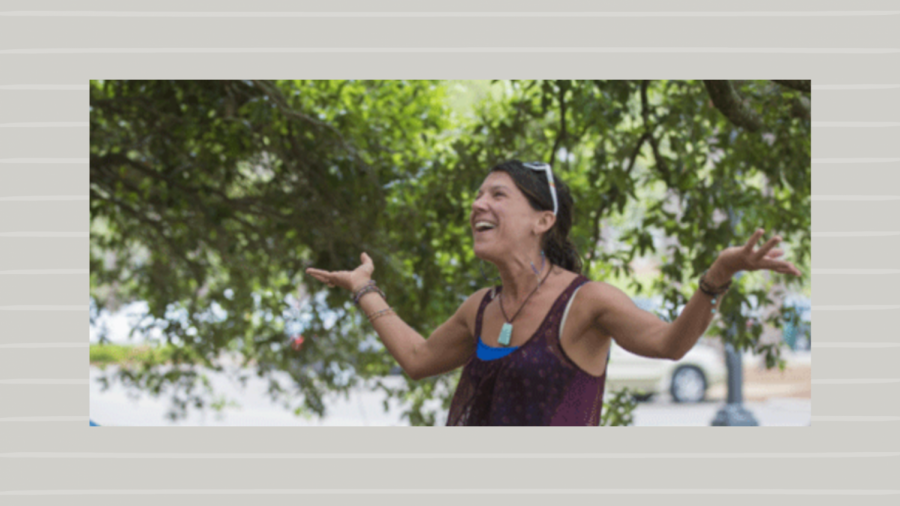 On any given day, Ms. Britt’s English class can be found performing soliloquies in homemade togas, playing catch with a mutilated baby doll or doing yoga poses on the lawn. If you are not fortunate enough to know her, you would probably refer to the UNCW professor as “that teacher whose class is always outside and laughing.”

Britt’s teaching style is a direct reflection of her personality and outlook on life. Exclamations of “Best day ever!” can frequently be heard coming from the English building in a voice that could convince absolutely anyone that it is, in fact, the best day ever. Her office is a cozy little nook in Morton Hall that is free of all harsh lighting and negativity, the walls completely covered in notes, letters and drawings she has received from students and friends.

Ms. Britt’s appearance is as free and lively as her attitude. The woman’s slender sun-kissed skin is almost always covered in colorful fabric draped across her shoulders as if it fell from the sky and gently landed upon her being. The muscles in her arms are lean and toned, probably because of the fact that she runs the Loop at Wrightsville Beach every single day or as a result of her extensive yoga training.

When she hears something that lights her heart up, she claps her hands together or bangs them on the table, creating a rhythm of joy that echoes through the air. Her hair shoots from her head like curly little sprouts, so full of life and motion, the color of soft soil a few days after a heavy rain. When she enters a room, her presence is immediately noticed, not just because of her knack for conducting a room, but because of the warm light that follows her around wherever she goes.

Much like her presence in the classroom, Britt’s journey to becoming a professor wasn’t exactly ordinary. She attended UNCW in the late 90’s and majored in English, not once attending a formal education class during her undergraduate years. Instead, she credits most of her teaching abilities to the many times she spent playing school with the kids she babysat.

Ms. Britt has always been one to think outside of the box. Her freshman year, she lived on the fourth floor of Hewlett, where smoking was allowed and she was one of four girls on the entire floor. The living situation was not ideal. To get out of her housing contract, she composed a handwritten note falsely claiming that she was pregnant, sent it to Housing and Residence Life and moved into an off-campus apartment.

Towards the end of her senior year, Britt was leaving an English club meeting one evening and ran into a stranger named Audrey next to the dumpsters behind Leutze Hall. Right then and there, the two girls slammed a couple spontaneous PBRs, chatted for a while and decided to backpack Europe together. The next summer, they explored eighteen different countries and built a friendship that remains just as strong today.

Like many Seahawks, Ms. Britt developed a deep love for the university and the friendly, easy going people of Wilmington. Whenever she shared her dream of becoming a professor at the school, countless people told her that she would never get hired without a Ph.D. and some experience as a Teaching Assistant.

So what did Britt do? She enrolled in graduate school and instead of applying to be a TA, she set off to study abroad in Australia. During her time there, she lived among the Aboriginals and learned their natural way of living, hiking all over the country and connecting to the people there.

When she returned, she acquired a temp job in a departmental office at UNCW, spending her time delivering mail and filing paperwork for her favorite former professors. This was basically the best job ever. She even “accidentally” attended a faculty meeting one day and then ended up being asked to stay in the meeting, moving herself to a first-name basis with many of the attendees.

During this time, Ms. Britt taught classes at Coastal Carolina, Brunswick Community College, Cape Fear Community College and even a second-grade class at a school in Southport. The elementary school class was especially interesting – the children had to keep reminding her that they were only seven years old.

One day out of the blue, Ms. Britt received a phone call from a secretary in the English department at UNCW. One of the classes was lacking a professor and they found Britt’s name in a pool of applicants, a shiny needle in a haystack of qualified individuals. Suddenly, she had an interview for the job she had been dreaming of for years.

On the morning of the interview, Ms. Britt donned her most professional attire, glanced at her UNCW vision board for inspiration and set off towards campus. Only minutes from her destination, traffic came to a standstill because of a mama duck and her ducklings making a slow trek across Oleander Drive. Fearful of being late to her dream job interview, Britt panicked a bit, but looking back now, she views the ducks as symbolic of her and her dear students.

Britt got the full-time teaching job, proving everyone wrong who told her she had to follow a specific education path to get there.

“It’s all about the hands you shake, not the grades you make,” she tells every student who crosses her path.

Many years ago, Britt wrote on an index card the three things she wanted most out of life. It read, “I want to travel the world, I want to be paid fine, and I want to inspire others.”

Travel is one of Britt’s greatest passions in life. She has been all over the world and taken more spontaneous trips than most people would be able to fit into a lifetime. In fact, her current count is at 57 countries. Every summer, she chooses an exotic place outside of the United States to go and explore. While abroad, she likes to send herself postcards so that when she gets back home she has a little souvenir from her adventure waiting for her.

This summer, she is considering going to Hawaii because she fell in love with the airport during a layover there. As far as home goes, Britt claims she could only live in Wilmington, Hawaii or California. Austin, Texas is the only place she could live that isn’t on the water.

In 10 years, Britt sees herself living in Hawaii, still traveling and writing children’s books. She absolutely adores teaching but doesn’t want to ever get to the point where she no longer loves what she does.

“Seinfeld did that! He left while he was on top and happy!”

She also hopes to be married.

“I want to be in a partnership that I can share the love of life with and grow in the way that you can grow with a romantic partner. I’ve been in relationships in the past but was still searching for myself. I knew that I needed to grow to love myself first.”

Ms. Britt claims to be her own worst critic and emphasizes the importance of self-love to everyone she comes across. She has come a long way on her journey of learning to love herself and believes her own struggle has played a role in making her the kind and exuberant person she is today.

“If you can’t offer anyone anything, cause I never thought I could, you can offer them your smile.”