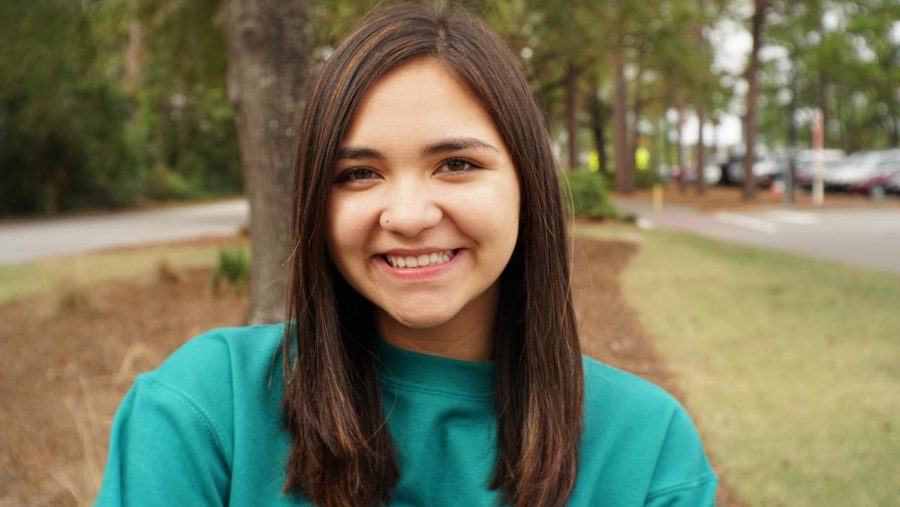 Photograph by Jordan Bell, Humans of the Dub

Does your name [Autumn] have a backstory related to this season?

Yeah! My mom always told me “Fall is a beautiful reminder of how truly gorgeous change can be.” So my mom loved the name, and I was going to be born in the Autumn season. My birthday is in October. My mom and dad were fighting over the name in a grocery store. After my dad named my sister, my mom thought she should be able to name me. As they were checking out, the cashier girl’s name was Autumn, so my mom was like “Ha!” So that’s where I get my name from.

Since we’re nearing the spooky season, what are you most afraid of?

I can’t watch scary movies about paranormal stuff, because I’m religious, so that stuff can really happen! I watched the Nun, don’t ask me why, and I had nightmares for a month! I had to sleep with my dog over the break from the hurricane for an entire month. It was terrifying. If it can happen in real life and I could get possessed, I’m done. I’m out of there. Because those spirits never die either, so that’s my biggest fear.

What scares you most about? How it can feel real sometimes or that it’s based on a true story?

Yeah. So I saw Halloween the other night, and I said to myself “Okay, a serial killer isn’t going to come and kill 9 people with a knife in one night.” That’s stupid. If I could justify something happening like a demon coming inside of me, taking over my life, and killing me, then I get scared.

When people look at you, what do you think they see/think?

I’ve been told that when people look at me they think I’m mean. Which is harsh. I think I had developed a way – when I wasn’t so confident – of faking it until I make it. I think while doing that, I came off as acting “holier than thou” in some ways. I would walk in like I deserve more attention than I do. Rather than showing confidence, I would come off as cocky, and when it’s a girl it comes off as “bitchy.” I’m trying to work on that.

So when people look at you, what do you want them to see/think?

That’s a hard one because they can’t know that I’m nice right away. I guess I would want them to think that I’m welcoming. So I try to smile more now. I want to seem like someone you would be happy to talk to. As opposed to someone you’re afraid to talk to. Because I’m not scary!

What’s the most heartwarming thing you’ve seen or experienced?

When I was younger, my sister and I had a really strange relationship. She had some mental disorders and wasn’t very nice to me. It had been going on my whole life and I was probably around 13 at this age. So when my parents found out, they wouldn’t let me be alone with her. There was nowhere for me to go, and they couldn’t take me to a daycare because that was weird, so my sister’s bosses let me come every single day after school just to sit in an office and do 8th grader things. I would play video games, play games on my computer, etc. Eventually, I ended up working for them, which was pretty cool. They let me have my own money and gave me an opportunity. They gave this little 13-year-old girl – who they had no idea who she was – an opportunity to not be afraid every day, which was amazing. That was really sweet of them.

If there was one thing you could change about the world, what would it be?

I want to be a clinical child psychologist when I grow up, and I think I would change how people stigmatize mental health and mental disorders. Things like bipolar disorder or depression because I think it prevents a lot of kids from coming forward or it prevents doctors from diagnosing kids who absolutely need it. Then the kids grow up and live this life where they’re like “I’m alone,” “I’m weird,” and “I’m oddly aggressive all the time.”

It hurts so many people and we as a society are so against helping them just by acknowledging that it’s a thing because it’s gross to think about. It sucks to think about how people hit other people because they’re mad to a point where they can’t control themselves. It’s gross and makes you feel bad inside so people don’t feel anything at all. Instead of talking about it, we stigmatize it and people are afraid to come forward, and it ends up ruining lives. So, that’s one thing I would change about the world.