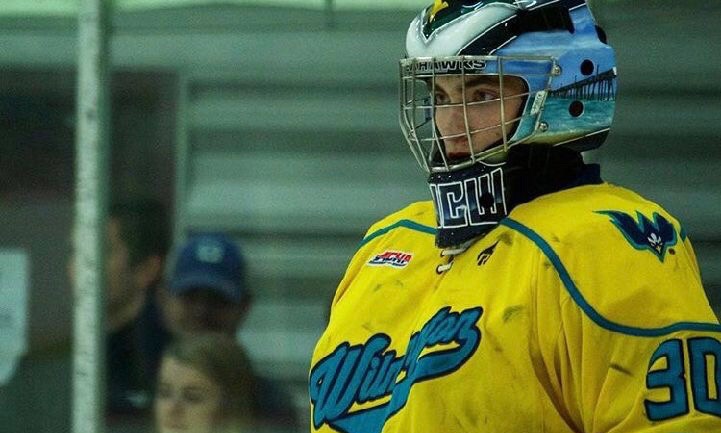 Editor’s Note: The following is the second installment in sophomore Ryan Besemer’s journey to become the starting goaltender of UNC Wilmington’s club hockey team. Part one explored Besemer’s hockey origins and the role its played in his upbringing. Part Two provides a lens into Besemer’s path to UNCW and where the ice hockey team can soar.

Throughout high school, UNC Wilmington goaltender Ryan Besemer attended a small school that did not have a hockey team so, through hockey, Besemer was forced to make friends through different high schools, which he considers a wonderful moment in his life.

“One thing I’ve grown to love about this sport is the community and the people it has brought me to meet. A lot of people will tell you that goalies are weird, and I agree at times, but I just embrace it. I do my own thing all of the time and hockey people just embrace it.”

As Besemer prepared to head to college, he always dreamed of playing hockey at the Division I or III level. However, without a high school team to play on and him not being able to play in the junior levels of hockey, he knew his odds were stacked against him.

Despite this, Besemer knew he wanted to play hockey in college, even if it was just at the club level. Besemer mostly looked at schools in the northeast because of this, however, he also wanted a school with a marine biology program. A unique mix that Besemer thought would be a challenge to find a school with both.

Besemer started to look at schools in the south and came across Duke and UNCW. With family friends in Wilmington that Besemer would visit with his family, Besemer was familiar with the Wilmington area and grew up loving it. Before going on a tour of UNCW, Besemer expected to end up at a school in the northeast.

As Besemer sat in the admissions auditorium waiting for his tour of UNCW, a slide show that was scrolling on a screen popped up a picture of the UNCW Hockey team. Besemer’s face immediately lit up and he would later find out that his tour guide had played on the team.

After seeing the campus and speaking to his tour guide about the team and the atmosphere at the Wilmington Ice House, Besemer had a new first choice on his mind. Besemer would later get to speak to the current team president Daniel Brescia about the team in his senior year of high school and after being accepted, Besemer decided it was blue, teal and gold for him.

Reflecting back on his first season at UNCW, Besemer said that his favorite memory of playing for the Seahawks so far has to be his first college shutout. In that game, Besemer saved all of Christopher Newport’s 42 shots to give the Seahawks a 3-0 win on the road in January.

A shutout for any goaltender can be special but what made that moment stand out for Besemer is the surprise he would receive that weekend. Besemer’s family decided to come to Christopher Newport and see him play without telling him. Besemer didn’t even realize his family was there until he spotted them in the stands.

As the season is underway, Besemer continues to see where everybody is hockey-wise and is excited to see new teammates fit into the team. Most importantly, Besemer expects the team to have a lot of work to do to take the next step to become a champion but he can’t wait to see the Seahawks give it everything they have.