World outside of Wilmington: A closer look at Oman 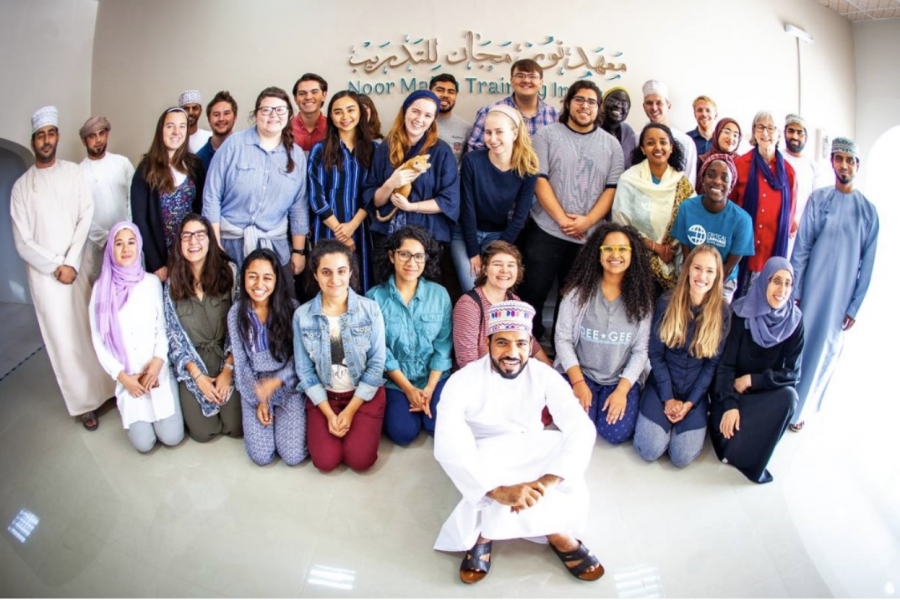 Jasmine Ceron with other students during her intensive language program in Oman through the Critical Language Scholarship.

Stories serve as a point of entry into a foreign culture in the same way that a preface sets the stage for a book. Jasmine Ceron, a UNCW student, visited Oman on a two month long intensive language program through the Critical Language Scholarship. The stories she brought back allow her to share her understanding of Omani culture. While one individual’s experiences can’t possibly define a culture, curiosity and observance illuminate central aspects of it. In this way, the following interview with Ceron offers a gateway to a deeper understanding of the country.

Jasmine Ceron (JC): “When men greet each other…in Oman and I think in some other Gulf countries, they’ll shake hands, they’ll lean in, and they’ll nose kiss each other, and they make a kissing sound… the first time I saw it I was slightly surprised just because of personal space, but the following times I thought ‘Ohhh that’s so sweet, I want to nose kiss someone too!” [laughing]

JC: “I was dropped off at the market and it’s tradition, it’s mandatory, especially as tourists, to bargain. So I went to the first store and he told me the price and in my mind I said ‘No, don’t accept that, it’s like three times the price it’s supposed to be.’ It felt like an accomplishment, I thought, ‘You got that cheaper than any other tourist would’ve gotten it!’ [laughing] I really liked the bargaining aspect.”

Ceron also spoke about the process of learning to get around in a city with no street names.

JC: “One time I asked my teacher [how to get to the post office] and he said, ‘It’s just like 3 KM that way,’ and we’re inside the classroom, and he’s pointing somewhere. [laughing] Sometimes I’d just ask him to draw maps for me.”

There is a very strong sense of tribal and familial community in Oman, and people generally marry within their tribes.

JC: “What happens sometimes is they get married and they get to know each other since they’re married and they’re allowed to talk to each other. But the marriage isn’t official and isn’t seen by the community, so they wait to have the wedding… it’s okay if you decide you don’t want to continue with that person. After however long they want to take they’ll have more of a ceremony… so usually the ceremony for the marriage is the signing of the contract and the father saying ‘I allow you to have my daughter.’”

JC: “[At the official wedding] the bride can wear whatever she wants, she can wear a Western-style dress, it can have slits and everything… because she will only be seen by women… and her husband.”

JC: “Religion is a big thing in people’s lives, but people don’t talk about it… [they have] the call to prayer five times a day. There’s a prayer room in the store, there’s a prayer room in the restaurant, there are prayer rooms everywhere… my language partner brought her rug with her and she did pray in front of us… she’s the only person I ever saw pray, everyone else would go in the rooms for their assigned gender.”

Sultan Qaboos, the autocratic leader of Oman, seized control of the country in 1970. He used his dictatorial power wisely, modernizing Oman while preserving its cultural integrity. For that reason, Omanis have an immense amount of respect for him. This is evident in the fact that most houses have multiple pictures of him and the commonly used phrase “You are number one after Sultan Qaboos.” In Arabic, this is said “Nta awul bad Sultan Qaboos”, or “انت أول بعد سلتان قابوس.”

JC: “He’s always number one because he helped them build hospitals, and everyone does truly believe in and feel so much appreciation for Sultan Qaboos. They feel they’re so much better now than they were before, they have education and what not.”

However, Qaboos is aging and growing increasingly ill with no chosen successor. Ceron asked people their thoughts on who would follow him, and she received varied responses.

“I hope he lives forever. I believe God will take care of it. I think whoever comes after him will be good because he is good,’ said one person Ceron spoke with.

Although there was a taxi driver who had the opposite view.

“No, I’m really scared because I know that people are corrupt sometimes,” he said.

Oman is a stunningly complex country with a fascinating culture, a strong sense of community and an uncertain future. Ceron’s excursion into Omani society offers insights into the intricacies of a country guided by both traditional and modern ideals. Her account demonstrates the value of inquiring about others’ beliefs and pursuing an understanding of foreign ways of life.