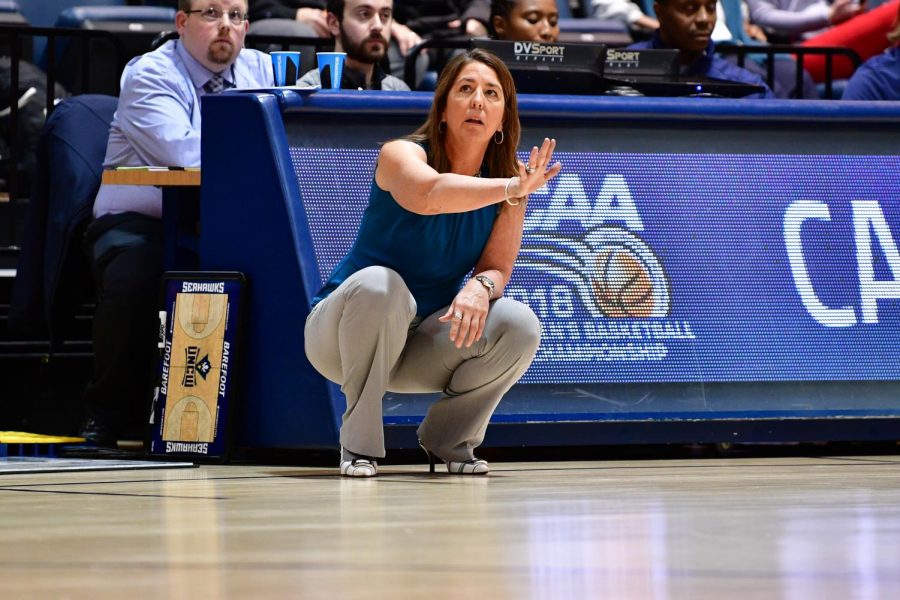 Karen Barefoot calls out signals to her team in a UNCW women's basketball game during the 2017-2018 season.

A portrait sits outside the offices in Hanover Hall that shows Karen Barefoot, in her element, all in one picture. The portrait showcases what UNC Wilmington women’s basketball is all about.

“Join the championship effort,” it says.

“That’s the kind of effort we are going to give every day. We’re going to give 110 percent. Not 100. We’re going to do one more,” said Barefoot, who finished her first year as the program’s head coach in March.  “In our drills, we talk about doing one more. If I say my goal is eight, I say what is the goal and they say 10 or nine. They know we’re not just going to be here, we’re giving that extra championship effort.”

Barefoot came to UNCW fresh off of 22 years of experience at schools like Lenoir-Rhyne, Old Dominion, and Elon with a reputation for turning programs around. Barefoot was given her first coaching position at 22 years old. Her ability to be successful came from how she was brought up, always being told she was not good enough.

She has always sought to prove them wrong.

“That’s me my whole life. I was like, I’ll take any challenge. I love it. That is probably why I love turning programs around,” she said. “Because the way I always had to earn being out on the basketball court. I would earn a pick-up game. That is kind of my mentality as bring it. I don’t care who it is.”

Barefoot brought this mentality to the women’s basketball program, leading a team that was in shambles in prior years to helping the athletes enjoy basketball again. It came down to playing for something bigger than one’s self – for the school and the community around it.

“We got eight new players. With those eight players and everybody else returning, I think this program is going to be exciting,” Barefoot said of the program’s future. “We could compete for a championship. If you ask me, people would say, ‘Are you crazy? Y’all have never won a championship.’ But this team will tell you: why not us? Why not make history?”

Barefoot enjoys what she does every day as the women’s basketball head coach and tries to encourage her team to play their best. She views her role as a teacher and instructs her team and her staff to leave it all out on the court and give their all — win or lose.

“Every day I try to get the staff around me to understand you have got to have good energy, we have got to teach and reach every day. They take no possessions off,” she said. “We’re really going to get after it every day, we’re going to leave it out there. We gave all, we gave our best. I think that mentality is more of a championship mentality.”

Barefoot has gotten the buzz around women’s basketball to return after just one year at the helm and she sees it as a taking off point for getting everyone involved, including the student body and fans.

“We’re really excited,” she said of the upcoming 2018-19 season and beyond. “We feel like we’re going to put this program on the map and really do some big things.”