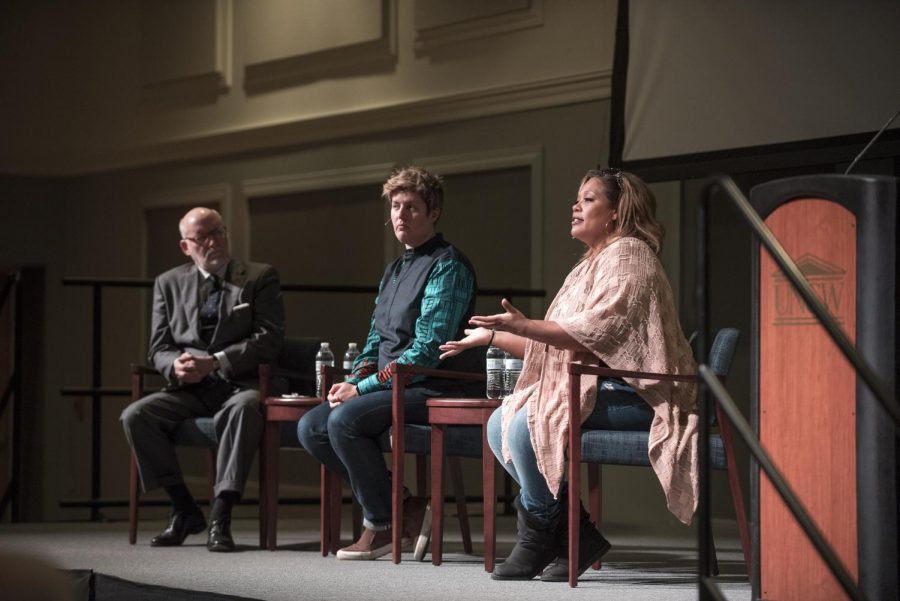 Courtesy of Jeff Janowski | OUR

For the last Leadership Lecture of the semester, the Campus Life Arts and Programs coordinated a moderated discussion between CNN political commentators Sally Kohn and Tara Setmayer, holding this event on Monday, Mar. 19, from 7 to 8 p.m. in the Burney Center.

The Leadership Lecture Series is produced by Campus Life Arts and Programs and features speakers throughout the academic year. Some of the co-sponsor’s for the Mar. 19 lecture include the Women’s Studies and Resource Center, the Association for Campus Entertainment, Her Campus, Speechawks, the Leadership Honor Society [ODK], the Historical Society and the Mimi Cunningham Speaker Endowment of the Department of Communication Studies. 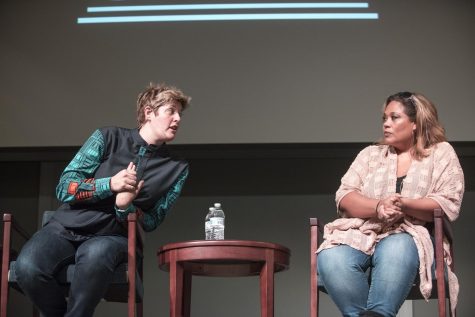 Courtesy of Jeff Janowski | OUR

Kohn and Setmayer, both political commentators for CNN, have been working within the world of politics for years. Kohn is also a columnist and has written for outlets like the Daily Beast, Time Magazine and the Washington Post. The Advocate magazine ranked her the 35th most influential LGBT person in the media today. Prior to joining CNN, Kohn was a Fox News contributor.

Setmayer has appeared on CNN prime time programs, ABC’s The View, Good Morning America and HBO’s Real Time with Bill Maher. Before her career as a political commentator, Setmayer was a communications director on Capitol Hill and currently is the Board Director for Stand Up Republic, a nonprofit formed after the 2016 election “to unite Americans behind the defense of democratic norms, ideals and institutions.”

The first question Dr. Weber, the moderator, asked of Kohn and Setmayer was how they came to the specific ideologies they now hold?

Kohn explained that she grew up in a liberal family outside of Philadelphia that did not question the status quo. Once she went to college, she attributes her political leanings to what she learned. Setmayer was raised by a single mother in North New Jersey, and said that, since her mother had her at a young age, they “grew up together.” One thing that they learned about together was political ideology; and although Setmayer’s mother initially believed herself to be a liberal, further research showed her that she leaned more conservatively.

The discussion then turned to the topic of colleges as “safe spaces.” Kohn argued that liberal speakers were protested more on college campuses in 2016 than conservative ones, which does not fit the conservative rhetoric shown in the media. Though The Seahawk could not find statistics to prove this statement, an article from Inside Higher Ed discussed how conservatives protested liberal speakers on campuses like Harvard and Catholic Universities, asking the question of “Who is Blocking Campus Speakers Now?”

Setmayer, who did not agree with Kohn’s statement, did agree that Ann Coulter said horrible things about Mexican Americans, “but she should not be stopped from talking.” She said that the Trump era “unearthed a lot of ugliness…which was eye-opening for me.” This segued into the topic that took up the majority of the conversation: bipartisanship.

Setmayer said that people are tribal, but that we should be working towards a point in which individuals can disagree on a matter without “going at each other’s throats.”

Kohn joked that her and Setmayer got along, that they both enjoyed Bon Jovi. And when asked if she thought partisanship is the enemy of civil discourse by UNC Wilmington Alum Becki Fernandez, Kohn replied “yes.” When one has to “shoe horn” themselves in to “this or that” it becomes problematic.

“If we had multiple parties,” Kohn said, “we would see a range of opinions. If you see disputes with in parties, you’d then see a wide variety of viewpoints.”

Setmayer chimed in by stating that the founding fathers did not intend for us to have political parties; “hyperpartisanship is turning to tribalism.”

“It is irrational,” Setmayer said. She said that she does not think anyone wants solutions; they want to argue their points only. “It is dysfunctional in a way that is unhealthy.”

As for what students can do to remain knowledgeable on political topics and promote civil discourse, both agreed that conscientious consumerism of news and information is key.

The event was moderated by Dr. Weber of the Communication Studies Department, who earned his M.S. in instructional design from the University of Southern California as well as his Ph.D. in organizational communication at the University of Denver. He has worked in the private and public sector, working with companies like Xerox, Disney, Frito-lay, General Motors and more to facilitate solutions-focused processes in group settings.

For the 2018-2019 year, Campus Life has scheduled two speakers: Tarana Burke and Derreck Kayongo. Burke, creator of the #MeToo movement and advocate for young women of color who survived sexual abuse and assault, will speak Sept. 26, 2018. Kayongo, a Ugandan refugee turned entrepreneur and human rights activist, will speak Mar. 27, 2019.