Survival of the Friendliest: The evolution from wolf to dog 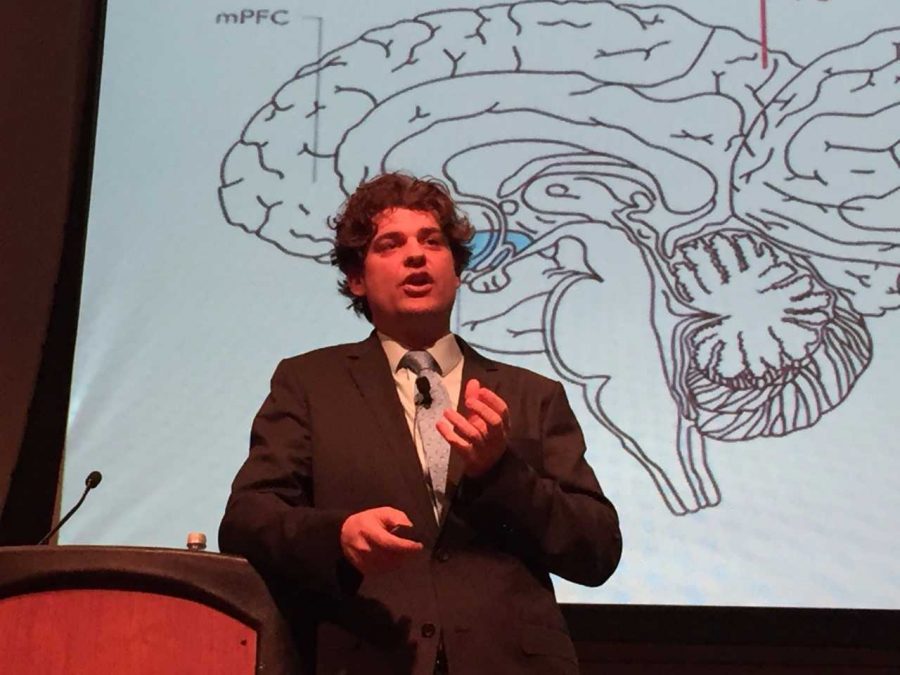 Brian Hare, a Duke University professor, explains to a UNCW audience how dogs’ brains work when they are happy Thursday night at UNCW’s Burney Center. – Photo by Aliyah Harris

“Dogs evolved through natural selection … It was the advantage of being a wolf that was friendly and able to approach humans as humans began to become more sedentary,” said Dr. Brian Hare, the Duke University professor during his lecture called “Survival of the Friendliest: From Dogs to Democracy.”

In other words, dogs developed into the ones known today because they became friends with humans when humans no longer moved from place to place.

Hare is a New York Times bestselling author with his book, “The Genius of Dogs: How Dogs Are Smarter than You Think.” He also founded the Duke Canine Cognition Center in North Carolina and has a Ph.D. in Biological Anthropology at Harvard University, according to Hare’s biography on his website.

“Survival of the Friendliest: From Dogs to Democracy” was a lecture by Hare for the UNCW Honors College Spring Speaker Series. His lecture centered on the topic of what made evolution successful and what part dogs had it in.

His theory was that friendliness had a huge role in how dogs advanced. It was and is a trait that is still present in other species: wolf pups, humans and their closest relative, bonobos.

To test his theory, Hare conducted studies in places throughout North America, Africa, and Eurasia, observing the behaviors of these species and ones related to dogs. He also would study these behaviors through mental exercises like memory and movement testing, according to Hare’s biography on his website.

A breakthrough for his theory came when Hare traveled to the mountains of Siberia, Russia to study foxes, relatives of dogs known as Belyaev’s Foxes.

“These are a population of foxes that by the time I arrived, for 45 years, had been selected to do this: they were bred based on one criterion which is they liked to be touched and are attracted to humans,” said Hare.

In this study, there was a control line where the foxes bred with specific foxes and played with humans. The second line of the foxes bred at random and chose whether to interact with humans or not, according to Hare.

The result of this observation showed that the control line’s offspring had the physical features of relaxed ears and curled tails − features similar to dogs. They also showed signs of friendliness.

Many audience members, ranging from UNCW students to fans, agreed with the message of Hare’s lecture. A dog training foundation even had their own evidence to back up his theory.

“We have a custom breeding program that we use to breed dogs that have the appropriate temperament, size, and personality to be trained … Statistically speaking, that is what we find more success as service dogs,” said Chelsea Deaner who is an IT program manager at the paws4people foundation.

Paws4people is a foundation that provides homes for dogs and trains them to become service dogs. This foundation, located in Wilmington, North Carolina, has more than 200 volunteers and service dogs, according to the paws4people foundation website. They also work with UNCW, providing assistance/training for the students and their dogs.