Local politicians are to blame for the Parkland shooting 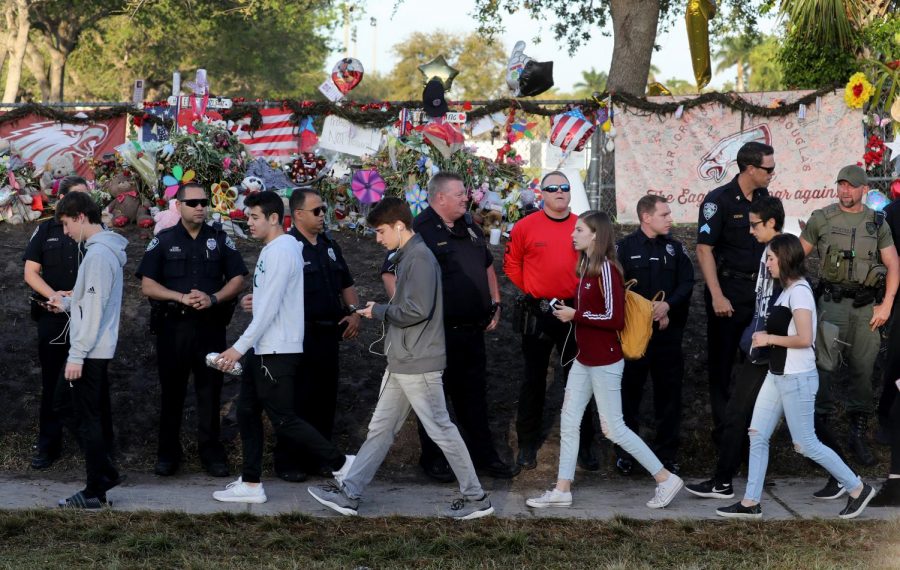 Students from Marjory Stoneman Douglas High School returned to class on Feb. 28th 2018 after the loss of 17 lives during the Valentine's Day shooting.

Editor’s Note: Jack DeVries is a junior at UNCW double majoring in supply chain management and business analytics. Jack also works as The Seahawk’s Copy Editor and is a frequent writer for the Political Perspectives column. All opinions expressed in this article are solely those of the author. All suggestions and inquiries may be sent via email to sld9240@uncw.edu.

Today marks one month since the shooting at Marjory Stoneman Douglas High School in Parkland Florida. The aftermath of this shooting has been a media circus, with accusations of fault, blatant misinformation, and conspiracy theories flying.

Across the country students have voiced their opinions by walking out and holding moments of silence for the killed and injured. Some pray for remembrance and some hope for gun bans that will never come.

In the wake of any mass shooting, there are normally two distinct reactions. Generally, the most vocal tend to fall into a “thoughts and prayers” category or a “repeal-Second-Amendment-now” category.

These two factions, usually defined by their loudest members, are rightfully outraged and saddened by the tragedy. On the surface, both of these reactions are noble. Unfortunately, in America today, history has shown that neither prayers nor gun bans will prevent future violence. This can be seen most recently with the bump-stock outrage following the October 1 Las Vegas shooting.

It has been over five months since alleged shooter Stephen Paddock killed 58 people in Las Vegas with bump-stock equipped semi-automatic rifles. While both sides of the bump-stock debate were vocal about their proposed remedies, essentially nothing was done. In fact, the FBI has yet to even release a motive, let alone video of the suspect before the shooting. In the meantime, mainstream media sources have done little investigative reporting.

While even the NRA supported regulations on bump-stocks, Democrats like Sen. Diane Feinstein proposed broad and clumsy gun control bills that had no chance of passing. After about a month, even Democrats in Congress stopped pushing for gun control. Together, these reactions by officials, media personalities and organizations have led the shooting to be all but forgotten, leaving only conspiracies to fill in the gaps.

The recent mass shooting at Parkland Florida’s Marjory Stoneman Douglas High School will receive this same fate. The perpetrator will be brought to justice, and the lives lost will be certainly be remembered, but gun control just won’t happen.

While vastly different scenarios, the Parkland Florida and Las Vegas shootings share similarities. In both cases, the FBI and local policing agencies have failed the public. While Las Vegas could be chalked up to simple lack of transparency after the fact, the tragedy at Parkland shows a systemic breakdown on a grossly large scale. Which led to the absolute failure to prevent violence, something that no gun control bill can solve.

The suspect Nikolas Cruz, who once attended the school, killed 17 people with a semi-automatic rifle. Nobody was surprised he did it. Classmates, neighbors, even a YouTuber came out of the woodwork to say they had reported Cruz before. Immediately, evidence of failure within local and federal law enforcement was clear.

While some misguided survivors have used their publicity to blame the NRA, Congress and Florida Gov. Rick Scott, the real carelessness is much closer to the community. Multiple reports showed Cruz had even made death threats to peers, something that school officials knew about. A glance at his now-removed social media showed he was unwell at the very least.

How was Cruz able to own guns you may ask? Surely someone who made death threats and has been expelled from school for bringing ammunition is in the criminal justice system, right? Wrong.

In Broward County Florida, crimes committed on school property often go unreported to the police. According to Sherriff Scott Israel in an interview with CNN’s Jake Tapper, “the school has the ability under certain circumstances not to call the police, not to get the police involved on misdemeanor offenses and take care of it within the school. It’s an excellent program.” This program is known as the PROMISE program.

We all know how this played out for Nikolas Cruz.

It’s easy to blame the other side of the political aisle. It’s easy to blame all gun owners. Even easier to blame politicians a thousand miles away. Congressional politicians in Washington are responsible for plenty of the issues in our society, the Valentine’s Day shooting in Florida is not one of them.