A look at party polarization 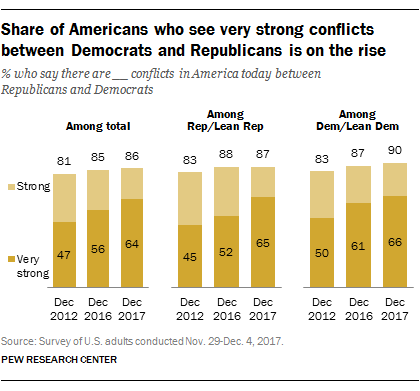 Editor’s Note: Kristen Rodriguez is a freshman at UNCW majoring in Political Science with a minor in International Relations. Kristen is a staff writer for The Seahawk and writes many of the pieces featured in Political Perspectives. All opinions expressed in this article are solely those of the author. Kristen may be found on Twitter @kristen_rodd. All suggestions and inquiries may be sent via email to sld9240@uncw.edu.

Since the start of the 21st century, we’ve seen a rise of polarization in American politics. Put simply, Republicans have become more republican and Democrats have become more democratic, leaving a wider gap in between the two.

This has been increasingly apparent in the last two years, not just in Congress (where Republicans and Democrats struggle to compromise), but also in the American public; where political ideology has been in the spotlight.

It spreads out further than social media debates with people you’ have never met before. It reaches out to large movements that hold marches and protests, and even to political organizations deciding whether to support a candidate based on their beliefs.

Political ideology has become an essential part of people’s lives. It can dictate whether someone wants to associate with another person. It also can change the way you are treated and has created a new box for us to check off.

Pew Research Center (a nonpartisan think tank which provides information of social issues and public opinion trends in the U.S.) has done extensive research on party polarization in the United States and found that we are more polarized than we have been in the last twenty years.

Party antipathy is also at its highest, meaning that the parties have little trust of one another, and even find the opposing party to be a threat to our government. Pew also found that people on the farther ends of the spectrum are more likely to participate in political activities such as voting and activism, making it so the majority of the people who contribute to our political environment are very deep in their views.

Polarization goes deeper than just across party lines. Polarization can also be found within parties. A recent controversial example is DNC committee chair Tom Perez refusing to say whether it will run candidates who oppose abortion rights when last year he said that abortion rights is a “not negotiable” factor in democratic nomination.

Reproductive rights are an ideal a lot of Democrats hold, so how will they make room for members of their own party who do not hold that ideal? The answer some might give you is that their personal views do not matter as long as it is not reflected in their legislative choices, but is that a risk the DNC will take?

Republicans have had a similar issue, with Tomi Lahren, a popular conservative TV personality. Last year, Tomi was the host of her own show, “Tomi” on the Blaze. However, the show was canceled after Lahren stated in an interview on “The View” that she was pro-choice, which is typically not seen as a conservative ideal.

More topics have become non-negotiable for all parties and it has become increasingly difficult for the public to look past their ideological differences and meet on common ground. It has been reflected in our current government. Congress has been gridlocked on many issues during this administration and everyday a new scandal comes out about politicians going after one another.

From here on out party polarization is only going to widen the gap even more, which makes open conversation more important than ever. There is no way for one group to get their way every time, so the only way to move forward is to find a middle ground that everyone can live with.