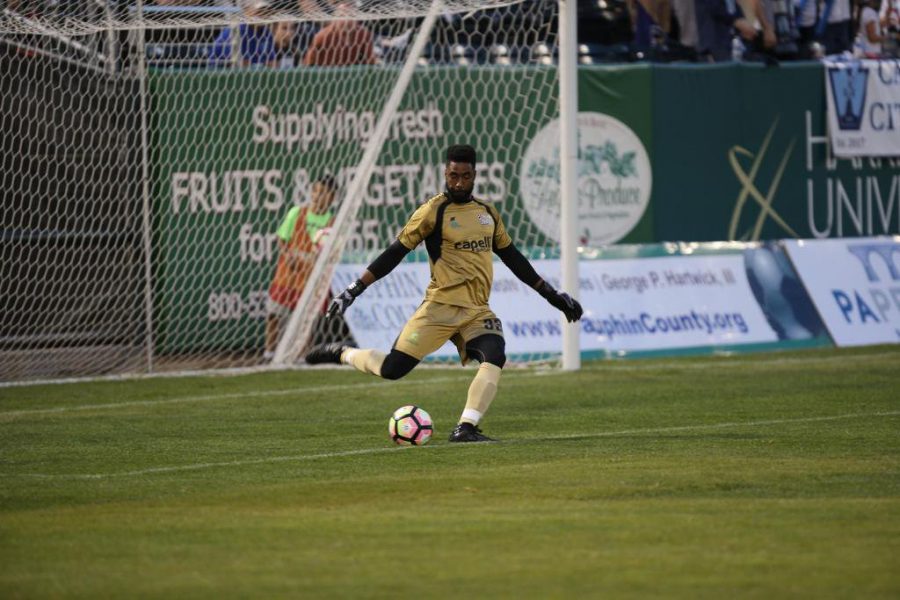 Brandon Miller as a member of the United Soccer League's Harrisburg City Islanders.

UNC Wilmington men’s soccer alum Brandon Miller recently took the next step in his professional soccer career by signing with the Charlotte Independence ahead of the new United Soccer League (USL) campaign.

The Charlotte native, who was the 2015 USL Goalkeeper of the Year, returns to his hometown after a one-season stint with the Harrisburg City Islanders.

Miller, who won the GKOTY award as well as the 2015 USL Cup while a member of the Rochester Rhinos, currently holds the USL records for most shutouts in a season (13) and lowest goals-against average (0.54). He has also played for Orange County Blues during his seven-year professional career.

Speaking to The Seahawk, Miller buzzed about returning home to play in front of friends and family as well as making an impact in the community.

Miller recently started a goalkeeper-specific soccer brand in order to make a bigger impact in the youth soccer community. Prime Focus GK aims “to give goalkeepers quality gloves and apparel to train in,” as well as arm young players with confidence and better technical skills.

Having played four seasons at UNCW from 2008-11, Miller was able to draw from his personal experiences as a Seahawk and reflect on how the lessons he learned back in college have aided him professionally. Specifically, two virtues have rung true: patience and work ethic.

“I didn’t become a full-time starter until my senior year so I spent the majority of my first three years on the bench biding my time.  Ironically, that’s how my professional career started off as well,” Miller said. “My time at UNCW taught me to simply work hard and be patient, be ready when called upon and take advantage of every minute you get on the field. It paid off in my fourth season at UNCW (with a first team all-conference selection) and it paid off in my fourth season professionally (first team all-league, goalkeeper of the year, league championship).”

During the interview, Miller recounted many discussions he had with a man whom he considers a mentor: longtime UNCW men’s soccer coach Aidan Heaney. Miller credited Heaney’s presence in his life as a major factor in the success he has had in his career to date.

“The one [conversation] that stuck out the most was when he told me, ‘Things aren’t always going to go your way, but you have to understand that people naturally gravitate towards you and feed off of your energy so if you are constantly giving off negative vibes it can greatly affect the team,’” Miller said.

The 28-year-old goalkeeper said it was that conversation that marked a turning point in in his UNCW career and became advice that has stuck with him since then. Looking back, he said his experiences as a Seahawk molded him into the person and player he is today.

Speaking on the current state of the UNCW program, which made the second round of the NCAA College Cup this past season, Miller said he’s, “Proud of how the program has grown,” and said it has a “high ceiling” after establishing itself as a consistent CAA contender.

He believes the program is well-poised to become NCAA contenders on a consistent basis.

Staff Writer Lanre Badmus can be found on Twitter @LonnyBadmon . Any tips or suggestions should be forwarded via email to uncwseahawksports@gmail.com. For video updates from The Seahawk, subscribe to our YouTube channel.