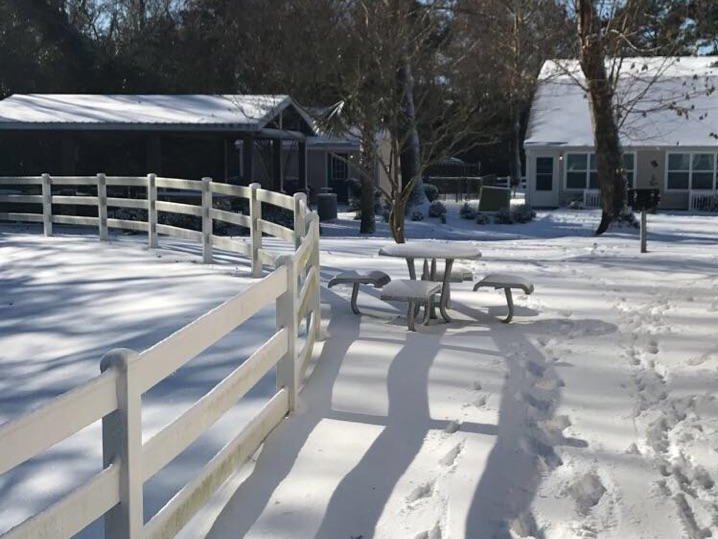 Snow from Winter Storm Grayson blanketed the Wilmington area with snow Wednesday, Jan. 3 into Thursday morning. Some areas of the city received as much as four inches.

When I decided to attend UNCW I based it partially off the fact that it is a beach town. I never expected it to snow, but then it did. The snow occurred about a week ago on January 2. It is now the following week of January 9 and there are still plenty of icy spots not just on campus but all over Wilmington.

I expected — despite the fact that Wilmington hardly receives snow — that the efforts to clear the roads and sidewalks would start immediately like they had back in my hometown or at least the next day. Despite my hopeful wishing, a week later there is still plenty of work to be done.

In various emails sent out by the campus, they warned of these icy spots and told students to wait until daylight hours on Sunday to return to campus. In their latest weather alert from January 6 they mentioned how by Monday’s — first day of classes — warming temperatures the icy and shady spots would probably still be there and to “exercise extreme caution in traveling on foot and by vehicle on and around campus.”

As a student who did not ever think I would have to worry and “exercise extreme caution” when traveling on campus I am frustrated with the apparent lack of efforts or extreme unpreparedness the campus has when addressing this issue. I understand maybe not having everything cleared the day after, but I cannot fathom still not having the entire or at least the most commonly traveled parts of campus cleared a week later.

Since returning to and walking around campus I have heard so many students complain and voice concern over the icy and snowy spots on campus. Luckily, I live on campus so I do not have to worry about the roads as much as commuter students. Although, I still have to be careful walking to class because it is still not safe or smart for me to ride my bike yet. I have already seen a few bikers slide and fall on the ice.

It is not just campus that still has these unsafe conditions, but there are still spots all over Wilmington. It is one thing to still have these icy spots, but what makes it even more unsafe are the rainwater or flood ditches alongside roads. The days leading up to my return to campus I saw my fair share of cars stuck in ditches because their car had slid on the huge patches of ice and landed them in the ditches. I found myself even more on edge when I reached campus limits and found just as many icy patches.

Main roads like South College seem to be mostly cleared minus turn lanes, but there are still plenty of side roads or neighborhood roads — which people use just as frequently — that have not seen clear and safe roads since before the snow fall. Due to these still disastrous conditions, my younger sister has not been back to school since January 9 and even then, it was with a two-hour delay.

Even a picture posted by the official Facebook page of the city of Wilmington on January 6 depicted poor road conditions off of Front and Third Street. Following these still apparent poor and unsafe conditions around town I am urging not only the campus, but the entire city of Wilmington to better prepare themselves if God forbid it ever snows again in Wilmington. Now I’m not saying we need the same preparedness levels as cities up north like Chicago, New York or Boston.

Instead, I’m saying our city should at least become better prepared for the level of snow we received on January 2 so that we will not have icy and dangerous spots all over town. Instead of using the excuse of waiting for warmer weather, Wilmington should take a tip from their northern city counterparts and start clearing at least by the next day after the snow has stopped. With better steps of preparedness our campus and city will be able to better keep its students and citizens safe.

Thank goodness it is finally getting warm and the sun is out, otherwise myself and others might find ourselves slipping and sliding all over the place. I know Wilmington is trying, but for everyone’s safety — and my sanity — please try a little harder next time.