Trump, do not stop at Pakistan

Editor’s Note: Jack DeVries is a junior at UNCW double majoring in operations management and marketing strategy. Jack also works as The Seahawk’s Copy Editor and is a frequent writer for the Political Perspectives column. All opinions expressed in this article are solely those of the author. All suggestions and inquiries may be sent via email to sld9240@uncw.edu.

Last week the Trump administration announced that it would withhold aid to Pakistan. Islamabad, Pakistan’s capital, uses this aid to defray the costs of preventing terrorism. Up to 1.3 billion could be withheld from the south Asian state.

The suspension in aid is the result of President Trump’s frustration with Pakistan. According to Trump, Pakistan has portrayed a reluctance to crack down on terrorism. Washington officials claim that some Pakistan intelligence agents have terrorism ties.

Trump, like always, had a scathing tweet to go with the announcement. “The United States has foolishly given Pakistan more than 33 billion dollars in aid over the last 15 years, and they have given us nothing but lies & deceit, thinking of our leaders as fools. They give safe haven to the terrorists we hunt in Afghanistan, with little help. No more!” Trump later went on to agree with Sen. Rand Paul’s bill to completely halt aid to Pakistan. 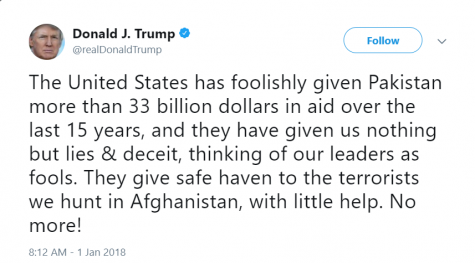 Unfortunately for American tax payers, Trump is correct. The United States has sent billions in both security and financial aid to Islamabad. In the meantime, Pakistan has been negligent at best and complicit at worst in the fight against terrorism.

The topography of Pakistan’s northern border makes it a perfect hideout for terrorists. The Durand Line or mountainous border between Afghanistan and Pakistan has been the subject of American scrutiny since the early days of the Afghan war. The mountain region has many cave systems, which are often used as hideouts for terrorists. Pakistan’s negligence has played a large part in terrorist’s successes in the region.

Groups like the Afghan Taliban, Al Qaeda, and the Haqqani Network have hidden in the shadows of Pakistan. The harboring of Osama Bin Laden should have been the last straw.

A New York Times article from 2001 states that Pakistani intelligence used Al Qaeda training camps to help train covert operatives. The article goes on to make more claims, including “[Pakistan] Inter-Services Intelligence, or I.S.I., maintained direct links to guerrillas fighting in the disputed territory of Kashmir on Pakistan’s border with India”. Regardless, the aid did not stop.

Strictly speaking, this suspension is justified and the United States should consider going further.

Pakistan should, at the very least lose the title “major non-NATO ally”. Banning the sale of weapons to Pakistan would be another safe option for Trump. Even threatening to name Pakistan a “state sponsor of terrorism”, would be defendable.

This recent suspension in aid brings about an even bigger question. Just how much do we spend on foreign aid?

Although less than one percent of the federal budget is foreign aid, the numbers are still interesting. According to USaid.gov, $49 billion went to foreign aid in 2016. Obviously some aid goes to great causes, but as is the case with Pakistan, some does not.

Is sending money abroad the best way to help Americans at home?

These rough estimates do not even begin to factor in what the United States military spends abroad or money wasted domestically, or money lost inside the bureaucratic machine that is Washington.

We will never get to the bottom of government waste if we don’t start somewhere.